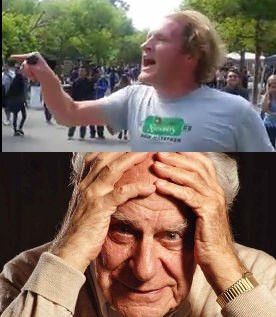 I’d be alot freer if people like you were put in prison… as retaliation for the COLLECTIVE CRIME OF RACISM, ANTI-SEMITISM, MISOGYNY AND HOMOPHOBIA!

The self-righteousness and hypocrisy are louder and plainer than usual, but the animating force is the same narrative broadcast by the media, taught in schools and, ironically, preached in mainline Christian churches.

As I noted in The Nature of Jewish Power – Part 2, philosopher jew Karl Popper put it this way:

Jewish rhetoric about tolerance is best understood as an effort to promote the best interests of jews. From the screaming queer nobody to the world-renowned philosopher, jews don’t have any qualms about dictating to everyone else what “we” should do to best serve them. “The dirty goyim” should recognize this double-talk for what it is: dishonest, destructive, criminal, intolerable.

19 thoughts on “Tolerance (the Berkeley-Popper Mix)”