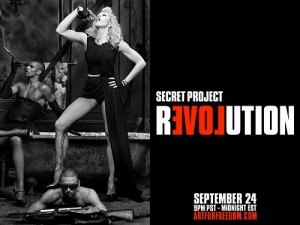 This sophomoric nonsense is the product of a 55 year old woman whose view of the world really comes from her own isolation from reality.

“Economic markets are collapsing,” she intones. “People all over the world are suffering.” But the real enemy is intolerance. “I keep telling everyone I want to start a revolution, but no one is taking me seriously,” she complains, and it’s all because, “I’m a woman. I’m blond. I have t - - s, an ass and an insatiable desire to be noticed.”

If shock value were currency, Madonna would be the richest woman in the world.

At last night’s premiere of her new short film, the previously top-secret “Secretprojectrevolution,” she pulled out all the stops to get her political message across: Asking everyone in the audience to sit on the floor of New York’s Gagosian Gallery, including several A-listers, she blurred the lines between pop art and interpretive dance in the name of fighting oppression and discrimination.

The 17-minute short, a black-and-white collaboration with photographer Steven Klein, is indeed disquieting. Madonna plays a jailer and a prisoner, sings an eerie rendition of “My Country, ‘Tis of Thee” and there are guns and blood and a stroller on fire (things to know before cueing it up at the office). She also serves as the narrator, issuing a call to arms for the world to join her in a “revolution of love.” In Madonna-speak, this means standing up for those who are discriminated against because of their race, gender, religion or sexuality. 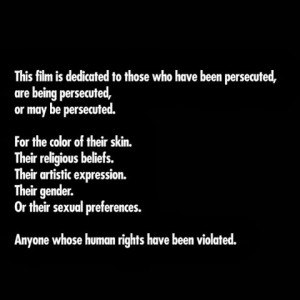 In a press release days earlier Madonna said “secretprojectrevolution,” as the film is formally called, would be a “call to action and give people a place to voice their own creative expression to help fight oppression, intolerance and complacency.”

For a party, there were an awful lot of instructions from the pop star. Before the projection began, Madonna requested that everyone sit down, and so the black-and-white short film played out with everyone cross-legged on the floor, like in art class. The bar staff was instructed to stop serving or refilling wine until after the performance was over. And no one was allowed to leave until the end

: the usually violent attempt by many people to end the rule of one government and start a new one

: a sudden, extreme, or complete change in the way people live, work, etc.

: the action of moving around something in a path that is similar to a circle

An elite revolt against the revolting elite? Not even close. It’s the dog chasing his tail sense of the word revolution that applies here. The point of Madonna’s secretprojectrevolution is not to foment violence or change. Quite the opposite.

A more accurate name would have been projectlookatmelookatmemoreofthesame. It’s just more of the same old hypocritical moralizing against oppression, persecution, discrimination and intolerance – of “minorities”. As every member of the “minority” at the tippity-top of the judaized elite well knows by now, whether you’re a jew or not you had better be able to mouth all the right jewish platitudes. Or else.

Even well-established critics find Madonna’s performance art recasting of the well-established jewish narrative “insufferable”. Why? The message is too overt, too vague, too heavy-handed, too flip. The messenger is also at fault. She’s too privileged and prosperous, too obviously posturing and self-absorbed.

Though challenging the judaized elite or their sensibilities is probably the last thing on Madonna’s mind, her “sophmoric nonsense”, this 17-minutes of burlesque holocaustish harangue, is so absurd it might do some harm.

There’s no real need for her to supply such nonsense. The jews, their media and their puppets already provide a constant stream of authorized and offical nonsense.

Sophmoric reinterpretations and regurgitations of the jewish narrative pose a threat to the extent they broaden and thereby dilute and distort that narrative. The whole purpose of favoring “minorities” is to benefit the jewish “minority” that’s on top, pimping that narrative. Thus Madonna, so celebrated for vulgarizing all things goyishe, becomes “insufferable” in this case exactly because she’s vulgarizing something so ineffably jewish.

9 thoughts on “When Revolting Elites Revolt”