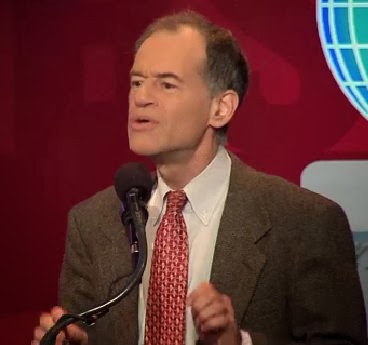 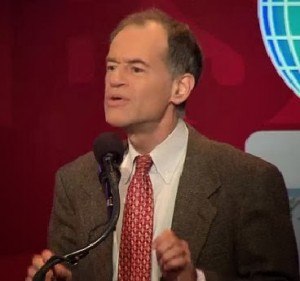 Ron Unz is one of the relatively small number of jews who is mistaken as a “conservative”, in part because he was the publisher, until recently, of The American Conservative. As typical for jews, Unz doesn’t constrain himself to the usual left-right dichotomy.

Last year Unz wrote The Myth of American Meritocracy. In it he notes:

elite college admissions policy often consists of ethnic warfare waged by other means, or even that it could be summarized as a simple Leninesque question of “Who, Whom?”

His analysis distinguished jews from Whites (as “non-jewish whites”), but focused mainly on Asians (as “the new jews”). Given his anti-White attitudes, detailed below, this was likely an inoculative effort aimed at replacing more direct complaints on behalf of Whites.

Unz’s participation in a recent non-debate about immigration provided a window into the kind of discussions which take place amongst the thoroughly judaized anti-White elite. Here, as usual, Unz comes across as “conservative” only in that he expresses more concern than the other participants to prevent a backlash against that elite:

The reason America in its history, largely avoided the disastrous political results of many European countries is that every decade Americans were wealthier and better off than they were before. That’s no longer true today. And it’s no longer been true for 40 years now. Allowing an unlimited number of impoverished foreign workers to come to the United States would obviously make that situation incredibly much worse. And the result would be an economic disaster.

It’s true that possibly 1 percent or 2 percent or even 5 percent of Americans would benefit tremendously from that change. But probably 90 percent of the American population would suffer economically. And they are the people who vote. They are the people who can protest. And their views would certainly be made known. And the result would be tremendous political backlash. We have to ask ourselves whether one reason for many of the problems we’ve had in the last few decades economically is because the glorification, the amplification of theoretical concepts that may look very good to pure economic theorists, people basically spend their time in the ivory tower, but don’t understand that ordinary workers suffer when their incomes don’t rise for 40 years.

The apoplectic response of the south Asian immigrant (whose main concern is that America remain open to south Asian immigrants, even though he says they don’t really want to come and the internet makes it unnecessary) was to misinterpret Unz as speaking in favor of the Whites they both see as their enemies, “these Tea Party anti-immigrant people who [go] around creating fear about the billions who are going to invade America and take away our jobs”.

Twenty years ago Unz was campaigning to become governor of California, posing as a “conservative” while making the ridiculous argument that the state would be bankrupted not by immigrants but by the effort to cut off benefits to those immigrants. As he demogogued in the Los Angeles Times in 1994:

Most Californians view illegal immigrants as unwanted house guests. One very effective means of getting rid of such guests is to set your house on fire and burn it to the ground. This is Proposition 187’s solution to illegal immigration. It would be a financial and social disaster for California, and the worst moral disaster for our state since the internment of Japanese Americans. No decent Californian should support it.

Proposition 187 passed but was never enforced. The will of a majority of California’s Whites, including my family, was ultimately nullified by a single judge. As I’ve noted before, Governor Pete Wilson warned that immigration would bankrupt the state. It did.

For that Wilson is nowadays demonized. Though Unz-like disdain for Whites and White political interests has gone mainstream, Unz himself continues to dissimulate, posing as a rebel. His new website, The Unz Review: A Collection of Interesting, Important, and Controversial Perspectives Largely Excluded from the American Mainstream Media, includes a reposting of his cover story for Commentary, the neocon journal of the American Jewish Committee, in late 1999. California and the End of White America begins:

Californians of European ancestry—”whites”—became a minority near the end of the 1980s, and this unprecedented ethnic transformation is probably responsible for the rise of a series of ethnically-charged political issues such as immigration, affirmative action, and bilingual education, as seen in Propositions 187, 209, and 227. Since America as a whole is undergoing the same ethnic transformation delayed by a few decades, the experience of these controversial campaigns tells us much about the future of our country on these ethnic issues.

Our political leaders should approach these ethnic issues by reaffirming America’s traditional support for immigration, but couple that with a return to the assimilative policies which America has emphasized in the past. Otherwise, whites as a group will inevitably begin to display the same ethnic-minority-group politics as other minority groups, and this could break our nation. We face the choice of either supporting “the New American Melting Pot” or accepting “the Coming of White Nationalism.”

Unz sees that mass immigration and forced integration has had a genocidal impact on Whites. His main concern, then and now, is that this genocide continue unimpeded. He is even aware of this criticism. Commenting as “RKU” on Sailer’s blog in the wake of Breivik’s attack:

One very mainstream but very true explanation of the factors motivating the Oslo guy’s rampage was the exceptionally shrill and wild rhetoric found on lots of HDB, anti-Islamic, and quasi-WN websites. Both the management and the commenters are always accusing their political opponents of being “traitors” aiming at the “extermination” of their racial group via a deliberate policy of “genocide.” Traitors…extermination…genocide…traitors…extermination…genocide…

So maybe after many years of reading all those websites, the Oslo guy started to actually take all that crazy rhetoric seriously. And if “traitors” really are attempting to “exterminate” your people via a deliberate policy of “genocide”, well, shooting as many of them as you can isn’t really so unreasonable, is it? As near as I can tell, since the attacks half the chatter on those websites has been “we really, really didn’t mean it!!” while the other half has been “great job, Oslo guy!”

Now Norway’s on the other side of the world, and there was also an extremely strong Israel/Zionist angle, so the story doesn’t seem have legs in the American MSM. But perhaps people should consider that vast numbers of American “activists” read those same “excitable” websites. And if some crazy American guy did the same thing, and massacred a whole campful of Young Democrats because of the all the crazy “traitor—extermination—genocide” rhetoric he’d been reading, well, I suspect that *extremely* bad things would immediately happen to an awful lot of loudmouth bloggers, some of whom probably deserve it and some of whom probably don’t. And the MSM barrage would probably ensure that 95% of the public supported doing all those extremely bad things, just like the mass roundups of Muslims after 9/11.

Endlessly shouting “traitor!”—“extermination!”—“genocide!” at your political opponents has always struck me as being pretty ridiculous, and perhaps now pretty clearly unwise as well.

Jews know better than anyone else how well shouting “genocide!” works. Since WWII they have thrust their holocaust narrative to the very center of Western consciousness – sanctifying themselves while demonizing Whites.

16 thoughts on “Ron Unz is Anti-White”