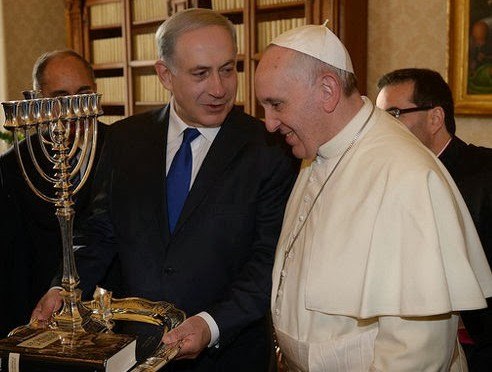 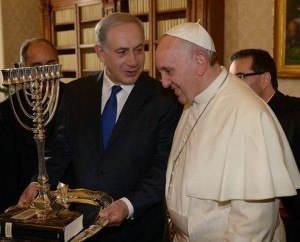 Understanding the book’s unique argument enables us to understand why Netanyahu chose to give such an ostensibly undiplomatic gift to the Pope. The Times recounts:

As a historian, Mr. Netanyahu reinterpreted the Inquisition in “The Origins of the Inquisition in Fifteenth Century Spain” (1995). The predominant view had been that Jews were persecuted for secretly practicing their religion after pretending to convert to Roman Catholicism. Mr. Netanyahu, in 1,384 pages, offered evidence that most Jews in Spain had willingly become Catholics and were enthusiastic about their new religion.

Jews were persecuted, he concluded — many of them burned at the stake — for being perceived as an evil race rather than for anything they believed or had done. Jealousy over Jews’ success in the economy and at the royal court only fueled the oppression, he wrote. The book traced what he called “Jew hatred” to ancient Egypt, long before Christianity.

In other words, Ben Zion Netanyahu’s argument shifted the root blame for the Inquisition from religion to ingrained racial animus–from the spiritual to the secular. If one was going to give the pope a book about the Inquisition, then, this would be the one. Moreover, not only does the book’s revisionist reckoning partially absolve Christianity for Spanish persecution of the Jews, it offers a contemporary message of pressing relevance. At a time when Christian anti-Semitism has receded–evidenced not least by the friendly relations between the Vatican and the state of Israel–secular and racial forms of anti-Semitism have been on the rise, particularly in Europe, where a nearly a quarter of Jews say they are afraid to publicly identify as Jewish. The anti-Semitism diagnosed by Ben Zion Netanyahu is alive and well.

In other words, the diagnosis of the jews is that racial animus comes entirely from the goyim. This “unique argument” is the same double-talk that Douglas Rushkoff spews.

In trying to shift the root blame away from their parasitism, and particularly to their White hosts, jews try to have it both ways on race. They insist race doesn’t exist and the jews aren’t biologically distinct. Yet by invoking racial animus to explain “anti-semitism” they are implicitly acknowledging the reality of race and their biological distinctiveness.

Setting aside the self-serving jewish double-talk, “anti-semitism” is best understood as anti-parasitism. It has been the historic reaction of a variety of hosts to jewish infiltration, manipulation and exploitation.

9 thoughts on ““Anti-Semitism” as Racial Animus”