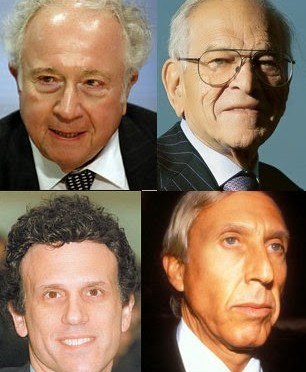 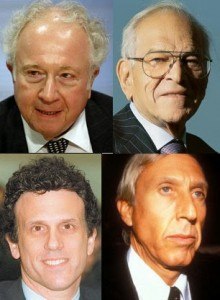 In PBS: The “Greed Is Good” 1980s as a war on anti-Semitism Steve Sailer waxes sarcastic over the narrative recounted in The Lucky Sperm Club: Jews, M&A and the Unlocking of Corporate America – “the inside story of the development of the mergers and acquisitions movement in the 1980s — a phenomenon that has ruled global commerce ever since”.

Back in the 1980s when I believed everything I read on the Wall Street Journal op-ed page, the junk bond mergers & acquisition boom was often justified as a war on anti-Semitism in American business life. Eventually, after Ivan Boesky and Mike Milken went to jail and junk bonds contributed to the early 1990s recession, you stopped hearing that interpretation quite so much, but it’s still out there. Certainly, nobody is much interested in debunking it.

From PBS.org, here’s a preview of a new book that revives the argument that the 1980s leveraged buyout bubble was payback for discrimination against Jews. It’s by John Weir Close and is called A Giant Cow-Tipping by Savages: The Boom, Bust, and Boom Culture of M&A

Close, the author, provides the jewish version of how the mergers and acquisitions culture started:

M&A was driven by two Jews, Marty Lipton and Joe Flom, who had simultaneous epiphanies about how to take advantage of new government regulation

America was still an agglomeration of ghettos: Italians knew Italians, Jews knew Jews, Poles knew Poles, Irish knew Irish, WASPs barely knew any of them existed and the Cabots spoke only to God.

“When I came to New York in the ’70s, the WASP aristocracy still reigned,” the Lucky Sperm Club’s Shapiro recalls. “You didn’t see an Asian face above Canal Street. You didn’t see a black face in a law firm unless it was the mailroom. You certainly didn’t see an Hispanic face. Swarthy Italians and Jews? They were not people you dealt with.”

As recently as the 1970s, Jews and all others not of the white Anglo-Saxon Protestant ascendancy were still excluded from any position of real power at the bar, on the bench, at banks and in boardrooms.

Yet again, as happened so often in their history, the Jews somehow found their own methods to carry them past such barriers, and once those blockades were destroyed, other demographics followed.

But it was primarily Jews who first became expert in taking over companies against the will of their existing executives. The white-shoe law firms and elite investment banks found this simultaneously distasteful and tantalizing in the same way medieval merchants viewed the lending of money at interest. Both groups were discouraged from joining in one of the most profitable enterprises of their day: the old merchants by, among other things, an ecclesiastical ban on the practice of usury; the new lawyers, by the establishment’s social codes of behavior. Again, the Jews found themselves in control of an industry that then perpetuated the stereotype: the omnipotent, venal Machiavellian, hands sullied by the unsavory. But the business of takeovers paid the rent. And then some.

This is the jewish narrative. Jews oppressed by Whites. Who forced them into finance! Then the jews prevailed and turned their narrative into a template for other “minorities” – neutralize the White oppressors so everyone can pay their rent (to the jews, of course).

Sailer notes that it was Ivan Boesky and Michael Milken, two more jews, who invented the “junk bond” fraud that helped finance their takeovers of corporate ownership. I wonder who the jews were who actually started it all by lobbying for and writing the government “regulations” all these other jews took advantage of.

At any rate, it was only the prosecution of Boesky and Milken in the 1990s which broke through into mainstream consciousness. The jew-dominated media was busy spinning the whole affair not as an ethnic war, but as an internecine corporate struggle, a hopelessly complex story best reduced to a parable about the excesses of greed. One clear indication that it was in fact part of an ethnic war came when Milken retained professional hyper-jew Alan Dershowitz for his legal defense. Throwing off the cloak and doubling down on the jewish privilege and aggression which had characterized the raiding all along, Dershowitz immediately went on the offensive. Aiming not so much at the courtroom as at the court of public opinion, Dershowitz leveraged the jew-dominated media to finger “anti-semitism” as the source of all the trouble.

Any perception that Dershowitz lost his battles – whether to keep Milken out of prison or to transfer blame for jewish malfeasance to “anti-semitism” – is wrong. Milken was sentenced to just 10 years in prison for the incalculable damage he had wrought. He served only 22 months. Purportedly disgraced, Milken remains rich and famous. He continues to advertise himself as a financier. At the time, the culprits were described in disapproving but deracinated terms, like “Den of Thieves“, and jews like Dershowitz howled that this was an example of jews being wronged. Today jewish power is even greater and more overt, so now the story is that jews were waging war because they had been wronged.

In fact, by the 1980s the jews had been waging an unrequited war for decades. Sailer points out that the “battle for Revlon was written about endlessly in the 1980s as a struggle between the dying WASP past and the new money meritocracy” even though the raider (Ron Perelman) and raidee (Charles Revson) were both jews.

This is no surprise to students of the jew. Henry Ford’s The International Jew well documented the distasteful qualities and startling extent of jewish power as of the early 1920s, before their hegemony was complete. The jews used the same playbook in the 1920s and 1980s as they do today. First they pillory the goyim for imagining jews are pillaging them. Then they pillory the goyim for making the jews pillage them. Pillory and pillage, pillage and pillory. Even when it’s nothing more than jews fighting jews over who gets to pillage the goyim, their age-old canard is that they’re fighting the discrimination and intolerance of an omnipotent “anti-semitic” conspiracy.

Sailer concludes with a lame plea of ignorance:

I don’t really know why the Revlon takeover of 1985 was seen in the media as such a milestone of Jews overcoming WASP discrimination. It just was.

In summary, the Revlon takeover as a plucky triumph over anti-Semitism is a good example of how malleable accounts of one’s people’s past oppression can become for the purpose of justifying dubious dealings in the present.

The corporate raiding was but a mopping up operation, a battle that could take place only because other political and social battles had been fought and won in prior decades. It was the jews’ overwhelming financial and media power, and partial control over business, which made mopping up on the corporate front possible. They prevailed mainly by default. Their whining about “WASPs” notwithstanding, in the US the jews have never faced any comparable opponent as aware, cohesive or ruthless, who clearly saw themselves at war and with whom.

The dominance of the jewish narrative today is an indication of jewish dominance not only over media, finanace and business, but over the very thoughts of non-jews. Yet the jewish narrative doesn’t spring from jewish dominance. Just the opposite. It is only an uncompromising belief in their righteousness, in the moral legitimacy of their cause, through which any people have any prospect of prevailing in the long term.

Armed with such beliefs the jews have, time and again, cultivated the opposite in their hosts – unawareness and disorganization – and thus prevailed. The very first step to combat jewish parasitism is recognize it as such. Jewish lies are not harmless, but are more properly regarded as the acts of a hostile adversary, an essential element of their stealthy struggle to attain and maintain dominance.

5 thoughts on “Junk Bonds and Corporate Raiding as Ethnic Warfare”