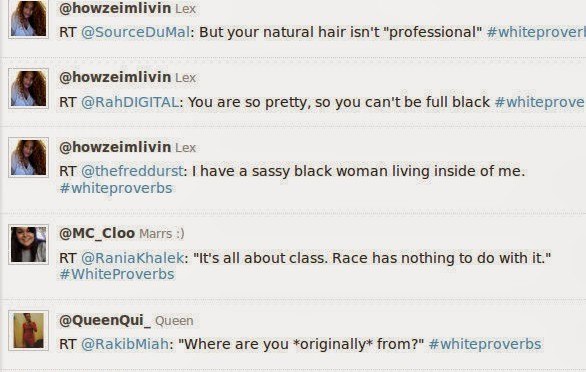 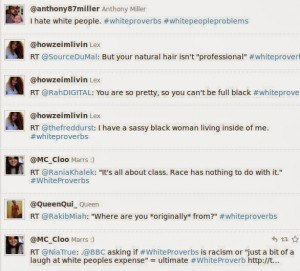 In White proverbs the BBC notes that anti-Whiteness is trending, though they try to spin it as something fun and innovative. Don’t hold your breath waiting for anti-“racist” groups to sue Twitter over this. They defend jews, not Whites.

The fact is that the Twitter hashtag #WhiteProverbs is just another manifestation of a peculiar form of complaining which has taken several other names in the past few years – “First World Problems”, “White Problems”, “White Whine”, and “Microaggressions”. The consistent mislabeling of these trendy expressions reflects their dishonest nature. Names like “#AntiWhiteProverbs”, “Anti-White Problems”, “Anti-White Whine”, or “Micropassiveaggressions” would more accurately convey what’s really going on.

The attached screenshot and 21 Racial Microaggressions You Hear On A Daily Basis capture the core themes. The grievances come entirely from non-Whites ostensibly incensed by a naive, deracinated White unconsciously trampling on some aspect of their fragile non-White self-image. More than half of the whining boils down to self-criticism couched as an insult. The non-Whites seem most unhappy and insecure about their hair, their looks in general, their alien name/food/customs, or their language troubles. And they blame it all on Whites.

In their minds the worst offense of all is when Whites say that race doesn’t matter. As the execrable Bill Maher puts it, denying “racism” is the new “racism”. It’s not that any of these anti-White assholes want Whites to wake up and have our own racial consciousness. What they want is for us to learn and cater to all the little nuances of their identities.

Whites thinking that race doesn’t matter definitely is a big problem – for Whites. Instead of doing what non-Whites want, Whites should be thinking about what’s best for Whites.

12 thoughts on “Anti-Whiteness is Trending”