Some twits and a press release this week claimed Jared Taylor’s lawyers had “won the first round” against Twitter. Reading the court transcript there are a few more realistic things to say about it.

First, hearings like this are by design biased in the plaintiff’s favor. Twitter doesn’t want to go to trial, so they’re trying to convince the judge that Taylor’s claims are baseless. The judge argued in this instance almost as if he were an advocate for Taylor. He favors a trial, but intimated several times that his attitude during a trial would be different.

Second, no surprise, Taylor’s complaint does not focus on race. He is not challenging Twitter’s anti-White censorship, much less highlighting the central role organized jewry has played in driving that agenda. Instead the focus of the complaint is on “viewpoint discrimination” and whether Twitter falsely led users to believe they really allow “all types of speech”. The judge sees it as a public interest lawsuit. Twitter’s lawyer argued that Taylor brought the suit to serve the narrower interests of himself and his non-profit organization. As he put it:

this is a suit about these two plaintiffs with an enormous public stake in this case; they say that their whole enterprise of spewing… white — you know, white racism to the world depends on Twitter; that they built their enterprise around this.

Finally, in comments like this one and the ones below Twitter’s lawyer made it clear that Twitter does indeed engage in anti-White censorship and asserted that they have the legal right to do so. While trying to excuse Twitter’s not-so-free speech fraud the lawyer said:

The lawyer admits that Twitter banned Taylor because of race. He takes it for granted they are justified to ban Whites merely for being White, at least as long as they tack on the semitic buzzterms “racist” or “supremacist”. This is the heart of the issue, despite Taylor’s attempt to avoid it.

Twitter locked my account today. To unlock it I had to provide a phone number and delete some twits. 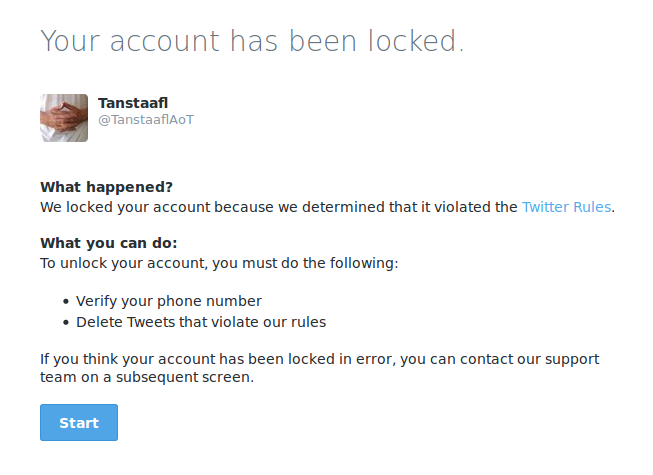 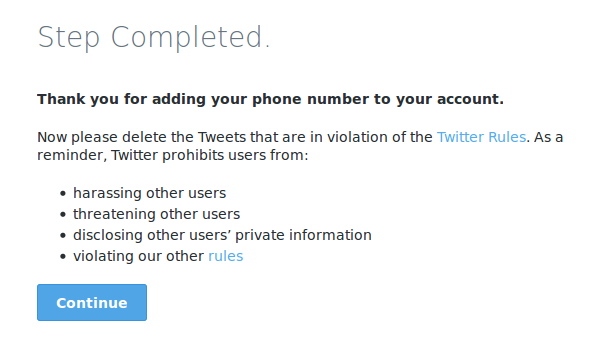 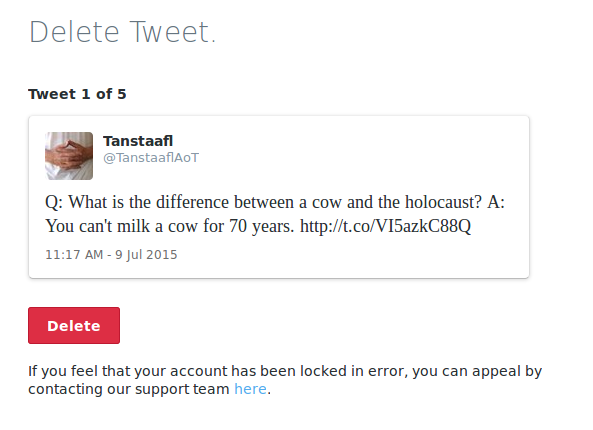 The image that was attached to that twit came from jewsmedia accounts of the jews’ big hoax celebration: 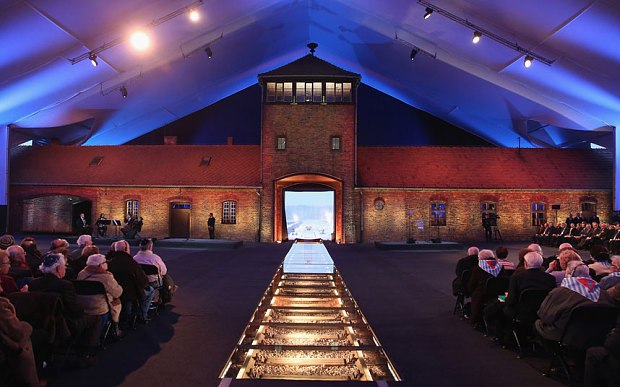 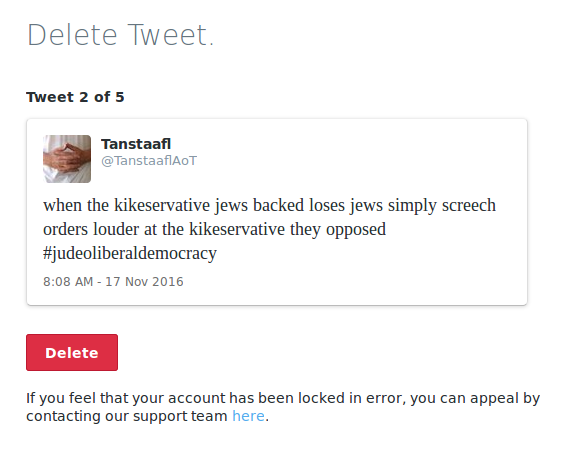 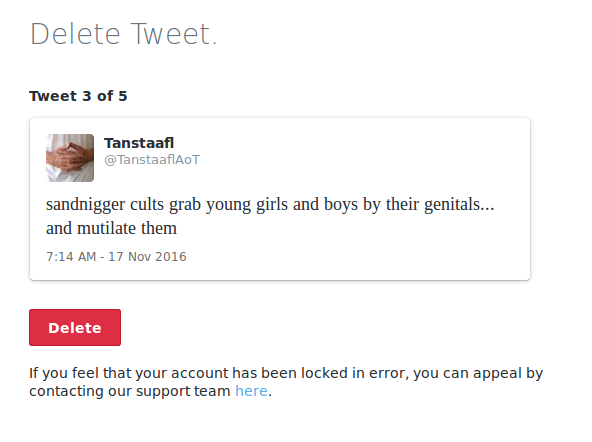 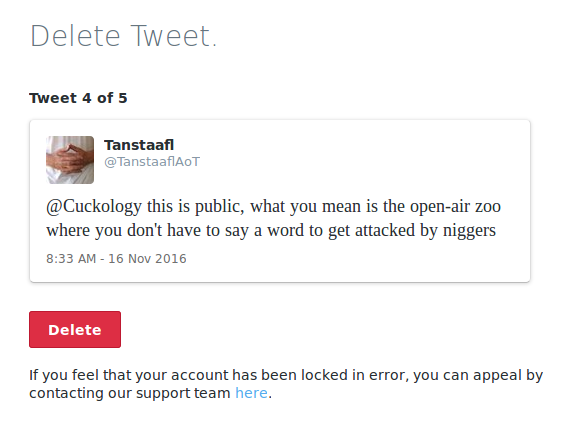 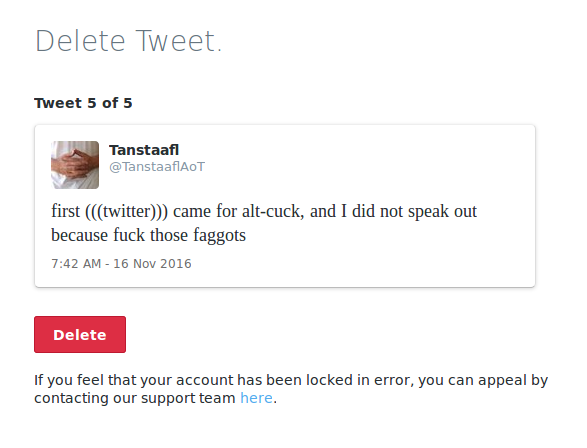 UPDATE 18 Nov 2016: Locked again. The one targeted twit was posted before the first lockout: 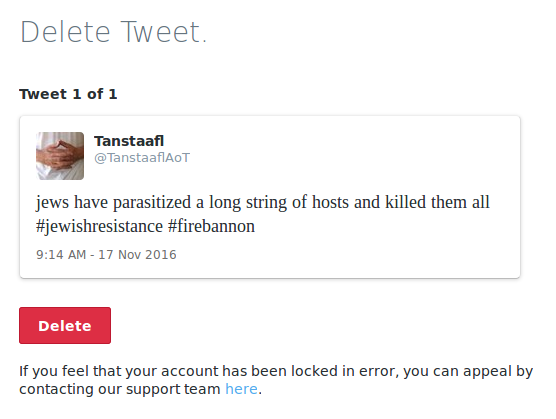 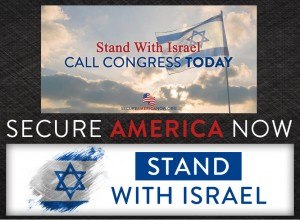 The twits at Secure America Now are pumping out judeo-con double-talk: America must support Israel defending itself!

Success: FAA ban on Israel gone. Thank you to all who showed your support!

Tell Congress that you support Israel’s right to defend itself against Hamas! Call NOW: http://t.co/cHrWMSoRX2 pic.twitter.com/Wpu9jhgo3I

Israel has a right to defend itself against Hamas terrorists. Sign the petition & stand with Israel! https://t.co/V5QSSV0V2o

We cannot idly watch Pres Obama and John Kerry abandon our only friend in the Middle East: we must stand with Israel! http://t.co/8KOJGtWYhp

We must stop Iran's nuclear development program. Join us and sign the petition now: http://t.co/0k8pgzDFDa

Secure America Now (SAN) is a hawkish advocacy group founded in 2011 by pollsters John McLaughlin and Pat Caddell. The group produces political ads and policy analyses in an effort to “inject national security issues into the public dialogue.”[1] A high-profile “member” of the group is Devon Cross, a longstanding neoconservative activist who has supported a number of militarist advocacy initiatives, including the Project for the New American Century.[2]

Secure America Now has been criticized for attempting to mask a right-wing, “pro-Israel” agenda with misleading claims about bipartisanship. For instance, in a report about a poll it released in July 2011 that purported to demonstrate that Jewish Americans were abandoning the Democratic Party, the Washington Post’s Plum Line reported, “Republicans are touting yet another poll that purports to predict the end of the Jewish allegiance to the Democratic Party. Citing a new poll by Republican John McLaughlin and Pat Caddell, the GOP’s favorite ‘Democrat,’ they have convinced themselves that this time, Obama really is in trouble among Jewish voters.”

The pro-Israel agenda is bipartisan. “Left-wing” organizations ordinarily mask it. What makes SAN “right-wing” is that it doesn’t. SAN also makes no attempt to explain how “standing with Israel” helps “Secure America Now”. To do so would mean acknowledging that 1) the jews run America, 2) they care far more about Israel than America, and 3) SAN exhortations to “stand with Israel” and “stop Iran” are about signaling a willingness to serve the jews, not Americans.

Predictably, such obsequiousness amuses the jews.

Sometimes a picture is worth a thousand words, but this one, which captures one of the major themes of the hostile reaction to the White Man March, reduces to just two – anti-White whine. However, with just a little work I thought it could help prove a point:

Sure enough, I touched a nerve:

Hate mongering fuckery like this, tho, I mind. #ReportasSpam https://t.co/J0ZZxvmGdg

Brian Stuart describes itself as a dangerous fat activist, humorless feminist and pedantic liberal. He has produced a series of similar cartoons, all crying out for noses.

If anything illustrates the jewish origin of the anti-White zeitgeist, it’s right here. As anyone can see, all it takes to turn humor into hate is to mistake jews for Whites.