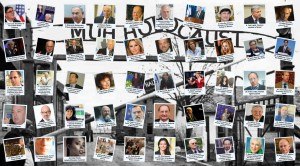 The point of putting together such a list is to recognize the achievements of our tribe across the world, people who in one way or another have worked tirelessly for the improvement of humanity and, in doing so, have made their mark on history.

Included in the overview article are links to separate pages with detailed descriptions for each jew in the list. The word power occurs almost as frequently as influence, especially for those at the top. These are jews who have definitely worked tirelessly and made their mark on history. However, the suggestion that they have used their power and influence “for the improvement of humanity” is ridiculous, unless you understand “humanity” to mean “jewry”.

Most of the jews in the list are Israelis, and most of them are government officials. Many of the rest head organizations in the Anglosphere which are dedicated to promoting jewish and Israeli interests. More than anything else this is a list of jew-first and Israel-first chauvinists. From the point of view of anyone whose interests are harmed by jewish power and influence this can therefore be regarded as a list of some of the worst jews.

Before the creation of the Jewish state, in the throes of rampant anti-Semitism and horrors of the Holocaust, it would have been unthinkable to put together such a list. But today, thanks in great part to the strength and stature of Israel and the unprecedented freedom that Jews enjoy in the United States and elsewhere, there has been a Jewish renaissance.

Rising anti-Semitism in Europe is a worrying trend, and it is especially important that prominent Jews with influence in Europe are supported in their struggle against this phenomenon.

Jewish power and influence now runs rampant over the rest of humanity. Denial and shifting blame is becoming less and less tenable. Beside serving as an expression of naked triumphalism, or as an Orwellian attempt to turn jewish rule into something their subjects should celebrate, lists like this represent in effect a burning of the boats, prodding the most prominent jews who aren’t already fully committed to use their power and influence to squash any pushback.

Have we left important people off the list? Of course.