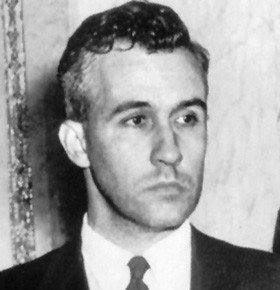 Rusty’s comment provides another view of liberalism, as rebellion against natural law:

The more degenerate our society becomes, the more it seems to me that liberalism and sin are practically the same thing. The fountain of both are the same: the belief that one can break the rules of the universe and of God(s) and not have to face any consequences. All other errors (sins) follow from this basic rebellious notion.

Yockey was likely troubled by the idea of disjunctive subracial (e.g., Nordic/Alpine/Mediterranean) European subdivisions that considered these putative subraces as almost different species (with implications of superiority/inferiority). As a promoter of European unity, Yockey eagerly latched on to absurd Boasian counter-theories to invalidate what he saw as invidious and divisive distinctions among Europeans.

Yockey’s thoughts on both points can be found in Imperium, p.152. Here Yockey sets the stage for his assessment of liberalism by describing the definitive role of the “friend-enemy disjunction” for political organisms:

The Laws of Totality and Sovereignty

First the Law of Totality: Any contrast, opposition, or hostility whatever existing within groups among the organism may become political in its nature, if it reaches the point where a group or a unit feels another group, class or stratum to be a real enemy. For such a unit to arise within an organism is for

the possibility of civil war to be present, or a severe crisis in the organism, which renders the organism liable to damage or extinction from without. Therefore, every organism, by its very existence, has the characteristic that it assumes power over the determination of all issues. This does not mean that it plans the total life of the population — economic, social, religious, educational, legal, technical, recreational. It means merely that all of these things are subject to political determination. Many of these things are neutral to some States, but objects of interest to others. But all organisms will intervene when an inner grouping may possibly become a focus of a friend-enemy disjunction. This describes all political units whatever, entirely independently of how they formulate their written constitutions, if they have any.

The Law of Totality affects individuals by embracing them existentially in the life of the organism. Politics places the life of every man within the political unit in the balance. It demands, by its very existence, the readiness of all individuals in the service of its fulfillment to risk their lives. Other groups may demand dues, periodical attendance at meetings, investment of time in group projects. If they demand however — so fundamental is this organic law of totality — that the member plight his life to the group, they become therewith political. The French public law professor Haurion designated it as the hall-mark of a political unit that it embraced the individual entirely, whereas non-political groups embrace him only partially.

This is the Law of Totality in other words. It is thus a touchstone of a group for this purpose whether it demands an existential oath.

If a group extracts such an oath from members, the group is political. This Law of Totality, it is hardly necessary to add, is

not at all derived from conscription for military service. Conscription exists only for a few centuries within a High Culture, whereas the Law of Totality describes the Culture itself when it is itself constituted as a political organism, and, during the period of concentration of politics in Culture-States, it describes every individual State. Like all organic laws it is existential: if any inner force can challenge it, the organism is sick; if the challenge is attended with success, the organism is in severe crisis and may be annihilated. In any case, its unity will be temporarily in abeyance, with the possibility of partitioning by outer powers.

The Law of Sovereignty is the inner necessity of organic existence which places the decision in every important juncture with the organism, as opposed to allowing any group within to make the decision. An important juncture is any one which affects the organism as a whole, its steering in the world, its choice of allies and enemies, the decision of war and peace, its inner peace, its unchallenged inner right to decide controversies. If any of these can be called into question, it is a sign that the organism is sick. In the healthy organism, this sovereignty is absolutely undisputed, and may continue so for centuries. But a new age with new interests may raise contrasts which the rulers do not grasp; they may blunder, and find themselves on the defensive in a civil war. The challenge of the sovereignty of the organism was the first symptom of crisis. If the organism survives the crisis, the new rulers of the same organism will be the focus of the same sovereignty.

An important fact has been touched upon with this: it is not the rulers who are sovereign within the meaning of this law. Their powers in fact are derived from their symbolic-representative position. If a stratum represents and acts in the Spirit of the Age, revolution against it is impossible. An organism true to itself cannot be sick or in crisis.

The Law of Sovereignty does not mean that every aspect of group life within the organism is dominated at all times by the political, nor that everything is organized, or that a centralized system of government necessarily reaches out always and destroys every organization of whatever kind. The outlook developed here is purely factual, and the Law of Sovereignty describes all political organisms; it is a formulation in words of a quintessential characteristic of a political organism.

Yockey’s laws are existential. Political organisms which violate The Law of Totality, through division, die. Those which violate the Law of Sovereignty, by loss of self-consciousness and self-rule, also die.

Yockey’s view, almost seventy years on, remains relevant. Though the Spirit of the Age, the zeitgeist, the “philosophy of society”, continues to mutate, it is still called “liberalism”. The rule of an implacably hostile, judaized elite and their multicultural/multiracial divide-and-conquer ideals flout both of Yockey’s laws. The prognosis for the political organisms which embrace such “liberalism” is increasingly obvious – sickness and death.

With this groundwork laid, we move now to Yockey’s analysis of the origins and traits of what he called liberalism. Skipping ahead to p.204, he identifies the key false premise as a misunderstanding of human nature:

The touchstone of any political theory whatever is its attitude to the fundamental ethical quality of human nature. From this standpoint there are only two kinds: those which posit a “naturally good” human nature, and those which see human nature as it is on the other hand. Good has meant reasonable, perfectible, peaceful, educable, desiring to improve, and various other things.

Every Rationalistic political or State theory regards man as “good” by nature. The Encyclopedists, the Illuminati and the devotees of Baron Holbach’s philosophy were all symptomatic of the advent of Rationalism in the 18th century. All talked of “the essential goodness of human nature.” Rousseau was the most forceful and radical of 18th century writers in this respect. Voltaire set himself apart by denying totally this essential goodness of human nature.

It is curious that a theory of politics could ever possibly ground itself on such an assumption, since politics actualizes itself only in the form of the friend-enemy disjunction. Thus a

theory of hostility assumes that human nature is essentially peaceable and non-hostile.

The middle of the 18th century is the beginning of the word liberalism, and of the idea-complex liberalism. Since human nature is basically good, there is no need to be strict with it, one can be “liberal.” This idea was derived from the English Sensualist philosophers. The Social Contract theory of Rousseau originated with the Englishman Locke in the previous century. All Liberalism predicates a sensualistic, materialistic philosophy. Such philosophies are rationalistic in tendency, and Liberalism is simply one variety of politically applied rationalism.

The delusion that human nature is basically good fuels the “liberal” drive for freedom and equality. Taken to its usual universalist extreme, it also fits the view of “liberalism” as the delusion that everybody is “us”. “Liberals” don’t need to take their own side because they see only one side, the side they imagine everyone (except White “racists”) is already on.

5 thoughts on “Yockey on Liberalism – Part 2”