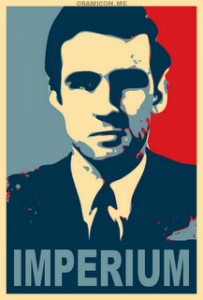 Revilo Oliver wrote The Shadow of Empire: Francis Parker Yockey After Twenty Years in June of 1966. Oliver regarded “the great problem of history” to be whether “cataclysmic changes [e.g. the British conquest of India and subsequent withdrawal] are wrought by the weakness and folly of men or by blind and ineluctable forces of nature”. Oliver noted:

The great modern philosopher of history is, of course, Oswald Spengler, whose Decline of the West formulated the problem in terms so clear and universal that everything written on the subject since 1918 has perforce had to be a commentary on Spengler — an attempt to extend, modify, or refute his magisterial synthesis.

Oliver described the connection between Spengler’s work and Yockey’s:

This is not a book for “liberal intellectuals” or other children. No man can study history until he has learned that he must study it objectively and dispassionately, without reference to his emotions or predilections.. Whether you view Caesar with admiration or horror, whether you love or hate him, has nothing whatever to do with the fact that he was victorious at Pharsalus.

No man should consider problems in historionomy if he does not realize that the only question before him will be the accuracy of the diagnosis or prognosis. The validity of the analysis does not in the least depend on the reader’s emotional reaction to the future that it portends. When a physician diagnoses diabetes or arteriosclerosis or cancer, the only question is whether he has observed the symptoms accurately and reasoned from them correctly. Our wish that the patient did not have the disease is utterly irrelevant.

Infantile minds, accustomed to living almost entirely in the vaporous realm of their own imagination, are incapable of distinguishing between reality and their own fancies. That is why I counsel “liberal intellectuals” not to read Imperium. If they are able to understand it, the book will certainly send them into a tantrum and may induce a paroxysmic fit. They had better stay in their academic lecture-halls or other play-pens, where they can be happy making mud-pies, which they can call “world peace” and about which they can dance in a circle, chanting

Higgledy-piggledy, my fat hen,
Now we’ve got a big U.N.

I also hope that Imperium will not fall into the hands of tenderhearted Conservatives who want to Love Everybody. Those dear ladies have noble souls, but they are much too good for this world.

Oliver also expressed some concerns about Spengler, Yockey and Imperium:

Spengler assumed such plasticity of human nature that he greatly underestimated and almost ignored the biological differences between human beings. Spengler was deceived by the pseudo-scientific data forged or distorted by the school of Franz Boas

Spengler cites Boas with unjustified respect, and Yockey follows Spengler, though with some prudent reservations. Both try to refute genetics by citing examples of apparently total cultural assimilation; they do not see that these could be explained by phenomena they recognize elsewhere: the cultural passivity of the majority in all nations and cultures, and the tendency of isolated individuals to adapt themselves to the society in which they find themselves. It is true that Orientals in the West have conformed, with apparent eagerness and sincerity, to Occidental culture; it is also true that white men have “gone native” among the American Indians and Polynesians. The one example proves no more than the other.

Spengler virtually ignores race as a biological reality and even uses the word “race” in a non-biological sense to designate full participation in a culture.

See my previous work on race and anthropology and race and fraud for more information about Franz Boas and how the jewish intellectual movement known as Boasian anthropology derailed race science.

For Yockey, the question is less critical than for Spengler. Yockey is concerned primarily with showing that “race-differences between White men, which means Western men, is vanishingiy small” in comparison with the gulfs that separate Western men from Negroes and Orientals. That, no one can deny.

Imperium contains a number of historical oversights and lapses, such as are inevitable when a man tries to generalize from a vast mass of complex details — inevitable even when the author writes in a well-stocked library after decades of intensive study and meditation. Yockey, it must be remembered, was a young man of thirty-one, by profession a lawyer, who wrote in a room of an isolated inn on the lonely shore of the Irish Sea north of St. George’s Channel — wrote from memory in a fire of inspiration and while still feeling the moral revulsion caused, by his participation in the early stages of the obscene farce that was enacted at Nuremberg to provide a hypocritical pretext for the lynchings that the United States carried out as a pawn of the International Communist Conspiracy. I shall merely list the three most conspicuous historical errors.

In Oliver’s estimation Yockey did not fully grasp the long-term, biological nature of the jewish problem:

(3) When Yockey concluded that the Jewish “race” (in his non-biological sense of the word) was formed by the ghettoes of Mediaeval Europe, he probably did not know that the historical record extends over twenty-five centuries. There is no reason to suppose that the Jews who migrated to the Mediaeval cities and established their ghettoes aroused more resentment among the Christian populations than the Jews who settled on an island in the Nile near the First Cataract aroused among the native Egyptian population in the fifth century B.C. Yockey’s mistake, by the way, vitiates the parallel that he draws between the Jews in Europe and the Parsees in India.

Such errors of detail do not invalidate the general thesis of Imperium. Yockey’s analysis of the forces that are eroding our civilization is significantly supported by the fact that Lawrence R. Brown, who wrote when Imperium was almost unprocurable and seems never to have heard of it, reached substantially the same conclusions by an entirely different method in his learned and lucid work, The Might of the West (New York, Obolensky, 1963). And in several distinct areas, the future that Yockey forecast in 1947 seems to be taking shape before our eyes today. Imperium is not a revelation of an ineluctable future, but it is a work that we must study and ponder, if we would act intelligently in our time.

Even so, Oliver still saw value in Yockey’s work:

The great value of Imperium is that it forces us to reconsider our position realistically.

The liberalism Yockey critiques seems quite distinct from what I have so far discussed in What is Liberalism?, Liberalism as a Death Wish and Liberalism as a Suicide Pact. Yockey’s view of liberalism seems similar to Guessedworker’s view, in that both regard liberalism as an irrepressible expression of European man. Next time we’ll compare Yockey’s points with the broader philosophy-of-society liberalism we have previously explored.

Many of Yockey’s ideas on biological race specifically, and on science and scientific topics generally, are not only ludicrous but just plain wrong. Objectively wrong. With respect to race, I suspect that the views of Yockey (and Evola as well) were negatively influenced by some of the racial theories popular before WWII, and still extant today, particularly in the American “movement.” In other words, I don’t think Yockey had any problem with the major racial (e.g., European/African/Asian) distinctions; instead, Yockey was likely troubled by the idea of disjunctive subracial (e.g., Nordic/Alpine/Mediterranean) European subdivisions that considered these putative subraces as almost different species (with implications of superiority/inferiority). As a promoter of European unity, Yockey eagerly latched on to absurd Boasian counter-theories to invalidate what he saw as invidious and divisive distinctions among Europeans.

You can find more information about Francis Parker Yockey and Imperium at Metapedia.

3 thoughts on “Yockey on Liberalism – Part 1”