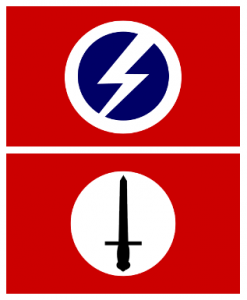 An article by Anthony Gannon, who knew and worked with Yockey, appeared at Counter-Currents recently. Francis Parker Yockey, 1917–1960:

This pen-name was symbolic of the extremities of Europe as seen by Yockey; Ulick was an Irish name indicating the western boundary, whilst the Varange were nomadic tribesmen operating on the eastern fringes of Europe.

I will say no more on the disjunction between Yockey and Sir Oswald, as there is nothing constructive to be gained from raking over old ashes. Indeed, it is true that Yockey was disappointed that neither he, nor Imperium, found favor with the remnants of pre-War British fascism in general. He attracted the bitter and stupid hostility of Arnold Leese, the leader of the former Imperial Fascist League, along with his latter-day disciples such as A. F. X. Barron and company, The Britons, and sundry others of like mind. Of course, all of these groupings were equally opposed to Sir Oswald Mosley and his ideas — so there was no organized common front, per se, against Yockey; he was just someone else to hate. His sin in their eyes was to reject vertical race, rooted in 19th-century materialistic thinking, and to put in its place the 20th-century system of horizontal race — spiritual race. However, it is true beyond doubt that the main reason why so many of those who could have been expected to support Yockey’s ideas, did not do so for another reason — jealousy; jealousy of his intellect and ability. In every intellectual exchange between Yockey and others which I ever witnessed, Yockey always emerged the winner, and almost all of the losers never forgave him for this.

In almost every case, such people were visibly impressed by his intellect and power of expression and, certainly, they had never met anyone like him before. He was a talented pianist who could play the works of Chopin and Liszt in concert hall style, and with a fire and expression that was remarkable. Ladies liked Yockey, and he liked the ladies; they felt his magnetism and intensity and responded readily to both. Some of the people we met were German born, and with them Yockey would converse in German, without difficulty, most of them congratulating him on his grasp of the language and on his accent.

In spite of first impressions, if Yockey met some people frequently and for long periods, there was always the chance of a quarrel. He did not suffer fools gladly, and could become quite insulting and contemptuous to those he believed were being unduly obstinate or slow in conceding a point in dispute.

Oswald Mosley was the subject of a special program at the White network in July 2013. After WWII Mosley’s main theme was “Europe A Nation”. In 1948 he formed the Union Movement, whose political position is classified by Metapedia as National Europeanism and European Socialism:

In 1949 Yockey, Gannon and others who had split from Union Movement formed European Liberation Front, whose political position is classified by Metapedia as Social nationalism, European nationalism, Third Positionism.

The pan-European visions of Mosley, Yockey and others were holistic, rooted in a desire to promote the vitality and common interests of Europeans and European culture. In contrast, the European Economic Community (established in 1958) and European Union (established in 1993) effectively hijacked what Yockey called the Idea and delivered a distorted version, a purely economic and legal union whose effects on the unique biology and culture of Europe have been increasingly obviously disastrous. Contemporary nationalists rightly see the EU as a fraud – far from an expression of common interests the EU presents a shared existential threat to all Europeans.

For more information on Arnold Leese listen to Voice of Albion w/ Paul Hickman 4-23-14 at Renegade Broadcasting. Paul reads from and comments on Leese’s autobiography Out of Step – Events in the lives of an Anti-Jewish Camel-Doctor.

We consider Yockey’s views on culture and race starting at page 245 of Imperium, in the section he titled “CULTURAL VITALISM” and subtitled “(A) Culture Health”:

‘I recognize only two nations, the Occident, and the Orient.”

“It is want of race, and nothing else, that makes intellectuals — philosophers, doctrinaires, Utopists — incapable of understanding the depth of this metaphysical hatred, which is the beat-difference of two currents of being manifested as an unbearable dissonance, a hatred that may become tragic for both.”

“I wanted to prepare the fusion of the great interests of Europe, as I had accomplished that of the parties. I concerned myself little with the passing rancor of the peoples, for I was sure that the results would lead them irresistibly back to me. Europe would in this way have become in truth a united nation, and every one would have been, no matter where he traveled, in the same Fatherland. This fusion will accomplish itself sooner or later through the pressure of the facts; the impulse has been given which, since my downfall and the disappearance of my system, will make the restoration of balance possible in Europe only by merger and fusion of the great nations.”

Napoleon’s west/east “national” dichotomy is a geographic/administrative subdivision which traces back to Rome. The nationalities of Europe can be similarly but more aptly characterized and subdivided ethno-linguistically into Germanic, Italic and Slavic, which all trace back to the Aryans.

Race scientists of the 19th and early 20th centuries understood Europeans as a subset of the Caucasian race, which they subdivided according to physical and mental characteristics into Nordic, Mediterranean and Alpine races which roughly overlap and correspond to the aforementioned linguistic subdivisions.

Such coarse groupings fit somewhere in the continuum between the relatively tighter notion of nation and looser notion of continental-scale race.

Yockey regarded spirit and soul as paramount and preeminent over biology/materialism. Thus his emphasis on “the Western Culture” and “the Western civilization” rather than the European people, which he subdivided into two parts according to spirit: the masses and a much less numerous culture-bearing stratum.

2 thoughts on “Yockey on Culture and Race – Part 1”