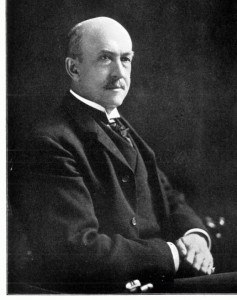 Upon reading the previous brief quotation of William Graham Sumner I was curious to learn more about him. His Wikipedia page begins:

William Graham Sumner (October 30, 1840 – April 12, 1910) was a Classic Liberal–now often called libertarian American academic. He taught social sciences at Yale, where he held the nation’s first professorship in sociology. He was one of the most influential teachers at Yale or any major schools. Sumner was a polymath with numerous books and essays on American history, economic history, political theory, sociology, and anthropology.

Sumner, like the other White polymaths of his time, has been retroactively branded a “social Darwinist”, which to the jews and other anti-Whites who have hijacked science roughly equates to “boogeyman”.

An example of the cognitive dissonance this hijacking has created can be found in this Slate article from 2012, Income Inequality: William Graham Sumner invented the GOP’s defense of the rich—in 1883:

One of the earliest (and most acerbic) champions of inequality was William Graham Sumner, a Yale sociologist and one of the best-known public intellectuals of the late 19th century. Sumner started his career as an Episcopal priest, tending to the pastoral needs of a New Jersey flock. Within a few years, however, he concluded that his temperament—famously standoffish and blunt—was better suited to scholarly endeavors. As a professor, he helped to pioneer the new discipline of sociology, coining such lasting terms as ethnocentrism and folkways in his studies of American culture. He also made a name for himself as a staunch anti-imperialist and principled opponent of the Spanish-American War.

Sumner was exactly the kind of proponent of “19th century thinking” that Francis Parker Yockey misidentified as the source of the problem with “the Western civilization”. (The real problem being the jews and other anti-Whites who hijacked the entire civilization, including race science.) Sumner was a White “liberal” who was objective, but not egalitarian. He was conscious of racial differences, and also aware that beyond the obvious physical traits these differences were also mental and cultural.

the technical name for the view of things in which one’s own group is the centre of everything, and all others are scaled and rated with reference to it

This is group consciousness and the morality based on it – my group, right or wrong, my group defines right and wrong.

The following is an indication that an ethnocentric jew is behind ethnocentrism.net:

The most extreme case of ethnocentrism, occuring since the time of William Graham Sumner, is that of the rise of Hitler and his hatred of Jews, gypsies and others.

Hitler was an individual, not an ethny. To the extent that the broad German support for national socialism, led by Hitler, had anything to do with the jews it was in reaction, in response to jewish ethnocentrism. The jews were an ethnocentric racial group which had risen to dominance over the native Germans via subterfuge, ethnic networking and financial fraud. They had infiltrated, manipulated and exploited the Germans, causing them harm.

The jews are the most extreme case of ethnocentrism. This is evident not only in their current power but their long history, their continuity over time relative to others. It is evident not only in their existing so long amongst others, but in thriving while doing so. So extreme is their ethnocentrism that they have been able to squelch criticism/discussion of their group, including their ethnocentrism. They have accomplished this in part by transferring the blame for the consequences of their parasitism onto their victims, the long string of hosts they’ve infiltrated, manipulated, and exploited, while ultimately driving them to ruin and extinction.

The situation has changed dramatically since Sumner’s day. Today jews pathologize and demonize “nazis”, by which they mean Whites generally, for being “racist”, by which they mean any hint of White ethnocentrism. Through relentless propaganda and indoctrination they have transformed the slightest sign of good and right and healthy ethnocentrism or racial consciousness, any awareness of White identity or concern for White interests, into something evil, wrong, and unhealthy. This is what they call “racism”.

You could say that by behaving this way, the jews demonstrate that they are the real “racists”. That would be wrong. The difference is that Whites are not ethnocentric enough, obsequious in the face of enemy criticism, whereas jews are beyond simple ethnocentrism, they aim not simply to quash what ethnocentrism Whites do have, but to turn it to their service.

The racial animus, the disdain, the hatred with which jews regard Whites is of its own kind. It deserves its own term. Alex Linder calls it loxism.

Considering his interest in ethnocentrism, did Sumner ever discuss the jews? How did he see them? In the process of searching for answers I came across Sumner’s most popular book, Folkways, published in 1907.

The book promotes a sociological or relativistic approach to moral behavior, as expressed in his thesis that “the mores can make anything right and prevent condemnation of anything.” (p. 521)

Encyclopedia Britannica describes the relation between folkways and mores:

Mores are more coercive than folkways: relatively mild disapproval follows an infringement of a folkway; severe disapproval or punishment follows the breaking of mores. Polygamy violates the mores of American society; failure to wait one’s turn in line is a breach of folkways.

Folkways is available online at The Gutenberg Project.

Sumner defines “mores” in the introduction:

I mean by it the popular usages and traditions, when they include a judgment that they are conducive to societal welfare, and when they exert a coercion on the individual to conform to them, although they are not coördinated by any authority

I have tried to treat all folkways, including those which are most opposite to our own, with truthfulness, but with dignity and due respect to our own conventions.

Sumner’s definition of ethnocentrism and its relation to folkways:

15. Ethnocentrism is the technical name for this view of things in which one’s own group is the center of everything, and all others are scaled and rated with reference to it. Folkways correspond to it to cover both the inner and the outer relation. Each group nourishes its own pride and vanity, boasts itself superior, exalts its own divinities, and looks with contempt on outsiders. Each group thinks its own folkways the only right ones, and if it observes that other groups have other folkways, these excite its scorn. Opprobrious epithets are derived from these differences. … For our present purpose the most important fact is that ethnocentrism leads a people to exaggerate and intensify everything in their own folkways which is peculiar and which differentiates them from others. It therefore strengthens the folkways.

He remarks on what could be called the universality of particularism:

17. When Caribs were asked whence they came, they answered, “We alone are people.”20 The meaning of the name Kiowa is “real or principal people.”21 The Lapps call themselves “men,” or “human beings.”

18. The Jews divided all mankind into themselves and Gentiles. They were the “chosen people.” The Greeks and Romans called all outsiders “barbarians.”

51. Class; race; group solidarity. … The concept of a race, as the term is now used, is that of a group clustered around a mean with respect to some characteristic, and great confusion in the use of the word “race” arises from the attempt to define races by their boundaries, when we really think of them by the mean or mode, e.g. as to skin color. The coherence, unity, and solidarity of a genetic group is a very striking fact.

Sumner also describes his understanding of group interests, patriotism, chauvinism, and further into the book discusses the origins of a variety of foundational societal attitudes on subjects such as slavery, abortion, cannibalism, sex, marriage, incest.

What you might call the spiritual side of race, Sumner called ethos:

76. The ethos or group character. All that has been said in this chapter about the folkways and the mores leads up to the idea of the group character which the Greeks called the ethos, that is, the totality of characteristic traits by which a group is individualized and differentiated from others.

Races have personality traits. And racial character is characteristic:

85. Persistency in spite of change of religion. … The Jews to this day show the persistency of ancient mores. Christianity was a new adjustment of both heathen and Jewish mores to a new religious system. The popular religion once more turned out to be a grand revival of demonism. The masses retained their mores with little change. The mores overruled the religion. Therefore Jewish Christians and heathen Christians remained distinguishable for centuries.

Sumner did indeed seem to understand the jews in racial terms. Elsewhere he referred to them as a nation. One sour note:

114. Antagonism between groups in respect to mores. … The real reason for the hatred of Jews by Christians has always been the strange and foreign mores of the former. When Jews conform to the mores of the people amongst whom they live prejudice and hatred are greatly diminished, and in time will probably disappear.

Sumner misjudged here, in two ways. First, he accepted the jewish point of view as his own. Second, jews express their distaste, alienation, even hatred for Whites more plainly than ever. It is Whites who must conform to the mores of the jews now, or suffer the consequences. The jews’ anti-“racism” is becoming more overt anti-Whitism, even as there are more non-Whites behaving far more ethnocentrically.

Overall Sumner’s attitude toward the jews comes across as neutral, viewing the jews as the older brothers of Christians, as the origin of and an influence on many mores later adopted or adapted by Christianized Europeans. He seemed to regard them as active in the past, and not so much in the present.

The following passage is the closest he came to criticizing contemporary jews, in Folkways at least:

116. Missions and antagonistic mores. … There is no such thing as “benevolent assimilation.” To one who knows the facts such a phrase sounds like flippant ignorance or a cruel jest. Even if one group is reduced to a small remnant in the midst of a great nation, assimilation of the residue does not follow. Black and white, in the United States, are now tending to more strict segregation. The remnants of our Indians partly retain Indian mores, partly adopt white mores. They languish in moral isolation and homelessness. They have no adjustment to any social environment. Gypsies have never adopted the mores of civilized life. They are morally and physically afloat in the world. There are in India and in the Russian empire great numbers of remnants of aboriginal tribes, and there are, all over the world, groups of pariahs, or races maudites [[[cursed races]]], which the great groups will not assimilate. The Jews, although more numerous, and economically far stronger, are in the same attitude to the peoples amongst which they live.