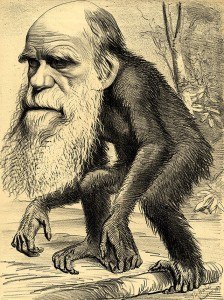 A hallmark of Yockey’s world-view is his anthropomorphization of concepts and abstractions. He spoke of them as if they were Greek Titans, with thoughts and goals of their own, distinct and set in opposition to one another.

At the root of it all Yockey saw two titanic ideas. From Imperium, page 115:

Two ideas are opposed — not concepts or abstractions, but Ideas which were in the blood of men before they were formulated by the minds of men.

But the greatest opposition of all has not yet been named, the conflict which will take up all the others into itself. This is the battle of the Idea of the Unity of the West against the nationalism of the 19th century. Here stand opposed the ideas of Empire and petty-stateism, large-space thinking and political provincialism.

Yockey’s Ideas are not ideas, but have agency and causality. His intangible immaterial mystical philosophizing is “organic”, while man and his rationalism is “inorganic”.

Yockey’s twisting of the meanings of words goes beyond poetic license, beyond an honest attempt to describe the indescribable. He verges into mysticism, detached from reality and facts, and in some cases to the contrary.

Nationalism and racialism are related, connected, complementary. Not opposites.

Yockey exalts telos (ultimate purpose or state) in his cosmology, constructing his envisioned universe such that an “organic” causal life force (existential source or basis of existence) operates unilaterally upon the mean, “inorganic” stuff of observable experience, which he debases.

Do ideas drive men, or do men drive ideas? The truth, I think, is not one or the other but both. Yockey arrogated telos (and causality, agency) to Ideas, while denying it to people. But Yockey himself was a man driven by ideas, to promote his ideas.

What constitutes organic? The organic is the inorganic plus something else. Yockey might have described this something as Ideas. I say the something is consciousness, awareness, agency. Consciousness is what distinguishes human life from inhuman, not to mention non-life, the inorganic.

The human soul itself — known as the “brain” in the 19th century — is only a tool by which a certain type of monkey advanced himself to man ahead of his fellow-monkeys. Teleology again: man became man in order that he might be man.

Yockey, like many critics of Darwinism, was apparently disturbed by the fact that man and monkey are biologically related, distant cousins. Similar like apples and oranges, the difference is consciousness – communication, coordination, history, culture.

It is understandable that Englishmen were the primary “social Darwinists”. Instrumental in deciphering the mechanics of life, of evolution, they naturally envisioned themselves as the result, the pinnacle of the process. This is more anthropic principle than anthropomorphism.

As a world view, Darwinism cannot of course be refuted, since Faith is, always has been, and always will be, stronger than facts. Nor is it important to refute it as a picture of the world, since as such it no longer influences any but day-before-yesterday thinkers. However, as a picture of the facts, it is grotesque, from its first assumptions to its last conclusions.

Yockey’s argument is even more applicable to his own faith in Ideas. Darwinism is based on science, a system farther from faith and closer to fact than any other man has yet devised.

In the first place, there is no “Struggle for existence” in nature; this old Malthusian idea merely projected Capitalism on to the animal world. Such struggles for existence as do occur

The capitalistic mentality, engaged in a competition to get rich, quite naturally pictured the animal-world also as engaged in an intensive economic contest. Both Malthusianism and Darwinism are thus capitalistic outlooks, in that they place economics in the center of Life, and regard it as the meaning of Life.

Yockey anthropomorphized capitalism, though it is defined and driven by men. It does not have an existence or will of its own. Such things are constrained and shaped by the same forces, the same reality as the life from which it springs.

The “struggle for existence” is only a conscious struggle in man, who naturally projects his own awareness onto the unaware. Yockey does it himself when he imagines carnivores “spiritually equipped for war”.

The competition in nature is over limited resources. The rule in nature is feast and famine. The rabbits boom, then the coyotes boom, then the rabbits crash, and then the coyotes crash. Darwinism is an observation of the rules of the reality of life. Not just how the environment shapes and molds life, but also how various forms of life shape each other. This involves not only competition/predation, but also cooperation/symbiosis.

Natural selection was the name given to the process by which the “unfit” died out to give place to the “fit.”

Fitness, in evolution, is not a moral or aesthetic value judgement. It is an objective metric: survival. Life fits its environment like clothes fit a body.

I suspect that Yockey’s lame arguments against Darwinism were based on by his misunderstanding and thus revulsion toward “survival of the fittest”. He was perhaps unwilling to face the fact that the jews have out-competed Whites, rule us, and are slowly killing us. The problem, as I see it, is not with Darwinism, or rationalism, or any philosophical clash, but the simple fact that Whites, relative to jews, are not conscious.

4 thoughts on “Yockey on Culture and Race – Part 5”