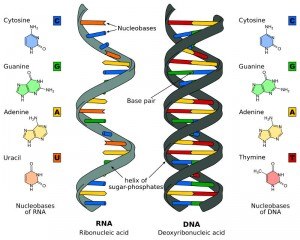 Race is rooted in biology. Physical and mental traits are heritable, mixed together and passed from parents to their children. The first hominids to domesticate animals must have had some grasp of this truth. Over time the understanding deepened and became animal husbandry, the science of breeding. What even pre-historic humans understood about animals they must have also seen applied just as well to themselves.

For a very long time racial inheritance could be thought of and described only metaphorically, using terms such as blood lines, with the importance of the semi-predictable recurrence of heritable traits encapsulated in terms such as pedigree.

Today we have a much more concrete idea of how heredity works, which is to say the biochemical mechanics of the process, or genetics. But in order to understand these workings we must learn a fair number of technical terms and concepts. Many racialists pick up this knowledge in bits and pieces. Unfortunately, in such circumstances we may need to hear or read a technical term many times before we come to appreciate what it means and how it relates to other terms. To make this process easier for beginners, and to help flesh out and reinforce the understanding some of you already have, I will attempt to lay out and connect here the most elementary terms and concepts of genetics.

Even though I will try make this as straightforward as I can, if much of this information is new to you, you will probably find it difficult to make sense of it all in one go. You may want to listen more than once. You may also find the text on the program page for this podcast more useful than usual, as it spells out all the technical words and provides many links you can follow to drill deeper than I intend to go.

Biochemistry, sometimes called biological chemistry, is the study of chemical processes within and relating to living organisms. By controlling information flow through biochemical signaling and the flow of chemical energy through metabolism, biochemical processes give rise to the complexity of life. Over the last 40 years, biochemistry has become so successful at explaining living processes that now almost all areas of the life sciences from botany to medicine are engaged in biochemical research. Today, the main focus of pure biochemistry is in understanding how biological molecules give rise to the processes that occur within living cells, which in turn relates greatly to the study and understanding of whole organisms.

Biochemistry is closely related to molecular biology, the study of the molecular mechanisms by which genetic information encoded in DNA is able to result in the processes of life.

Yes, we’re interested mainly in the subset of biochemistry having to do with genetics, i.e. molecular biology:

We’ll get to proteins in a minute.

RNA and DNA are chemicals, or more specifically biochemicals, or organic chemicals. These are very different from the relatively simple inorganic chemicals you may recall studying in chemistry class. Even the smallest amount of a simple inorganic chemical, such as water, contains billions of identical and relatively small molecules moving about loosely. Each molecule of water is just two hydroden atoms joined with an oxygen atom – which is why it’s called H2O. RNA and DNA molecules are far bigger and more complicated. They’re called macromolecules because they actually consist of millions of smaller molecules joined together in a long, thin chain.

DNA is an abbreviation for deoxyribonucleic acid. It is:

a molecule that encodes the genetic instructions used in the development and functioning of all known living organisms and many viruses. DNA is a nucleic acid; alongside proteins and carbohydrates, nucleic acids compose the three major macromolecules essential for all known forms of life. Most DNA molecules consist of two biopolymer strands coiled around each other to form a double helix.

RNA stands for ribonucleic acid, a nucleic acid similar to DNA. RNA has:

biological roles in coding, decoding, regulation, and expression of genes. … Like DNA, RNA is assembled as a chain of nucleotides, but unlike DNA it is more often found in nature as a single-strand folded unto itself, rather than a paired double-strand.

That’s already alot of jargon to digest. Let me just reiterate the most important point: DNA and RNA are, together with proteins and carbohydrates, the very essence of everything that we call life. And you could say that DNA is the essence of the essence.

As an aside, the Swiss scientist Friedrich Miescher first discovered the nucleic acids in 1869. They’re called nucleic acids because they’re normally found only in the nucleus of a living cell. Miescher knew that, and suspected that the nucleic acids could have something to do with heredity, but he didn’t know how. In fact most of what we’re describing here was discovered long after 1869.

DNA, RNA and proteins: The three essential macromolecules of life are all directly related. And it’s a circular relationship.

You can think of DNA and RNA as blueprints and proteins as workers. The chemical structure of DNA is more durable and redundant than RNA, thus DNA is the form the blueprints are kept in for long-term storage. When it’s time to build something, special proteins called polymerases attach to the DNA double helix and crawl along a portion of it – unzipping, copying, and rezipping – to produce a single short strand of RNA. This is called transcription.

A strand of RNA is essentially a partial, disposable copy of the DNA blueprints. Special proteins called ribosomes latch onto the RNA and use it as a template to manufacture protein molecules. This translation is called protein synthesis or biosynthesis.

To understand more precisely how DNA and RNA act as blueprints we need to describe their structure in more detail. As already mentioned, these macromolecules are long, thin chains of smaller molecules. The smaller molecules are called nucleobases or just bases. There are only four types. In DNA they are adenine, guanine, thymine and cytosine. In RNA uracil takes the place of thymine.

For our purposes it’s not important to remember the full names of these bases, much less their chemical structure. In fact, they are usually simply abbreviated as A, G, T (or U), and C. What is important is that you can think of these four bases as a four-letter alphabet in which information is encoded into DNA and RNA.

Recall that during translation a ribosome translates a bit of RNA into a protein. It actually does this by “reading” the sequence of bases one triplet at a time. AAC, GCG, UGA, … there are 64 unique combinations. Each different combination causes the ribosome to add a different kind of building block to the protein it’s assembling. These building blocks are called amino acids.

Recall that proteins, like RNA and DNA, are macromolecules. What happens is the ribosome combines these amino acids to form a greater number of even larger building blocks called peptide chains (AKA “polypeptides”). These chains are then assembled into the vast number of different proteins needed for life.

One interesting aspect of RNA translation is that it produces only about 20 different amino acids, because some of the 64 combinations of base triplets actually translate into the same amino acid. For example, UUU and UUC both translate into the amino acid abbreviated Phe. This redundancy provides some tolerance for mutations. If one base in the genetic sequence somehow changes into another there’s a chance that it will not have any noticable effect on the protein being manufactured.

Beyond DNA, RNA and proteins the next larger building blocks involved in the biomechanics of life are cells. There are two distinct types of cellular organization – the prokaryotic and eukaryotic – and a surprising relationship between them:

Living things have evolved into three large clusters of closely related organisms, called “domains”: Archaea, Bacteria, and Eukaryota. Archaea and Bacteria are small, relatively simple cells surrounded by a membrane and a cell wall, with a circular strand of DNA containing their genes. They are called prokaryotes.

Virtually all the life we see each day — including plants and animals — belongs to the third domain, Eukaryota. Eukaryotic cells are more complex than prokaryotes, and the DNA is linear and found within a nucleus. Eukaryotic cells boast their own personal “power plants”, called mitochondria. These tiny organelles in the cell not only produce chemical energy, but also hold the key to understanding the evolution of the eukaryotic cell.

DNA-based life seems to have developed in several steps, each with an increasingly complex structure. First came the single-celled prokaryotes, then some prokaryotes joined to form single-celled eukaryotes, and then eukaryotes somehow joined in multicellular arrangements to form all the larger organisms – the plants and animals.

Actually, there’s another chicken-and-egg problem here. Even the most primitive life, the prokaryotes, need DNA. Yet DNA cannot function outside of the protection of a cell. So how did this arrangement come into being in the first place? Once again biochemists don’t really know.

9 thoughts on “A Genetics Primer – Biosynthesis”