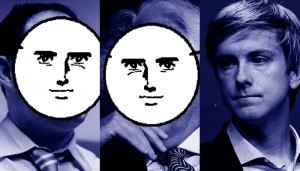 Whatever happened at The New Republic we know that there wouldn’t be a story without the jews. Yet so far mainstream jewsmedia accounts haven’t even hinted that there’s a jewish angle.

Over the past week a collection of strictly jew-less and thus at best half-true accounts have been offered by Scott McConnell at The American Conservative; Jacob Heilbrunn at Politico; Dana Milbank, Ben Terris and Cinque Henderson at Washington Post; and Ta-Nehisi Coates at The Atlantic. The most elaborate attempt to explain the story, minus the jews, has been Ryan Lizza’s long article at The New Yorker, Inside the Collapse of The New Republic.

Every one of the aforementioned authors knows that TNR was “a jewish magazine”, as former editor Peter Beinart described it in Haaretz. None of them made any explicit mention of this, even though it meant leaving a gaping hole in their story. No account of the latest shakeup discussed, for example, how the “anti-semitism” card got played over similar, but less substantial staffing changes in January of 2013.

While searching for some exception to this bolshevist omission I ran across an even more detailed Beinart-like article aimed at explaining the story to jews. Anthony Weiss’ article The New Republic Exodus Raises Doubts About Magazine’s Jewish Future was cross-published by several explicitly jewish media outlets. Weiss described how “the jewish identity of the New Republic” made it “a primary address for American Jewish thought” and “one of the elite American media outlets with a strong focus on Zionism and Jewish intellectual life”. He noted:

Evidence of The New Republic’s Jewish DNA could be seen in the lists that have circulated on the Internet of the approximately 60 percent of the masthead who quit. Easily half are Jewish — including Foer and Wieseltier, whose resignations on Thursday under pressure from management triggered the general exodus — and many have written about their own Jewish lives.

A number of prominent Jewish staffers at the New Republic have gone on to greater prominence at other publications.

Weiss also supplied an explanation why the jewish magazine was not being described as such in the mainstream American jewsmedia:

The magazine also came to serve as a sort of successor to the mid-century journals, like The Partisan Review and Commentary, that had served as homes to Jewish public intellectuals. Wieseltier famously joked that The New Republic saw itself as “a sort of Jewish Commentary” — the joke being that Commentary, which was founded by the American Jewish Committee and continues to publish, is explicitly Jewish.

The New Republic was never explicitly or exclusively Jewish, either in its staffing or its focus, and it was defined as much, if not more, by its self-declared (albeit idiosyncratic) liberalism. Still, it retained what Berman described as a “Jewish sensibility,” and became a center for young Jewish writers and journalists.

Get it? Jews who disguise their jewish identity and interests, as at TNR, are being more jewish than those who more openly advertise their jewishness, as at Commentary. The joke is on the clueless goy readers, and on Hughes, the sucker who poured millions into the magazine and thought he actually owned it.

The upshot is that what appears to be a disconnect isn’t really. The pretense, in the American jewsmedia at least, that the jewish magazine isn’t a jewish magazine is only a continuation of the same old dissimulation that has always been going on at TNR. Such crypsis is in fact an age-old modus operandus of the jews.

Last but not least, Weiss also provided a more plausible reason for all the stomping and screeching than any of the jew-less explanations have:

Although Hughes rehired Foer and retained Wieseltier, observers noted a shift in its focus on Jewish issues. “Chris Hughes really has a different sensibility than [former owner/editor] Marty Peretz,” said [Judith] Shulevitz, who just stepped down from The New Republic. “He didn’t have the lightning-like focus on Israel and foreign policy that Marty did.”