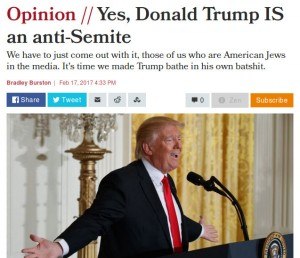 Nothing is more deserving of the epithet FAKE NEWS than the mainstream corporate jewsmedia, which for a year and a half has been promoting the big lie that Trump is a “fascist” “racist” “anti-semite” who is pandering to “White nationalists” and “neo-nazis”.

In reality Trump has repeatedly and explicitly disavowed “racists”, never says anything explicitly in favor of Whites, regularly praises and expresses his desire to serve non-Whites, and behaves especially deferential and servile toward jews. Trump has only ever appealed indirectly to Whites, by posturing as an opponent of (((political correctness))) and criticizing (((the globalist elite))). Recently he has called the jewsmedia “the enemy” and “fake news”. The jewsmedia screeching intensifies.

It’s all an elaborate charade.

Trump fails to treat his supposed enemy as if they really are an enemy, fails to call out their most blatant fakery. The jews despise and attack Trump, and in return Trump declares his love for the jews and defends them. Trump has surrounded himself with jews and like-minded kikeservatives. The jews bark. He obeys.

Federal authorities were investigating a wave of bomb threats at 10 Jewish community centers across the country on Monday, the FBI said.

In a statement, the bureau said it was helping investigate the threats as possible civil rights violations. The Justice Department’s Civil Rights Division was also investigating.

No one was injured, and the threats appeared to be hoaxes, the association said.

The events come just weeks after another round of bomb threats targeted 53 Jewish community centers across 26 states and one Canadian province during three days in January.

Ryan Lenz, a senior writer with the nonprofit Southern Poverty Law Center, which monitors hate groups, told NBC News that the threats coincided with what appeared to be a spike in hate speech and hate group activity since Donald Trump’s election.

“We don’t know who’s behind these threats,” Lenz said. “We don’t know if groups are organizing them. We do know they’re in line with an increase in hate incidents and bias incidents over the last three months.”

On Monday, the Anti-Defamation League issued a security advisory warning Jewish institutions across the United States to review the organization’s security manual and bomb threat guidance assembled by the FBI and the Department of Homeland Security.

“We look to our political leaders at all levels to speak out against such threats directed against Jewish institutions, to make it clear that such actions are unacceptable, and to pledge that they will work with law enforcement officials to ensure that those responsible will be apprehended and punished to the full extent of the law,” the group’s chief executive, Jonathan Greenblatt, added in a statement.

There’s no sneaky double-talk to decode here. Organized jewry is clearly claiming and the jewsmedia is clearly reporting that the “civil rights violations” they’re all screeching about are imaginary. No perpetrators have been identified. The simple fact is that jews expect their screeching alone to compel “political leaders at all levels” to single out and reward jews with very real privileged treatment.

Trump could have responded by maintaining his anti-media, anti-globalist shtick. “Look, this is the epitome of fake news. This is the best example of just how rigged the system is, how corrupt the globalist elite are. The most wealthy, most powerful, most organized group in America, who largely own and operate the dishonest media and drive the globalist agenda, are making outrageous demands based on imaginary claims. And as usual they’re doing this all for their own benefit, at the expense of the American people. Sad.”

During a visit to the National Museum of African-American History and Culture, Mr. Trump said he was reminded of the need to combat hatred “in all of its very ugly forms.” He spoke one day after 11 bomb threats were phoned in to Jewish community centers around the country and a Jewish cemetery in University City, Mo., was vandalized.

“The anti-Semitic threats targeting our Jewish community and community centers are horrible, and are painful, and a very sad reminder of the work that still must be done to root out hate and prejudice and evil,” Mr. Trump said.

This is the tough guy who never backs down, who always counter-attacks, at least as long as he can pretend he’s not talking to or about the jews. Trump is never more sincere and passionate than when defending the jews who despise him.

“The president’s sudden acknowledgment of anti-Semitism is a Band-Aid on the cancer of anti-Semitism that has infected his own administration,” said Steven Goldstein, the executive director of the Anne Frank Center for Mutual Respect. “When President Trump responds to anti-Semitism proactively and in real time, and without pleas and pressure, that’s when we’ll be able to say this president has turned a corner. This is not that moment.”

To justify their power and privilege the jews invert reality, claim that the bagel republic is hostile toward them. Trump aids and abets their fraud. He endorses it.

How to square the Trump who deplores “anti-semitic threats” and wants “to root out hate and prejudice and evil” with the Trump who promises to “unite the civilized world against radical islamic terrorism, which we will eradicate from the face of the Earth”? By noticing that there is nothing to square. The jews define “hate” and “evil”. The jews designate the threats to combat and eradicate. The jews call the tune, Trump dances.