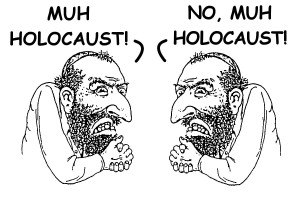 Following this exchange backward through time you see jews conducting an entirely jewy debate about what’s best for jews, trying to cloak it the hackneyed terms of left versus right only after it erupted out of the jewiest corners of the jewsmedia and threatened to become a full-blown shanda fur die goyim.

This particular debate came to light in the mainstream via Why The Resistance Is The Best Thing That’s Happened To Donald Trump, published by the Federalist’s senior editor David Harsanyi on 14 February 2017:

In a recent Atlantic piece titled “The Anti-Anti-Trump Right,” by Peter Beinart, the subheadline reads: “For conservative publications, the business model is opposing the left. And that means opposing the people who oppose Trump.” As is customary these days, the Left, much like Trump, questions the motives of political foes rather than addressing their arguments. Beinart goes on to name the two only honorable conservatives in the entire country (according to Democrats), David Frum and David Brooks.

Here is one jew describing another jew naming two other jews – without mentioning that it’s all about jewing. Unless you’re familiar with the names you might think the the story has nothing to do with jews. But here’s another little hint:

What seems to most vex critics of the anti-anti-Trump contingent (and I am mentioned in the Atlantic piece) is that conservatives aren’t appropriately agitated about the world that liberals see — a world that has turned out to be far less apocalyptic in the early going than they imagine. But if it’s a zero-sum choice they’re offering, that includes picking Neil Gorsuch over Planned Parenthood; tax cuts over teachers unions; Israeli Prime Minister Benjamin Netanyahu over Iran’s Holocaust deniers; deregulation of the bureaucratic state over legislation, or forcing progressive cultural mores on everyone. And so on.

What Beinart was actually talking about was a divide on the “right” between Whites and the “right”-posturing jews those Whites like to imagine are their allies. The Anti-Anti-Trump Right was published by The Atlantic on 13 February 2017:

Several weeks into the Trump presidency, one can divide the reaction among conservative commentators into three categories.

At one extreme sit those conservatives who championed Trump during the campaign, and still do: Breitbart, Sean Hannity, Laura Ingraham, Ann Coulter, among others. Their base is talk radio. They pride themselves on speaking for those plainspoken, dirt-under-the-fingernails conservatives who loathe not only Hillary Clinton, but Paul Ryan. Their chief enemies are globalism and multiculturalism, which they believe infect both parties, and are destroying America from without and within. Their ideological forefathers are Joseph McCarthy, George Wallace and Pat Buchanan, who claimed that America’s cosmopolitan, deracinated ruling elite had betrayed the white Christians to whom the country truly belonged.

At the other extreme sit conservatives like my Atlantic colleague David Frum, Johns Hopkins School of Advanced and International Studies Professor Eliot Cohen, and New York Times columnist David Brooks, who warned against Trump during the campaign, and believe he is now vindicating their fears.

Beinart’s first extreme, the White kikeservatives who love love love the jews but kinda sorta temporarily don’t like some of the jewed elite’s agenda, is what anti-White anti-Trumpers more commonly refer to as “racists”, “anti-semites”, “White nationalists/supremacists”, or simply “neo-nazis”. In Beinart’s eyes they are the chief enemy.

On the other extreme are Beinart and his tribemates, the anti-Trumpers who identify more with (((America’s cosmopolitan, deracinated ruling elite))). Beinart specifically names three “right”-posturing jews. He could have added vociferous anti-Trumpers Bill Kristol, John Podhoretz, Robert Kagan, Max Boot, Jennifer Rubin, or Jamie Kirchick to the list, but perhaps he thought that would make his point too plain.

Anyway, Beinart’s third category is who he is really upset about. This is the jewy group he’s calling anti-anti-Trump, whose modus operandi he describes aptly enough. “Their business model is opposing the left. And that means opposing the people who oppose Trump.” I.e. those jews who still believe their “right”-posturing is best for the jews.

Beinart is talking here about a White/jew divide and was actually responding to Nachama Soloveichik and other jews calling him out on a jew-jew divide, for critcizing jews as jews.

Liberal Jews are falling over one another to label President Trump the latest incarnation of Jew-haters from Pharaoh to Haman to Hitler.

These attacks have ranged from the exaggerated to the absurd. And while these inflated diatribes are concerning enough, a new theme has developed that is as baffling as it is destructive: Jew-shaming.

There has long been an expectation in Jewish circles that members of the tribe should support leftist policies and candidates. The thinking is that the Jews’ centuries-long persecution compels them to support the party that professes to protect persecuted minorities. Like women and African Americans, leftists are often shocked to stumble across the existence of conservatives who are Jewish, female, or black.

As a member of this endangered species, I’m familiar with this phenomenon. As a Jewish, female political conservative, I am often met with bewilderment. I am also sensitive to the history of persecution. I lost too many relatives in the Holocaust. This persecution is undeniable and unforgettable. What’s baffling is why people think they can decide for me, for Jared Kushner, and for any other Jew what Judaism means to us or how we should vote as Jews.

One of the “left”-posturing jews Soloveichik named was Jonathan Freedland, and as an example of his “jew-shaming” linked Jews must oppose Trump’s new order, published by The Jewish Chronicle on 26 January 2017:

Put simply, Jews should want nothing to do with Trumpism. Some might be drawn to the new president’s hawkishness on Israel, typified by his promise to move the US embassy from Tel Aviv to Jerusalem and his nomination of the pro-settler extremist David Friedman to serve as ambassador. But those who care about Israel’s future viability as a state both Jewish and democratic know such moves can only hurt, not help. They are a bottle of vodka left on the doorstep of an alcoholic: presented as an act of friendship, they are in fact an encouragement to self-destruction.

Put simply, Freedland is saying to jews, “Don’t fall for the destructive tricks we use on the stupid goyim!”

There is an obvious place for Jews in Trump’s world — standing against every last bit of it.

This is a jew speaking as a jew, calling for jews to unite as jews, because he thinks Trump is bad for the jews. But Soloveichik found an even jewier example:

The worst of the worst came from the Forward, where senior columnist Peter Beinart sought to indict Kushner’s moral identity as a Jew.

Beinart goes straight for the jugular, declaring Kushner a failure of Modern Orthodoxy.

And in this era of vicious political attacks spread on social media, we’d all do well to take a moment and ask ourselves, “Who are we, that we should issue religious indictments on our fellow Jews?”

Soloveichik’s point is on beyond Freedland and Beinart, a reminder to them and other jews that jews jewing transcends any Trump Trumping.

Beinart’s original article, Jared Kushner’s Moral Failure Indicts Orthodox Judaism, was published by the Forward on 31 January 2017. Beinart was trying to express his dismay about Kushner failing to stop Trump’s lame “muslim ban”, which came out as a typically overwrought rehashing of the same jew victim narrative that’s real in Soloveichik’s mind:

In remarkable ways, modern Jewish history echoes the passage from powerlessness to power that begins in the Book of Exodus. Therefore, the challenge for Jared Kushner, and everyone in our extraordinarily privileged generation, is to remember our ancestors’ suffering and honor their memories by defending the weak, vulnerable and oppressed today.

How could Kushner — a Modern Orthodox golden boy — fail to internalize that?

Kushner’s failure is not his problem alone; it should chill every Modern Orthodox educator, rabbi and parent in the United States. How could the Modern Orthodox community, a community that prides itself on instilling in its children Jewish knowledge and ideals, have failed so profoundly?

Thus what started with jews calling each other race traitors, identifying Whites as the enemy, by the time it eventually bubbles to the surface of the luegenpresse has nothing to do with jews and is all about Trump.