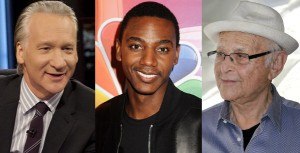 Notice all the cucks and niggers pretending to be offended at Bill Maher’s latest act, calling himself a house nigger. Among other things it demonstrates the power of taboos, how simply uttering certain magic words can unleash a torrent of emotion and vitriol, even if much of it is fake.

This tantrum Maher triggered has everything to do with mistaking him for “white”. In reality he’s anti-White. Indeed, he’s a shape-shifting transracialist mischling, a professional celebrity crypto-jew. He’s an actor-provocateur whose career consists of playing the white-faced minstrel, pissing on White norms while tilting impotently against semitical correctness. His job, couched in snark and irony, is to stake out what is or isn’t taboo and for whom, to spell out the unwritten rules by making an example of himself.

It is the pretense that Maher is “white”, an exemplar of “white privilege”, which makes his use of the word nigger “racist”. It is the white-washing of this jew’s jewing which makes it perfectly semitically correct to loath him. To call him out and loath him for being a particularly toxic jew is the exact opposite, perfectly semitically incorrect, six gorillion times worse than saying nigger.

Just prior to the hysteria Maher inspired the jewsmedia was busy promoting a positive attitude about niggers saying nigger. The difference is complementary, not contradictory. Whereas Maher’s shtick is aimed at demoralizing the White goyim, The Carmichael Show strikes a defiant tone aimed at emboldening the black goyim.

The jewsmedia’s PR included this helpful little aside:

The use of the word is not unprecedented – see All in the Family. But that aired “before political correctness,” jewsmedia house niggress Loretta Devine said at NBCU Summer Press Day

Yes, see All in the Family, the icebreaker for prime-time anti-White talmudvision. Bill Maher’s jewing pales in comparison to Norman Lear’s. The old kike is jewing away to this day, ever more openly relishing it as he descends into senility. In May Lear invited Jerrod Carmichael on his podcast specifically so they could say nigger together.

Listening in you’ll notice that the real Carmichael, behind the uppity talmudvision nigger act, is a true jewsmedia house nigger. Jewsmedia jews made him, own his black ass, and he’s happy with the arrangement. More to the point, notice that neither Lear nor Carmichael bother to pretend jews are White.

26 thoughts on “Niggers and Kikes, United Against Whites”