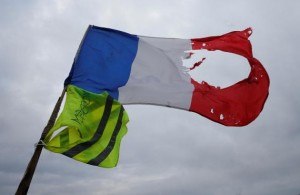 Gilets Jaunes, pronounced jillay june, refers to the yellow vests worn by protestors in a month-old uprising sweeping France. It’s difficult to understand what’s going on, but I’d like to. Did it begin as an organic (if unconscious and incoherent) revolt against jewing? How far will it go before it is put down, co-opted, or otherwise defused?

Despite one superficial indication – the use of a color in the name – this revolt doesn’t fit the usual Soros-driven color revolution mold. It appears instead to be an authentic populist revolt against a thoroughly jewed globalist ruling regime. For one thing, the anglophone jewsmedia has been trying to ignore or play down the demonstrations rather than tout and boost them. For another, the French police have made relatively free use of force and tear gas against the demonstrators, who are overwhelmingly visibly White, flying French flags and colors, and sallying forth mainly on the weekends. These are all indications that Gilets Jaunes is a legitimate expression of the indigenous French workers and taxpayers.

Here are a few other positive indications.

In Jews against the Gilets Jaunes, Czakal points out that Hervé Ryssen, perhaps the most thorough-going French critic of jewing, backs the uprising, while prominent jews and jew organs are condemning it.

Reflecting the zeitgeist of contemporary political discourse, whatever problems the jewed globalists don’t blame on “anti-semitism” or “White supremacism” they blame on Russians. So naturally… Eventually This Had To Happen: France Investigates Russia Over Yellow Vest Riots.