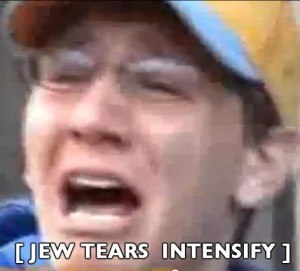 Concerning the jew victim narrative, AKA the jew version of history, which provides the much longer-term foundation for the past century’s jew-defined/jew-driven anti-White “anti-racism” and post-WWII identity politics. The latest twist in the jew narrative concerns intersectionality, which encompasses all the bitter squabbling over rank in the anti-White victim hierarchy. The Occupy Wall Street movement called this hierarchy the progressive stack.

Broadly put, intersectional jewing is what happens when one form of jewing comes into conflict with another. The conflict I focus on here arises mainly out of the clash between two jew narratives: the lie that jews are “white”, and the lie that Whites are evil. There is also a clash between the jew “anti-racism” fraud and the ongoing developments coming out of White science, mostly having to do with genetics and race.

In this podcast I reexamine a number of older topics and connect them with more recent examples.

The intersectional jewing connection first clicked for me while writing about Bret Weinstein at Evergreen. The Tuvel Affair and Trans-Reality are all about the jewing and alt-jewing around sexual degeneracy and transracialism/crypsis.

An early example was discussed in Liberalism as a Suicide Pact, which has to do with the common kikeservative assertion that “muh liberalism/constitution is not a suicide pact” (for the jews) originating from Jackson’s dissent in Terminiello.

The jewsmedia white-washing of the kikeservative Trump administration is discussed in A Tale of Two Steves: Decoding the Ongoing Bannonocaust and Intrigue in Trump’s Palace.

“When I went to Yale, in 1981, it said above the main gate ‘Lux et Veritas’: Light and Truth. We are here to find truth,” Haidt says as he paces the stage at the Students for Liberty conference in Washington. “This is our heritage all the way back to Aristotle, Plato, Socrates.” But the pursuit of truth is being supplanted by a new mission, he warns, the pursuit of social justice. He paraphrases Marx: “The point is not to understand the world; the point is to change it.”

It’s human nature to make things sacred — people, places, books, ideas, Haidt says. “So what’s sacred at a university?” he asks. “Victims are sacred,” he answers. And a victimhood culture offers only two ways to get prestige: Be a victim, or, if you can’t manage that, stand up for victims. How? “By punishing the hell out of anyone who in any way, shape, or form, even inadvertently, marginalizes a member of a victim class.”

He clicks to reveal a slide titled “The Six Sacred Groups.” “The Big 3” are Blacks, Women, LGBT. “The Other 3” are Latinos, Native Americans, Disability. The list of sacred victims, he says, is growing. Among the newly sacrosanct are Muslims, transgender, and Black Lives Matter. “I’m in no way saying these are not victims,” Haidt says. “I’m not dismissing claims of systemic racism. I’m just pointing out that the quasi-religious conflicts we have on campus nowadays tend to revolve around these groups.”

Hysterical Jamie Kirchick’s Dykes vs. Kikes. The official response from the dykes:

Zionism is an inherently white-supremacist ideology. It is based on the premise that Jewish people have a God-given entitlement to the lands of historic Palestine and the surrounding areas. This ideology has been used to justify dozens of laws that discriminate against Palestinian citizens of Israel, segregated road systems in the West Bank, and forced removal of Palestinian families from their homes in order to make way for Jewish-only housing, among other violent and discriminatory practices. We recognize that Zionism is not synonymous with Judaism, but instead represents an ideology that uses legacies of Jewish struggle to justify violence.