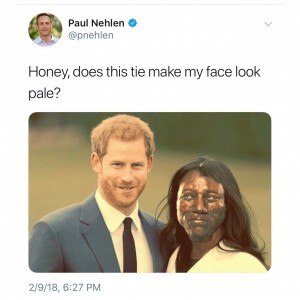 Race is real. Race matters. The jews define the moral and financial terms in which nearly everyone else thinks. They use this power to disarm, manipulate, exploit, and ultimately destroy others. If hearing any of those points clearly enunciated reminds you of jews screeching, then you know what semitical correctness is. The other, original sandnigger sharia.

Since 1945 race science continues under new euphemisms, though largely with the direct involvement if not supervision of hyper-conscious tribemembers. Resources are allocated and mainstream interpretations are shaped as per “good for the jews”.

The results show, contrary to popular belief, that the founding generations of Britons owed more in appearance to Paleolithic Africans, from whom all humans descend.

Up to nine previous colonisations of Britain, via the now flooded European landbridge known as Doggerland, had been wiped out due to harsh temperatures.

But the roughly 12,000 humans in Britain at the time of Cheddar Man thrived and their DNA now comprises roughly 10 per cent of the genetic make-up of most white people currently living in the UK.

The essence of the aggression:

Dr Yoan Dieckmann, from University College London, who took part in the project, said: “The historical perspective that you get just tells you that things change, things are in flux, and what may seem as a cemented truth that people who feel British should have white skin, through time is not at all something that is an immutable truth.

“It has always changed and will change.”

Science politicized, weaponized poz, White genocide. Also, shut it down. Mr. Composite: “Cheddar Man being used politically to synthesize: 1. All shades of dark skin color are supra-racial “black” (I remain unconvinced of black Britons) 2. Since we’re all “black,” the West must accept its demise via mass immigration “because we’re all black immigrants.” Also, jews.…”

Black Cheddar as part of the larger one-race-the-migrating-mixing-nigger-race narrative. The following article is the closest the jewsmedia gets to telling the truth about the racial history of Britain. What’s conspicuously missing from such tales is any actual discussion of race – the genetic similarity of the peoples who conquered, colonized, and combined then, much less the glaring dissimilarity of the contemporary multicult. After Cheddar Man: How the mongrel English found their home during the Dark Ages:

By 954… A mongrel people had at last secured a safe place in which to live.

An analogous question of origins in North America. Here the racial nature of the conflict is made fairly explicit, from an anti-White point of view. Rejecting the Solutrean hypothesis: the first peoples in the Americas were not from Europe:

First, in addition to the scientific problems with the Solutrean hypothesis which I’ll discuss shortly, it’s important to note that it has overt political and cultural implications in denying that Native Americans are the only indigenous peoples of the continents. The notion that the ancestors of Native Americans were not the first or only people on the continent has great popularity among white nationalists, who see it as a means of denying Native Americans an ancestral claim on their land. Indeed, although this particular iteration is new, the idea behind the Solutrean hypothesis is part of a long tradition of Europeans trying to insert themselves into American prehistory; justifying colonialism by claiming that Native Americans were not capable of creating the diverse and sophisticated material culture of the Americas.

☼ Survive the Jive ☽ : “Cheddar man, green triangle on this PCA, plots with other European Holocene samples (brown shapes) as I expected. Closest modern genetic match is Northern Europeans (Baltic/Nordic/British). Non-Europeans are even further away from him! #CheddarMan Read it and weep lefties… https://t.co/g3XmH30e5m ”

☼ Survive the Jive ☽ : “You can see how the mesolithic British samples are distinct from the Neolithic ones which more closely resemble modern Iberians than modern Brits. That is because we descend from the Indo-European beaker folk invasion 4.5k years ago”

In 1997 Professor Bryan Sykes of Oxford University claimed to have obtained mitochondrial DNA sequences from Cheddar man, Britain’s oldest complete skeleton. The Mesolithic remains were found in Gough’s Cave in Cheddar Gorge, Somerset, and now reside in the Natural History Museum in London. Results were obtained for hypervariable region 1, and a DNA match was found with a local man Adrian Targett. The story was reported in a number of newspapers at that time including The Independent and the Los Angeles Times. The story of the DNA testing of Cheddar Man was subsequently recounted in Chapter 12 of Sykes’ book The Seven Daughters of Eve (Bantam Press, 2001). Significantly, however, the research has never been published in a peer-reviewed scientific journal. Ancient DNA testing has advanced considerably since 1997, and it is now appreciated that very strict protocols need to be followed. (See, for example, Ancient DNA: do it right or not at all and How to tell if an ancient DNA study is legitimate.) The results of the 1997 testing are, therefore, subject to reasonable doubt. Bandelt et al (2005) have suggested that the sequence was from contaminating modern DNA. We understand that the Natural History Museum have plans to resequence Cheddar Man’s DNA.

Skin color DNA. Pozzidonius: “Now that the Cheddar Man DNA paper was released today, below are my final thoughts on the authors’ findings re: his skin pigmentation (tl; dr: They didn’t even look for the right gene when making the “dark/black skin” prediction)…”

In other words, the evidence now points to West/East Africans and Ancestral South Eurasians developing dark/very dark skin from a series of mutations & selection on the MFSD12 gene, while northern Europeans’ lighter skin resulted from a analogous process primarily on the SLC24A5 gene. Some Northeast Asians (particular Tungusic-speakers and the [likely related] population referred to by Japanese as the “Yayoi” type) appear to have developed their own lighter skin based on an as yet-undiscovered gene distinct from SLC24A5.

Why did the Cheddar Man study neglect the Crawford et al paper, which was released 5 months prior? Why did the Cheddar Man authors go out of their way to revisit the skin color debate for WHGs (they seemed to feel the need to “correct” the Loschbour study by asserting that Loschbour, too had “very dark” skin) and Anatolian Farmers without even bothering to test literally the only SNPs known to cause “dark to very dark” skin color in non-Africans???

The authors simply start from the faulty assumption that dark/very dark skin was the ancestral phenotype for all human populations everywhere, when the reality seem that this trait is just as derived as light skin. Totally unacceptable from an academic viewpoint.

If Cheddar Man lacked the variant SNPs on MFSD12 (as expected), the chances are extremely high that he possessed “intermediate” skin coloration, likely within the range found in the modern Near East.

Despite the wide range of skin pigmentation in humans, little is known about its genetic basis in global populations. Examining ethnically diverse African genomes, we identify variants in or near SLC24A5, MFSD12, DDB1, TMEM138, OCA2 and HERC2 that are significantly associated with skin pigmentation. Genetic evidence indicates that the light pigmentation variant at SLC24A5 was introduced into East Africa by gene flow from non-Africans.

To sum up: Even relatively subtle racial differences can be objectively detected, even in relatively ancient DNA. The “black Cheddar” narrative is agitprop, a form of psychological warfare.