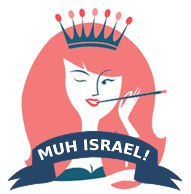 Cole makes the perennial argument made by all “right”-posing jews: White nationalists should support “muh Israel” because it’s stupid and crazy to do otherwise.

The Alt-Right Gets a Wedgie at Taki’s Magazine:

During my Holocaust revisionist years in the 1990s, I encountered—no surprise here—lots and lots of “anti-Zionists.” After my forced reemergence as David Cole in 2013, I encountered even more. People in those circles continue to be amazed that I’m a supporter of Israel. I, on the other hand, continue to be amused at the level of anti-Israel sentiment that exists among self-described white nationalists and alt-rightists. I don’t quite get it. Israel is the closest thing to “the West” in that fetid sandlot known as the Middle East, and Israelis do exactly the types of things that white nationalists and alt-rightists want to do themselves (build walls to halt immigration, unapologetically racially profile in the name of safety, unashamedly fight to preserve an ethno-state, etc.). Yet rather than admiration from the “white right,” Israel gets hostility.

Those [Palestinian/pro-Palestinian] guys were like the Islamic version of the most exaggerated Hollywood stereotypes of hillbillies. “Muh lah-yand! Git off muh lah-yand! They dun took muh lah-yand!” Anytime I would try to have a rational discussion with one of those sad sacks, the discussion would always revert back to “the Jews took our land,” as though that magical statement had the power to kill any debate about tactics.

I really don’t understand why the whining of Palestinians catches the ear of anyone on the alt-right. I mean, the cornerstone of the Palestinian cause is that they were “colonized by Europeans” who “grabbed land via warfare.” And you, Mr. Alt-Righter, are sympathetic to that complaint? You think we should force Israel to “give that land back”? Funny, because when the Aztlán loons in the Southwest also claim to have been “colonized by Europeans” who “grabbed land via warfare,” and when they claim that Mexico deserves to “get that land back,” I don’t hear a lot of sympathy. In fact, all I hear from alt-rightists is “Hey, wars happen. The Indians fought; they lost. The Mexicans fought; they lost. We don’t owe them their land back.”

I just don’t accept the notion that gaining territory through war suddenly became a crime against humanity in 1945, right after—and what a coincidence this is!—the victorious Allies gained a shitload of territory from Germany following World War II. That 1945 “deadline” is arbitrary, and I don’t buy into it. As far as I’m concerned, Israel has a right to keep every damn square inch of land it won, and I don’t see that as a position that betrays any particular pro-Jewish or anti-Muslim bias.

In the 1980s, South African blacks, on advice from leftist whites (and, ironically, Jews) decided to take a very sound piece of advice: Stop committing terrorist acts against white South Africans. Don’t traumatize the folks who have to approve the dissolution of their own rule. Reserve your violence (like, say, those snazzy burning-tire “necklaces”) for the traitors in your own ranks. But to whites, be all Gandhi-like, be all “oh, heaven forbid, I’d never use violence in my quest for freedom,” and in no time at all, the name Mandela will become synonymous with Jesus. And it worked. Black South Africans got majority rule, and slowly but surely they’re getting the ethnic cleansing that their PR machine promised they didn’t seek.

Overreaching and overarching conspiracy theories about “Zionist influence” might be comforting to those who want to see Israel as the octopussian world center of all that is evil, but don’t expect Trump to share that worldview.

Like most jews, Cole has nothing but contempt for Whites. Essentially he’s whining because he imagines alt-right Whites might sympathize more with other goyim than jews, and he’s worried that might be bad for the jews.

Beside deliberately misrepresenting the relationship between jews and Whites this particular type of you-goyim-should-support-Israel argument also falsely equates jew-first “zionism” with nationalism. The fact is that the jews have always been parasites, living among and feeding upon Europeans before and after Europe divided into ostensibly sovereign nationalist states.

“Zionism” is a euphemism for the more blatant form jew parasitism has taken specifically after jew-firstism prevailed over White racialism in World War II. It is the idea that jews get a sovereign jew ethnostate and everyone else gets “democratic” states with governments, full of jews, dedicated to “combating racism and anti-semitism” and serving the alien jew ethnostate. And whatever else anyone pretends it means, “muh holocaust” serves as the primary rationale for this grotesque reality.

Jews don’t feel guilty about any of this. On the contrary, even before White resentment can coalesce jews screech as one that the real harm is being done to them. Many jews regurgitate some form of “singling-out the jews” counter-accusation, projecting their own jew-centric mindset, trying to guilt-trip deracinated “liberal” Whites for caring. Cole is aiming at more race- and jew-conscious Whites. Rather than deny the impact of jewing he attempts to obscure and minimize it. He sneers “you’re just jealous”, as if it were more desirable to ape jew parasitism than end it.

Once you properly perceive the jews for what they actually are this type of disingenuous argument not only falls flat, it comes across as a particularly insidious form of hostility. The answer is simple. Jews aren’t White, they’re anti-White. White nationalism and jew parasitism aren’t alike, they’re antithetical. There is no moral or logical obligation to sympathize with an enemy, and jews posing as allies, advising Whites how to better serve jews, are the worse kind of enemy.