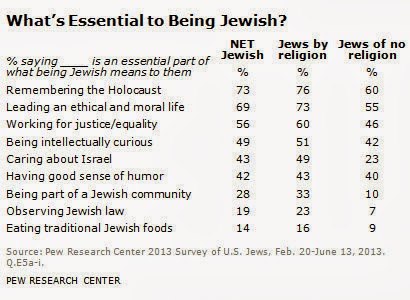 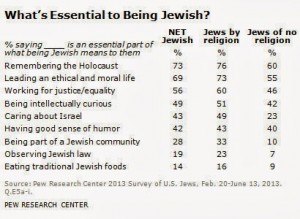 The term “jews of no religion” presents a problem for those who misunderstand (or want others to misunderstand) the true nature of jewishness, specifically by mistaking it as a type of theology or “faith”. The second page of the report, Sidebar: Who is a Jew?, finesses the problem with the usual double-talk:

One of the first decisions that had to be made in conducting this study and analyzing its results was to answer the question, “Who is a Jew?” This is an ancient question with no single, timeless answer. On the one hand, being Jewish is a matter of religion – the traditional, matrilineal definition of Jewish identity is founded on halakha (Jewish religious law). On the other hand, being Jewish also may be a matter of ancestry, ethnicity and cultural background.

Jewish Crypsis – Half-Jews – Part 2 goes over the issue of matrilineality and the biological nature of jewishness in more detail. Suffice it here to note that even the “religious law” is actually a matter of ancestry. So the “ancient question” does in fact have a “single, timeless answer”. Being jewish is, and always has been, a matter of ancestry. All along the jews have also pretended otherwise.

The primacy of ancestry comes through in the flowchart Pew uses to describe how they categorized poll participants. Those who “were raised jewish or have a jewish parent” but profess no “religion” are counted as jews. Those who claim no jewish parent are excluded, even if they regard themselves as jewish.

It’s not on the flowchart, but Pew also inquired about the parents of those who claimed to be “jews by religion”. They buried those numbers (and another hint of the primacy of ancestry) in a brief reference in Chapter 3: Jewish Identity:

Nearly all Jews say they had at least one Jewish parent, including 96% of Jews by religion and 97% of Jews of no religion.

All in all, 98% of Jews (and, by definition, 100% of Jews of no religion) were raised Jewish or had at least one Jewish parent; 2% of Jews had no such background but indicate they had a formal conversion to Judaism, while 1% did not formally convert.

In other words, jewishness is 96-97% a matter of ancestry.

Here are a few more of the relevant and interesting bits from that same chapter. According to jews this is what being a jew is about:

U.S. Jews see being Jewish as more a matter of ancestry, culture and values than of religious observance. Six-in-ten say, for example, that being Jewish is mainly a matter of culture or ancestry, compared with 15% who say it is mainly a matter of religion. Roughly seven-in-ten say remembering the Holocaust and leading an ethical life are essential to what it means to them to be Jewish, while far fewer say observing Jewish law is a central component of their Jewish identity. And two-thirds of Jews say that a person can be Jewish even if he or she does not believe in God.

Importance of Being Jewish

More than nine-in-ten Jews (94%) agree they are “proud to be Jewish.” Three-quarters (75%) say they have a strong sense of belonging to the Jewish people, and about six-in-ten (63%) say they have a special responsibility to care for Jews in need around the world.

What Does it Mean to be Jewish?

From this it’s clear that jewishness is more about peoplehood than religion, more biological than ideological. In fact the ideological portion is just another facet of the biological portion. In spite of their many profound ideological differences, the core beliefs that jews share most religiously have to do with seeing themselves as part of and concerned for the well-being of their people, a biological collective.

Theologically speaking, note that the jewish collective sees God as unnecessary but regards their guilt-tripping and extortion narrative as essential. 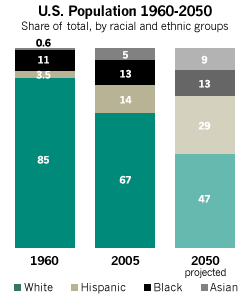 You may have seen the executive summary, or one of many news articles summarizing the summary. Some even contained nuggets of truth. For instance, USA Today’s U.S. Hispanic population to triple by 2050:

“Immigration has long-term consequences on the make-up of the country and the size of the population and we need to take those results in account when we make immigration policy,” says Mark Krikorian, executive director of the Center for Immigration Studies, a group that promotes limits on immigration. “Growing our population by 100 million more than we would otherwise is a choice. Immigration is a choice. … It’s all up to us.”

“Fifty years ago, we didn’t have the definition for the Hispanic population.”

Right. Fifty years ago there were hardly any latinos in the US. Nobody then would have predicted that fifty years later they would outnumber blacks. Well, here we are. How can anybody accurately project what the US population will look like fifty years from now? They can’t.

Then there’s this article from AFP, titled Whites to be minority in US by 2050: study:

Immigration will drive the population of the United States sharply upward between now and 2050, and will push whites into a minority, projections by the Pew Research Center showed Monday.

“If current trends continue, the population of the United States will rise to 438 million in 2050, from 296 million in 2005,” an increase of nearly 50 percent, the study by the Washington-based think-tank said.

More than 80 percent of the increase will be due to immigrants arriving in the country and their US-born children, who will make up nearly one in five Americans by 2050 compared with one in eight in 2005, it said.

Whites, who currently make up around two-thirds of the US population, will become a minority (47 percent) by 2050, the report said.

The Hispanic population, currently the largest minority group, will triple in size and double in percentage terms from 14 percent in 2005 to 29 percent in 2050, the report said. 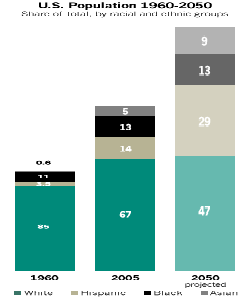 You can’t accuse USA Today or AFP of hiding the agenda. It’s right there in the headlines. In their articles they even summarize the strategy: Import non-whites until the Whites are swamped.

This is clearly illustrated by the graphs above. Well not the first graph, which comes from the Pew executive summary and was reproduced in some of the news coverage of their report. The second graph better represents the truth. I created it by resizing the original bars so they were all one pixel high per million people, then I shrank the image down to the same height as the original.

For reference, here are the numbers (in millions) computed from the graph’s totals and percentages:

One truth clearly visible in the modified graph is that the growth in US population since 1960 is mostly from immigration. There were hardly any latinos or asians then, now there are millions. Another truth, not emphasized but buried in the full report, is that the White population is the slowest growing. In contrast the asians, blacks, and latinos reproduce and/or migrate like rabbits – and all of these “minorities” will, unless trends reverse, eventually outnumber Whites.

The truth is in fact even worse than that. The Pew numbers for 2005 are guesstimates, because after more than two decades of rampant illegal immigration nobody knows for sure how many people are actually in the US. I think we can be certain more than “12 million” are invaders. 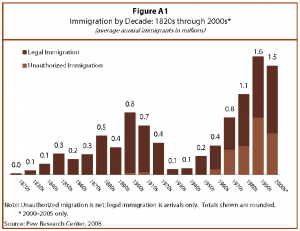 This truth is partially reflected in the (appropriated colored) brown graph, taken from Pew’s full report. Ever since Congress passed the Immigration and Nationality Act of 1965 legal immigration levels have steadily risen to unprecedented levels. The graph fails to reflect the non-white nature of the change, but it does at least reveal the increasingly illegitimate nature of immigration. It has become an invasion.

The media provides daily lectures concerning threats like overpopulation, global warming, and carbon footprints. A “public service announcement” I heard on the radio yesterday is typical. One somber voice after another proclaimed their earnest desire to preserve the environment of California and the world “for my children” to “ensure they enjoy the things I have”.

Our insane and mendacious intelligensia wants Whites to be concerned about passing a healthy environment on to our children. So concerned that we’ll forgo reproduction and welcome hordes from the turd world! Oh and by the way, make sure to be a loyal consumer and for the good of the economy go forth and borrow and spend like there’s no tomorrow.

“No hope for tomorrow White man, live for today” – that’s the message isn’t it? A healthy and virtuous intelligensia would long ago have alerted us: “wake up White man, your government is subverted, your nation invaded, stop it and start making babies”.

As early as 1968 Enoch Powell did raise the alarm:

As I look ahead, I am filled with foreboding. Like the Roman, I seem to see ‘the River Tiber foaming with much blood’. That tragic and intractable phenomenon which we watch with horror on the other side of the Atlantic but which there is interwoven with the history and existence of the States itself, is coming upon us here by our own volition and our own neglect. Indeed, it has all but come. In numerical terms, it will be of American proportions long before the end of the century. Only resolute and urgent action will avert it even now. Whether there will be the public will to demand and obtain that action, I do not know. All I know is that to see, and not to speak, would be the great betrayal.