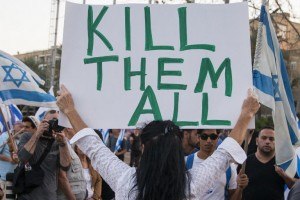 Left-posing jew Weiss writes, Charlottesville is moment of truth for empowered U.S. Zionists (who name their children after Israeli generals):

For a long time, liberalism and Zionism have gotten along fine in America– just look at the Democratic Party and its love for Israel. But Charlottesville represents a crisis for liberal Zionists. When they condemn white nationalism in the U.S. and celebrate Jewish nationalism in Israel, the contradiction is obvious to all.

Weiss cites three contemporary jew voices. Below I’ll cite a prominent opposing voice from the past.

The extent of the contradiction is worse than Weiss admits. The jews have an ethnostate, a state explicitly by for and of jews, whereas Whites have none. Not one. Even outside their explicit ethnostate the jews have laws specifically protecting themselves and their ethnostate from criticism. Jews claim that jews are White, that Whites have privilege and thus deserve to be oppressed, and that jews are oppressed by Whites and thus deserve their privilege. When Whites object even indirectly to any aspect of this jewing the jews swarm forth as a tribe and screech louder for even more special funding and protection from their ostensibly liberal host state.

So-called liberals and their liberal democratic states aren’t advertised as elevating one group above others. Quite the contrary. Yet they openly elevate the jews above all others, and especially above Whites. That’s the big contradiction. Zionists do not merely support a state for jews, they oppose any state for Whites. They regard Whites and jews as political opposites. That’s not a contradiction, it’s the parasite having its cake and eating its host too. Liberalism has always served the jews, providing the means by which any and all forms of jewing have been simultaneously advanced and defended.

Charlottesville makes this conversation urgent because the hypocrisy of the Democratic leadership hurts resistance to intolerance. You can’t be righteously anti-nationalist in the U.S. and evangelists for Jewish nationalism over there.

This is not just good liberal philosophy. It’s the best policy to fight anti-Semitism. Israel’s status as a human-rights abuser is now its global reputation; and Jews and Jewish organizations who blindly defend it are hurting the reputation of Jews.

It is behind the mask of liberalism that academia, corporations, and the mainstream media have issued a constant stream of increasingly hostile rhetoric psychopathologizing and demonizing Whites. Whites who collaborate are rewarded, even if only temporarily. Whites who resist, even if only rhetorically, are punished. And behind that same liberal mask the same powerful institutions actively denounce and suppress any criticism of jews.

The snarling illiberal reality of this anti-White/pro-jew regime is deliberately concealed behind its smiley weaponized buzzterms. The jews cry “tolerance”, “social justice”, “diversity”, and “equity” as they strike “nazis”, by which they mean Whites, then screech “anti-semitism” when they imagine some ricochet might possibly hit the jews.

Weiss is an apologist for his tribe posing as a critic. He postures as a liberal but frets specifically about the best interests of jews. He minimizes the harm jewing causes Whites. He’s concerned about the potential harm any backlash might cause jews.

Yair Rosenberg provides a more overt example of jew hostility toward Whites. Unlike Weiss, Rosenberg makes no pretense that he’s a liberal and offers no apologies for being obsessed with whatever is best for the jews, in or out of their jew state. Unlike Weiss, Rosenberg’s toxic anti-White opinions are shamelessly amplified by the corporate mainstream jewsmedia.

Rosenberg recently jewsplained Why There’s No Such Thing as White Zionism, directly addressing the anti-White/pro-jew cake-eating Weiss misidentifies. Rosenberg describes the problem as sneaky White nationalists stupidly trying to use liberal-zionist double-talk in the same way jews have. Smirking Rosenberg admits that the argument is senseless, because jews are oppressed and Whites are oppressors, i.e. because jews aren’t White.

Writing nearly a century ago Adolf Hitler discussed this same apparent contradiction and described how he came to understand that jews aren’t Germans, how this fictitious conflict between liberalism and zionism brought about this realization:

It was not until I was fourteen or fifteen years old that I frequently ran up against the word ‘Jew’, partly in connection with political controversies. These references aroused a slight aversion in me, and I could not avoid an uncomfortable feeling which always came over me when I had to listen to religious disputes. But at that time I had no other feelings about the Jewish question.

There were very few Jews in Linz. In the course of centuries the Jews who lived there had become Europeanized in external appearance and were so much like other human beings that I even looked upon them as Germans. The reason why I did not then perceive the absurdity of such an illusion was that the only external mark which I recognized as distinguishing them from us was the practice of their strange religion. As I thought that they were persecuted on account of their Faith my aversion to hearing remarks against them grew almost into a feeling of abhorrence. I did not in the least suspect that there could be such a thing as a systematic anti-Semitism.

Then I came to Vienna.

Once, when passing through the inner City, I suddenly encountered a phenomenon in a long caftan and wearing black side-locks. My first thought was: Is this a Jew? They certainly did not have this appearance in Linz. I watched the man stealthily and cautiously; but the longer I gazed at the strange countenance and examined it feature by feature, the more the question shaped itself in my brain: Is this a German?

As was always my habit with such experiences, I turned to books for help in removing my doubts. For the first time in my life I bought myself some anti-Semitic pamphlets for a few pence. But unfortunately they all began with the assumption that in principle the reader had at least a certain degree of information on the Jewish question or was even familiar with it. Moreover, the tone of most of these pamphlets was such that I became doubtful again, because the statements made were partly superficial and the proofs extraordinarily unscientific. For weeks, and indeed for months, I returned to my old way of thinking. The subject appeared so enormous and the accusations were so far-reaching that I was afraid of dealing with it unjustly and so I became again anxious and uncertain.

Naturally I could no longer doubt that here there was not a question of Germans who happened to be of a different religion but rather that there was question of an entirely different people. For as soon as I began to investigate the matter and observe the Jews, then Vienna appeared to me in a different light. Wherever I now went I saw Jews, and the more I saw of them the more strikingly and clearly they stood out as a different people from the other citizens. Especially the Inner City and the district northwards from the Danube Canal swarmed with a people who, even in outer appearance, bore no similarity to the Germans.

But any indecision which I may still have felt about that point was finally removed by the activities of a certain section of the Jews themselves. A great movement, called Zionism, arose among them. Its aim was to assert the national character of Judaism, and the movement was strongly represented in Vienna.

To outward appearances it seemed as if only one group of Jews championed this movement, while the great majority disapproved of it, or even repudiated it. But an investigation of the situation showed that those outward appearances were purposely misleading. These outward appearances emerged from a mist of theories which had been produced for reasons of expediency, if not for purposes of downright deception. For that part of Jewry which was styled Liberal did not disown the Zionists as if they were not members of their race but rather as brother Jews who publicly professed their faith in an unpractical way, so as to create a danger for Jewry itself.

Thus there was no real rift in their internal solidarity.

This fictitious conflict between the Zionists and the Liberal Jews soon disgusted me; for it was false through and through and in direct contradiction to the moral dignity and immaculate character on which that race had always prided itself.

Yes. Race and morality are key. Liberalism and zionism are simply code for death by jewing. They have mutated somewhat yet remain two faces of the same jew-first moral fraud. Both incite non-jews into fighting “racism” (Whites being White) and “anti-semitism” (anything that interferes with jews jewing). Both are championed by jews for the benefit of jews.

Hitler described accurately not only what was happening in Germany in his time, but also foresaw the jew-dominated future we’re now living:

The Jewish domination in the State seems now so fully assured that not only can he now afford to call himself a Jew once again, but he even acknowledges freely and openly what his ideas are on racial and political questions. A section of the Jews avows itself quite openly as an alien people, but even here there is another falsehood. When the Zionists try to make the rest of the world believe that the new national consciousness of the Jews will be satisfied by the establishment of a Jewish State in Palestine, the Jews thereby adopt another means to dupe the simple-minded Gentile. They have not the slightest intention of building up a Jewish State in Palestine so as to live in it. What they really are aiming at is to establish a central organization for their international swindling and cheating. As a sovereign State, this cannot be controlled by any of the other States. Therefore it can serve as a refuge for swindlers who have been found out and at the same time a high-school for the training of other swindlers.

As a sign of their growing presumption and sense of security, a certain section of them openly and impudently proclaim their Jewish nationality while another section hypocritically pretend that they are German, French or English as the case may be. Their blatant behaviour in their relations with other people shows how clearly they envisage their day of triumph in the near future.

The jew war on Whites is waged stealthily under the fiction that jews are White. It started and will end with the realization that they aren’t.