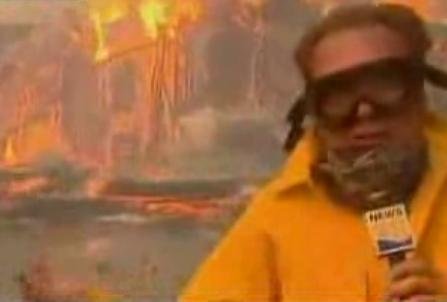 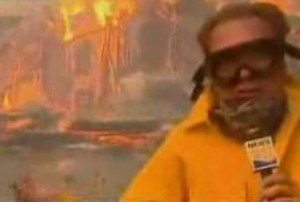 There was a time not too long ago when the word holocaust might have been among the handful of useful words in a context such as this. Today however that word has been usurped in such a way that to even try to use it in any of its older meanings is considered politically incorrect. Which is of course why I use it now. Who nitpicks PC language diktat when their family is under evacuation orders? A flaming (har har) anti-semite of course!

Being evacuated and sleeping on someone else’s floor certainly can make you punchy. That’s about the only excuse I can think of for spending hours atitter over the lame impression of Abbot and Costello with which we kept ourselves amused: "Which fire? The Witch Fire. Yes, which one? No, they’re calling it the Witch Fire. Stop playing games, my house might be gone!" Well OK, it might also have had something to do with the alcohol.

Anyone in San Diego who would like to know what it smelled like in NYC up until the late 1970s, step outside right now and take a deep breath. That’s what public housing projects running trash incinerators smell like. Likewise the ash. For extra credit now go about your life without a filter mask. We didn’t have sissy crap like that back then. Mom said go out and play in the ash. And we liked it that way.

Parallels with Katrina are already being made. "Our Katrina" some blubber in a pathetic appeal for sympathy. I wasn’t there and don’t know anyone who was but it is easy to imagine that deluge being more terrible for more people all at once and for a longer duration than the gradual and near deathless hit-or-mostly-miss holocaust has been, so far, for San Diegans – but perhaps that’s only because I haven’t lost my home. If I had I know I’d sure be pissed off at the CDF and military twits who kept some great firefighting hardware grounded yesterday with their intra-governmental bureaucratic pissing contests.

At any rate it’s a bit premature to be making unripened apple to moldy orange comparisons. The full glory of the Katrina debacle took more than a week to unfold. The fires here aren’t under control yet and whatever hasn’t burned is still dry as a bone. The Santa Ana winds could whip up again as easily as they died away, and that would give us a bitter taste of what the Gulf Coasters felt as Rita bore down on them before they had even dried out from Katrina.

Nevertheless, interesting comparisons are already being made between the general tone of civility at Qualcomm stadium today versus the distinctly uncivilized environment at the Superdome back then. If not then allow me to be the first to make one. I’m sure we can believe our politicians when they say, amid their endless and eminently ignorable mutual admiration and backpatting, that race has absolutely positively nothing to do with the different outcomes. Racism, on the other hand, definitely does. Not that I’ve actually heard any of them do anything but admire themselves for their hard work (do they think they’re mexicans?) and superior bureaucratic skills (as if that’s a good thing) but I’m sure someone somewhere (google it, I just got back from evacuation) has pointed out that the only imaginable reason a black majority would harass and terrorize a White minority at the Superdome while a White majority coexists quite peacefully with black and latino minorities at the Q is, of course, racism. What other reason can you think of racist? As Descartes might say if he were alive in these times of mass delusion: I think therefore I am a racist.

Last but not least, and I’m sure my long-suffering cricket-readers will be very surprised, this holocaust got me thinking about the immigration invasion. As with 9/11, when the entire commercial air fleet was grounded for days, we see that much of what is considered unthinkable or undoable according to conventional wisdom is in fact quite thinkable and doable. The speed with which our government was able to get hundreds of thousands of people in heavily populated areas to "migrate" elsewhere, even though it inconvenienced and terrified many more who were not directly involved, certainly puts the lie to all the ninnies who claim we are incapable of deporting the millions of invaders, have no right to even make them fearful, and darn sure better not inconvenience the Holy Economy with any such attempt.

In evacuated areas police and guardsmen are stopping people and asking for ID! Oh my. Civil libertarians around the world must be wetting themselves. Can you imagine the sheer INJUSTICE, the TERROR this must instill?

I can’t. All I can think is: see, it’s easy. And how safe we all are with only people who live in our own neighborhoods being allowed in. All we have to do to catch and evict 80% of the invaders is have everyone pin on their driver’s license for a few weeks and arrest anyone who isn’t wearing one. The other 20% are even easier – they’re already in jail. It is, I must humbly point out, only to thwart this simple but brilliant plan that Spitzer does what he does. By the way, did you know he’s a Jew?

We see at times like this that law enforcers don’t abide looters and they certainly can do something about them. Too bad the traditional orders to shoot on sight have fallen out of favor. We can be sure the many side effects of our new anything-goes scofflaw norm is that whenever disaster strikes sociopaths nearly chuckle themselves to death with glee. "Rest assured," we are told, "the authorities will come down on them with the full force of the law." Translation to invaderese: "fill your truck homey."

Even limp-wristed promises of enforcement are however enough to cause cognitive dissonance, which is why the authorities are so uncomfortable talking about looting. They, even more so than any of the rest of us, must be thinking to themselves: why is it ok to crackdown on lawlessness now, to forbid people from moving freely, shut down massive interstate freeways, to even keep people out of their homes, but when things are calm and "normal" we must endure invaders looting our social services and preying on us as if we are stupid defenseless sheep? Why pretend there is no way we can tell who anybody is or where they belong when we so obviously can and do, at least some of the time? If the bureaucrats think too hard they might actually realize they swore an oath to uphold the law and protect their constituents at all times, not just during the occasional natural crisis.

Yesterday Chertoff provided a good example of what I’m talking about. I wish someone had posted it online but I can’t find it. Anyway, imagine the minefield of contradictions he had to tiptoe through to describe how pulling guardsmen off the border wasn’t going to impact our security because he had talked to Mexican authorities and advised them it wouldn’t be a good idea to send people across the border for the next few days. What with all the fires down there and stuff. Por favor?

Mass deportation is unthinkable? Undoable? Yes, if you’re used to pretending there’s no way we can do anything about the millions of invaders then you certainly aren’t thinking. Or perhaps you’re just spending all your time thinking about sneaky ways to serve the invaders rather than We the People.

Update 24 Oct 2007: Well it isn’t all roses at the Q. Here’s a story from Immigration Watchdog about invaders doing what they do best. Taking. "Take what you need" translated to invaderese means "take it by the truckload and sell it until the police stop you". But of course the problems didn’t start until ICE was forced to do their job because the invaders were too brazen (or stupid) to lie about their status. Really, you should see these pathetic invader baby makers tell their sob story. They were caught, they returned the last truckload, no problemo!

Update 25 Oct 2007: Two online stories related to those linked above. The comments sections reflect the absolutely fed-up mood of Americans, whether toward our treasonous Senate’s undying NIGHTMARE Acts, or toward the invader parasites and our PC-addled ICE agents. It really is encouraging to see so many people have rejected the media’s brainwashing. Next step, wipe the viral infection and reboot.