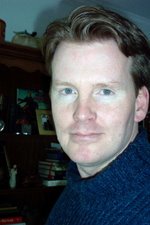 Via John Robb on Tribalism at The Occidental Quarterly I followed a link to Robb’s blog Global Guerrillas where he focuses on:

Here’s his About page.

I’m not sure what to make of Robb, but here’s what I think so far. His analysis of globalism is broad, incisive, and critical, and comes from a technologically informed point of view outside the false dichotomy of partisan politics. He provides interesting opinions and links, though his writing is larded with jargon. Only cryptically, by reading between the lines, can he be understood to recognize the tribal jewish influence that so dominates the West’s politics, finance, and media. He seems a typical deracinated White, for whom even a keen interest in tribalism and communities and opposition to globalism appears not at all motivated by an overt awareness of or sympathy for his own tribe.

We are now engaged in a conflict that will dictate whether we succeed or fail in the 21st century. Our adversary in this conflict is, in short, the threat posed by globalization.

and concludes (my emphasis):

Disruptions that result in societal and economic chaos occur most readily in societies where the health and vigor of a society has decayed. In other words, the social and economic system that the nation-state administers must be seen as fair and just, and it must deliver tangible results to the greatest number of people possible. Anything less than this and societal breakdown becomes extremely likely should disruption occur, since the allure of participation in oppositional groups, from black-market crime to guerrilla/terrorist groups, will outweigh outcomes available through participation in the status quo. In short, the nation-state will lose its legitimacy with large subsets of its population.

Here’s an example of not delivering results: The incomes of the bottom four-fifths of Americans have fallen 10 percent, adjusted for inflation, over the last three decades, despite massive improvements in worker productivity. For an example of not being just and fair, we need not go far: Self-dealing financial elites defrauded markets and the government of trillions of dollars realized during the 2008 financial panic, and not one of them went to jail.

In order to retain legitimacy at a level that allows some freedom of action, the government must endeavor to deliver real economic progress to its constituents. That means that every policy should be slaved to increasing incomes in line with increases in worker productivity, and improving the long-term financial wealth of the greatest number. (The best way to measure the success of government efforts in this regard are increases in the median incomes of individuals.) One method of achieving this, already mentioned above, is to remove barriers to community resilience. Community resilience has the potential to substantially improve the incomes and quality of life for the greatest number by reducing end-user costs, creating jobs, and spurring massive leaps in innovation.

The greatest threat to achieving this outcome lies in the potential for parasitic interests to gain control of government function, since one of the quickest routes to illegitimacy is through the appearance of corruption. This unfortunate outcome was evident in the 2008 financial meltdown, as special interests proved capable of snaring trillions in subsidies from the public treasure for no apparent improvement in the lives of most citizens.

Robb’s analysis is clouded by his conflation of both pro-globalist “self-dealing financial elite” tribalists and anti-globalist al-qaeda-like tribalists (mentioned earlier in his essay) as “parasitic interests”. While Robb sees the jihadi threat clearly enough he seems unwilling or unable to confront the implications of his own analysis regarding the “parasitic interests” who control finance and drive globalism. That their fraud going unpunished implies not the potential to gain control of government function, but that they have already gained it. That this control goes unheralded and uncriticized in the mainstream media implies that the “parasitic interests” also effectively control media function.

The “parasitic interests” who illegitimately control the Eurosphere’s government, finance, and media have made it clear that their most feared and detested enemies are White tribalists. For us repression and punishment are considered normal and deserved, especially in response to opposition to the “parasitic interests” whose genocidal immigration policies are swamping our homelands with hostile non-White tribalists.

UPDATE 16 July 2009: A bit more of Robb’s essay Containing Chaos is available at The Occidental Quarterly Online, including this paragraph:

News in the age of the global supernetwork is often startling. It features an endless procession of crushing financial panics, unexpected food shortages, sharp commodity price spikes, brazen terrorist attacks that have shut down major cities from New York to Sao Paulo to Mumbai, and much more. These extreme events form a pattern of behavior that should serve as an alarm. They are an indication that the system we have come to rely upon, the global supernetwork that connects us to each other and all manner of goods and services is entering a period of extreme turbulence, where we careen from crisis to crisis at an increasing rate and incremental severity. At worst, it may even be an indication of a looming catastrophic failure of indeterminable duration.