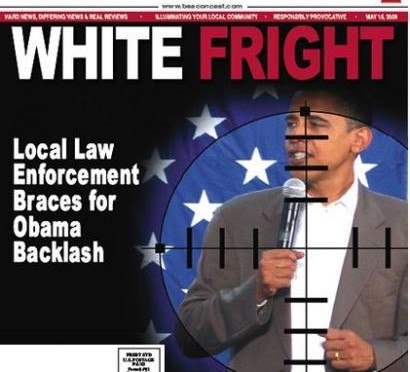 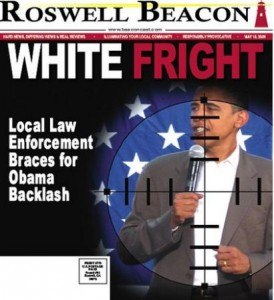 Are you feeling marginalized, cheated, or otherwise oppressed? Disturbed by abortion? Angry about the current economic and political climate? Upset about millions of illegal immigrants our government won’t arrest or deport? If you said yes to any of these questions and you’re White then be advised that the Department of Homeland Security considers you a potential enemy of the state.

The DHS/Office of Intelligence and Analysis (I&A) has no specific information that domestic rightwing* terrorists are currently planning acts of violence, but rightwing extremists may be gaining new recruits by playing on their fears about several emergent issues. The economic downturn and the election of the first African American president present unique drivers for rightwing radicalization and recruitment.

Rightwing extremists have capitalized on the election of the first African American president, and are focusing their efforts to recruit new members, mobilize existing supporters, and broaden their scope and appeal through propaganda, but they have not yet turned to attack planning.

Note that “rightwing extremists” are being accused of reacting to actual facts and events, while the writers of this report are the ones “playing on fears”. This report is a perfect example of propaganda. It not only demonizes an opposing cause, it does so by inverting reality.

* Rightwing extremism in the United States can be broadly divided into those groups, movements, and adherents that are primarily hate-oriented (based on hatred of particular religious, racial or ethnic groups), and those that are mainly antigovernment, rejecting federal authority in favor of state or local authority, or rejecting government authority entirely. It may include groups and individuals that are dedicated to a single issue, such as opposition to abortion or immigration.

This is the footnote many media reports have focused on.

Note that the hate rhetoric is another inversion. The effect of this report, if not its desired purpose, is to fuel ill will towards Whites who are reacting to what we perceive as aggression and dispossession.
The “rightwing extremist” and “white supremacist” smears used to describe the disparate and well-intentioned people who favor state or local authority or oppose abortion or immigration reveals the report writers’ hypocritical hatred of even the weakest and most disjoint expressions of racial/religious self-interest from a particular racial/religious group: White Christians.

The report specifically targets and deliberately pathologizes Whites who are disturbed by anything we consider harmful to our interests.

Proposed imposition of firearms restrictions and weapons bans likely would attract new members into the ranks of rightwing extremist groups, as well as potentially spur some of them to begin planning and training for violence against the government. The high volume of purchases and stockpiling of weapons and ammunition by rightwing extremists in anticipation of restrictions and bans in some parts of the country continue to be a primary concern to law enforcement.

The founders of our country clearly trusted in and recognized the value of a well-armed citizenry and unambiguously expressed these beliefs in the 2nd amendment. Those who propose the imposition of firearms restrictions and weapons bans without amending the constitution are the extremists.

A recent example of the potential violence associated with a rise in rightwing extremism may be found in the shooting deaths of three police officers in Pittsburgh, Pennsylvania, on 4 April 2009. The alleged gunman’s reaction reportedly was influenced by his racist ideology and belief in antigovernment conspiracy theories related to gun confiscations, citizen detention camps, and a Jewish-controlled “one world government.”

Note that this report is not only specifically antagonistic toward Whites acting in our own defense, it is also specifically sympathetic to jews.

Rightwing extremist chatter on the Internet continues to focus on the economy, the perceived loss of U.S. jobs in the manufacturing and construction sectors, and home foreclosures. Anti-Semitic extremists attribute these losses to a deliberate conspiracy conducted by a cabal of Jewish “financial elites.” These “accusatory” tactics are employed to draw new recruits into rightwing extremist groups and further radicalize those already subscribing to extremist beliefs. DHS/I&A assesses this trend is likely to accelerate if the economy is perceived to worsen.

The chain of causation is reversed. The very real foreclosures and loss of jobs fuels the perceived disastrous costs of the globalist, materialist, consumerist pyramid scheme euphemistically referred to as “the economy”.

The writers of this report are so keen to protect “financial elites” (and specifically jews) who have perpetrated fraud that they use the very accusatory tactics they decry to direct blame and hate instead onto what they imagine is deliberate conspiracy conducted by a cabal of admittedly powerless “rightwing extremist groups”.

Once again the word “perceived” marks an inversion.

Whites were the most evenly split racial group in the presidential election. The more lopsided votes of every other group are justifiably understood to reflect antagonism toward Whites because the new presidential administration’s support for immigration is in fact reducing Whites to a minority. The new presidential administration has and continues to capitalize on related racial and political prejudices against Whites – this report being a prime example.

Paralleling the current national climate, rightwing extremists during the 1990s exploited a variety of social issues and political themes to increase group visibility and recruit new members. Prominent among these themes were the militia movement’s opposition to gun control efforts, criticism of free trade agreements (particularly those with Mexico), and highlighting perceived government infringement on civil liberties as well as white supremacists’ longstanding exploitation of social issues such as abortion, inter-racial crimes, and same-sex marriage. During the 1990s, these issues contributed to the growth in the number of domestic rightwing terrorist and extremist groups and an increase in violent acts targeting government facilities, law enforcement officers, banks, and infrastructure sectors.

Some Whites recognize and complain about the unrelenting assault on our social and political interests and try to defend them. In this defense we constantly face smooth-talking dishonest aggressors just like the people who wrote this DHS report. This fills some Whites with frustration and despair, and they react violently. Then we’re all smeared as “extremists” and the violent reactions are exploited, even decades later, to justify and continue the assault against us. This report again provides a prime example. In seven pages of text Timothy McVeigh and the Oklahoma City bombing are mentioned three times.

Historically, domestic rightwing extremists have feared, predicted, and anticipated a cataclysmic economic collapse in the United States. Prominent antigovernment conspiracy theorists have incorporated aspects of an impending economic collapse to intensify fear and paranoia among like-minded individuals and to attract recruits during times of economic uncertainty. Conspiracy theories involving declarations of martial law, impending civil strife or racial conflict, suspension of the U.S. Constitution, and the creation of citizen detention camps often incorporate aspects of a failed economy. Antigovernment conspiracy theories and “end times” prophecies could motivate extremist individuals and groups to stockpile food, ammunition, and weapons. These teachings also have been linked with the radicalization of domestic extremist individuals and groups in the past, such as violent Christian Identity organizations and extremist members of the militia movement.

Over the past five years, various rightwing extremists, including militias and white supremacists, have adopted the immigration issue as a call to action, rallying point, and recruiting tool. Debates over appropriate immigration levels and enforcement policy generally fall within the realm of protected political speech under the First Amendment, but in some cases, anti-immigration or strident pro-enforcement fervor has been directed against specific groups and has the potential to turn violent.

The constitution describes the political structure of a government. The fear that this structure has been subverted and illegitimately replaced with what amounts to a new kind of government is based on the very real evidence (the report we’re examining here for example) that the current government and its defense is based primarily on economics. In addition, the writers of this report are clearly antipathetic to the constitutional principles codified in the 1st and 2nd amendments. Their strident fervor is directed specifically against Whites who would defend and uphold the constitution.

Rightwing extremist paranoia of foreign regimes could escalate or be magnified in the event of an economic crisis or military confrontation, harkening back to the “New World Order” conspiracy theories of the 1990s.

The report writers seem to resent that theories with predictive value are naturally magnified. They present no evidence to substantiate their paranoid theories concerning “rightwing extremist paranoia of foreign regimes”. The bulk of their report makes the case that “rightwing extremists” are most concerned about the domestic regime.

— (U//LES) DHS/I&A has concluded that white supremacist lone wolves pose the most significant domestic terrorist threat because of their low profile and autonomy—separate from any formalized group—which hampers warning efforts.

— (U//FOUO) Similarly, recent state and municipal law enforcement reporting has warned of the dangers of rightwing extremists embracing the tactics of “leaderless resistance” and of lone wolves carrying out acts of violence.

Note that the biggest threat they perceive to the deliberately organized and government-supported demonization, disarming, and dispossession of Whites is the disorganized resistance of individual Whites acting independently. The moral: native Whites who conclude that our current government is acting against our interests are by this very act justifying the government to work that much harder against us. Regardless of what they might think or do however, immigrants and financial elites can rest assured that the government is actively defending their interests.

A prominent civil rights organization reported in 2006 that “large numbers of potentially violent neo-Nazis, skinheads, and other white supremacists are now learning the art of warfare in the [U.S.] armed forces.”

The “prominent civil rights organization” is not specified, but the source of the quote indicates that it is actually an anti-White-rights group.

“Because hate group membership and extremist activity are antithetical to the values and mission of our armed forces, we urge you to adopt a zero-tolerance policy when it comes to white supremacy in the military and to take all necessary steps to ensure that the policy is rigorously enforced,” Cohen wrote in a letter to Rumsfeld.

Zero tolerance for Whites pretty much sums up the hate-oriented nature of the domestic terrorists who have insinuated themselves and their anti-White ideas into the very highest levels of our government.

17 thoughts on “DHS Hypocrites Direct Fear and Hatred Toward Whites”