The video above is part of a CNSNews article, DNC Chair: Republicans Believe Illegal Immigration ‘Should be a Crime’, 31 May 2011. It quotes Wasserman Schultz spouting the usual apologia in favor of genocidal levels of immigration into the US:

“We have 12 million undocumented immigrants in this country that are part of the backbone of our economy and this is not only a reality but a necessity,” she said. “And that it would be harmful–the Republican solution that I’ve seen in the last three years is that we should just pack them all up and ship them back to their own countries and that in fact it should be a crime and we should arrested them all.”

12 million? The backbone of our economy? The Republican solution is arresting them all? Political views don’t get much more detached from reality than this. And this is not some random US congresswoman. Wasserman Schultz leads one of the two major political parties.

The second half of the video starts with a question about a disagreement at a meeting which took place a few days earlier. Note that this question triggers a far more impassioned response:

Question: The Republican Jewish Coalition head was reported in the New York Times – Matt Brooks is saying that you were proposing a gag order on this subject.

Wasserman Schultz: Ha ha, yeah, well, uh, you know I take… one of the most tremendous sources of pride for me is that I am the first jewish woman to represent the state of Florida in Congress. And, ah, another tremendous source of pride for me is that I am a pro-Israel jewish member of Congress and I proudly support a president that is pro-Israel. Um. What I think is unfortunate and what I suggested, along with others, including members of the Republican Jewish Coalition that are not the executive director of that organization, um, is that we need to make sure, like AIPAC pushes for, like Jewish Federation pushes for, like ADL and every major jewish organization pushes for in this country, we need to make sure that Israel never becomes a partisan issue. And that’s what we talked about in that meeting.

The top official at a Republican Jewish group blasted Democratic National Committee Chairwoman Debbie Wasserman Schultz for an “unprecedented and inappropriate” effort to quell partisan debate over Israel in a private meeting with Prime Minister Benjamin Netanyahu yesterday at which both were present.

Republican Jewish Coalition Executive Director Matt Brooks clashed with Wasserman Schultz, as I reported yesterday, after Wasserman Schultz called for partisan unity on matters of Israel policy and Brooks – whose group had criticized her for speaking before the liberal group J Street – responded that he reserved the right to attack Democrats who stray from a hawkish pro-Israel line.

Another take on the interview and the disagreement – DNC chair argues Obama isn’t losing support of Jewish voters, Los Angeles Times, 26 May 2011:

The South Florida Democrat laughed at charges leveled by the head of a Republican Jewish group that she wanted to squelch partisan criticism over Israel. Matt Brooks, executive director of the Republican Jewish Coalition, accused Wasserman Schultz of proposing a “gag order” on criticism about Israeli policy when they and others met privately with Netanyahu this week.

“We need to make sure that Israel never becomes a partisan issue, and that’s what we talked about in that meeting,” Wasserman Schultz said. She quoted Netanyahu as saying, at the end of the meeting, that when it comes to Israel, “we need to erase the aisle” between Democrats and Republicans. 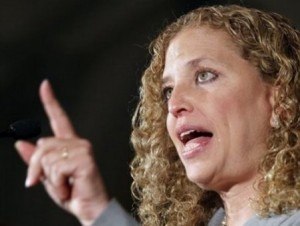 The congresswoman is beloved by the Democratic rank and file for her aggressive, outspoken advocacy for liberal points of view. She’s frequently deployed as a surrogate, particularly to groups of women and Jewish voters.

Ms. Wasserman Schultz is known inside the party for her strong fund-raising abilities, and she represents South Florida, which will be a critical battleground in the 2012 presidential race.

Some background on Matthew Brooks:

Matthew Brooks serves as Executive Director of both the Republican Jewish Coalition, an organization dedicated to enhancing ties between the Jewish community and the Republican Party, and the Jewish Policy Center, a think-tank that examines public policy from a Jewish perspective.

Matt began his political career as State Chairman of the Massachusetts College Republicans while still an undergraduate at Brandeis University in Waltham, MA. Matt managed the Jack Kemp for President campaign in Massachusetts, as well as directed projects in New Hampshire and New England. Matt became the Political Director of the Republican Jewish Coalition in 1988. Taking a leave of absence from the RJC, Matt served as the National Field Director for Victory ‘88 Jewish Campaign Committee, designing and implementing campaign strategy on behalf of the Bush-Quayle ‘88 campaign. Matt was appointed Executive Director of the RJC in 1990.

Matt was twice selected (in 2006 and 2008) by the Jewish Forward as one of the 50 most influential Jews in America.

In addition to his duties leading the RJC, Matt also serves as the organization’s principal spokesman. In this role Matt has been a frequent guest on CNN, Fox News, MSNBC and has been quoted extensively in publications such as the New York Times, Washington Post, Wall Street Journal and other major newspapers.

One of the many consequences of jewish influence in media and academia is that the perfectly descriptive term Zionist Occupation Government is painted as “an antisemitic conspiracy theory”. Yet, the jewish conspiracy is right out in the open. Erase the aisle. Israel first, party second. This is the state of US politics today.

What we see here is a disagreement between hyper-ethnocentric jews who hold positions of great power and have strong influence over the US government. What they care about most is what’s best for the jewish ethnostate of Israel. They all agree that in US politics the interests of Israel should always come first, across the board, for everyone, not just jews. The big question for them is whether to continue imposing this the usual stealthy judeo-liberal way, or the usual in-your-face judeo-conservative way.

16 thoughts on “A Disagreement About Who is Firstest”