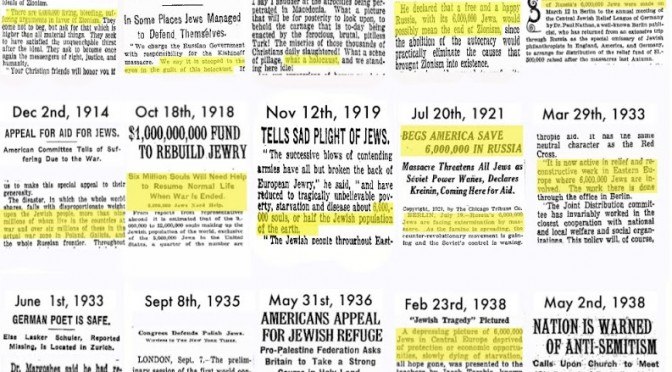 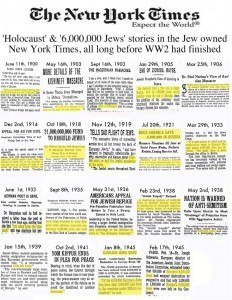 The internet really is a wonder. Here’s a fascinating image I ran into on the internet. Using the New York Times search engine I was able to verify most of the dates and text. Links to all of the articles are presented in order below, along with links to free PDF downloads where they were available.

MORE DETAILS OF THE KISHINEFF MASSACRE – In Some Places Jews Managed to Defend Themselves. The Jewish Chronicle, of London, Charges the Russian Government with Responsibility for the Outrages. – Front Page – NYTimes.com, PDF

What Maxim Gorky is Doing in Berlin – Article – NYTimes.com, PDF (with another article)

SLINGSBY CASE UP TODAY. – Legitimacy Contest Likely to be One of Longest Suits on Record. – Editorial – NYTimes.com, PDF

ALDERMEN VOTE HITLER PROTEST – Board Calls on Washington to Take Persecutions Up With German Authorities. APPEAL FOR FUNDS MADE Meeting to Plan Relief Program Called by Joint Distribution Group for Sunday. – Article – NYTimes.com

AMERICANS APPEAL FOR JEWISH REFUGE – Pro-Palestine Federation Asks Britain to Take a Strong Course in Holy Land. AIMS OF MANDATE CITED Petition Urges It Be Made Clear to ‘Turbulent Element’ That These Will Be Carried Out. – Article – NYTimes.com

NATION IS WARNED OF ANTI-SEMITISM – Dr. Hoffmann Is Fearful That Persecutions Abroad, May Spread to This Country SEES INTOLERANCE RISING Calls Upon Church to Meet ‘Challenge’ of Prejudice Here With Aggressive Action – Article – NYTimes.com

Schwartz Says Only 1,500,000 Jews Are Left In Europe as Result of German Murders – Article – NYTimes.com

I did not pay to download the more recent PDFs. From the ones I did examine it seems that whoever created the image cut and pasted and highlighted certain portions of the Times’ PDFs, but otherwise faithfully reproduced the contents. Long story short, the information in the image appears legitimate.

I think this is an invaluable image. For instance, it helps put the following article, just published by the Times on 14 February 2012, in proper context.

Study of the Holocaust Sees Growing Demand Among Overseas Visitors:

Seven decades after the Holocaust, with its survivors rapidly dying, the most systematic slaughter in human history is taking on a growing and often unexpected role in education across the globe. Yad Vashem alone, which opened its international teaching branch only in the 1990s, produces material in more than 20 languages, is active in 55 countries and puts on 70 seminars a year for groups of visiting educators.

And while many believe that to make a universal point it is important to teach the Holocaust in the context of other genocides — in Rwanda, Armenia and Cambodia — the trend at Yad Vashem is the opposite, going more deeply into the human details of the slaughter of six million Jews — most of them grim, some uplifting.

“We live in an era when young people know little and have big opinions,” said Dorit Novak, director of Yad Vashem’s International School for Holocaust Studies. “The Nazi regime wanted to erase any trace of the Jewish people. If you don’t understand that, you can’t understand the event. But paradoxically the more you delve into the facts and the particulars, the less uniquely Jewish and more universal it gets.”

Despite an ever more universal gloss on the Holocaust abroad, here in Israel there is concern among liberals that it has taken on too big a role in the national narrative, leading to a mentality of victimhood and siege.

A poll of Israeli Jews in 2009 found the only issue on which there was near-universal agreement was the need to remember the Holocaust. Citing that poll, Merav Michaeli, a columnist for the newspaper Haaretz, complained that “the Holocaust is the sole prism through which our leadership, followed by society at large, examines every situation.” She added that the way many Israelis view world events, “all our lives are simply one long Shoah.”

This was also the point made by Avraham Burg, a former speaker of Parliament, in his book, “The Holocaust is Over; We Must Rise from Its Ashes.”

He urged that on the campus of Yad Vashem there should be built an international court of crimes against humanity, adding: “Israel must leave Auschwitz, because Auschwitz is a mental prison. Life inside the camp is survival laced with guilt and victimology.”

Mr. Shalev, the Yad Vashem chairman, said the Holocaust should not be the sole source of Israel’s definition of itself. Still, he said, it was clearly an important element, adding: “The Holocaust does, in some way, hold our identity together. At the same time, the buildup of interest in the Holocaust around the world has created a growing awareness of genocide generally, and we have an important role to play in that.”

The Taiwanese studying here agreed. They said they would take home lessons they would apply to discrimination and even bullying on their campuses.

Mr. Paz Alcalde, the Spanish teacher, said he, too, believed that studying the details of one particular set of events was the best way for a larger point to emerge.

“I don’t see any dichotomy between the particular and the universal,” he said. “The history of the Holocaust is a history of real individuals and families, people with birthdays and dreams. Once you get to know them, their story becomes your story.”

Indeed. For more than a hundred years jews have been trying to displace our story with their own, making all our lives simply one long holocaust narrative.