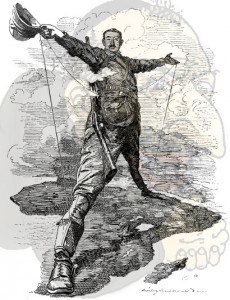 The significance of the bone of contention over jewish rule of Britain first came to my attention in Majority Rights Radio: Guessedworker speaks with Tanstaafl, and especially in the comments at MR afterward. Months later I came across the issue again in Yockey on Culture and Race – Part 8 and Part 9.

The “British” Empire is one of those elements of European history which resonates very strongly in the European psyche. Racialists tend to see it as an expression of Anglo-Saxon greatness. The jews have turned it into a cornerstone of their guilt-tripping about colonialism. Neither view accords with reality. The jews puppeteered the empire at the expense of Britons, just as today they puppeteer the colonization of Britain itself.

Evola’s assessment, excerpted below, was written in 1940, at which point jewish parasitic infiltration and manipulation of Britain (from the top) was clear enough. Evola’s discussion of the precise who and how provides a welcome contrast to Yockey’s jew-blind account in 1948. Indeed, the false notion that Britons ruled Britain then, and even now, prevails exactly because the jews still rule.

Disraeli the Jew and the Empire of the Shopkeepers:

We know that, wherever economic interests predominate, the Jew rapidly rises and accedes to the commanding positions. The penetration of Judaism into England is not a thing of recent days alone. It was the English Revolution and Protestantism which threw open England’s doors. The Jews, who had been expelled by Edward I in 1290, were readmitted to England as a result of a Petition accepted by Cromwell and finally approved by Charles II in 1649. From this time forward, the Jews, and above all the Spanish Jews (the Sephardim) began to immigrate en masse to England, bringing with them the riches which they had acquired by more or less dubious means, and it was these riches, as we have just explained, which allowed them to accede to the centres of command within English life, to the aristocracy and to positions very close to the Crown. Less than a century after their re-admission, the Jews were so sure of themselves that they demanded to be naturalised, that is to say, to be granted British citizenship. This had a very interesting result : the Law, or Bill, naturalising the Jews was approved in 1740. Most of its supporters were members of the upper classes or high dignitaries within the Protestant Church, which shows us the extent to which these elements had already become Judaised or corrupted by Jewish gold. The reaction came not from the English upper classes, but from the people. The Law of 1740 provoked such outrage and disorder among the populace that it was abrogated in 1753.

The Jews now resorted to another tactic : they abandoned their synagogues and converted, nominally, to Christianity. Thus the obstacle was circumvented and their work of penetration proceeded at an accelerated pace. What mattered to the Jews was to keep their positions of command and to eliminate the religious arguments on which the opposition of that period principally rested ; everything else was secondary, since the converted Jew remains, in his instincts, his mentality, and his manner of action, entirely Jewish, as is shown by one striking example among many others : the extremely influential Jewish banker Sampson Gideon, despite having converted, continued to support the Jewish community and was buried in a Jewish cemetery. His money bought for his son an enormous property and the title of Baronet.

This was the preferred tactic of the rich Jews of England from the eighteenth century on : they supplanted the English feudal nobility by acquiring their properties and titles, and thus mixing themselves with the aristocracy, by the nature of the British representative system, they came closer and closer to the government, with the natural consequence of a progressive Judaification of the English political mentality.

from the inception of imperialism on the large scale, what was less apparent was that the ‘British Empire’ was a creature of Judaism, which a Jew had given as a present to the British Royal Crown.

Only one Jew could have conceived the idea of ‘reforming’ the conception of Empire and making of it something plutocratic and transforming it into imperialistic materialism. This Jew was Disraeli – ‘Dizzy’ as he was known. It was he who made of Queen Victoria an ‘Empress’, a colonial Empress, the Empress of India. This indefatigable proponent of the English ‘Imperial’ idea modelled his conception upon the Jewish Messianic-imperial idea, the idea of a people whose power consists in the riches of others, over which they take power, and which they cynically exploit and control. Disraeli always attacked very violently those who wished to separate England from her overseas territories, within which, as a Jewish historian has pointed out, Jews were the pioneers. Disraeli knew who it was that sustained this England which in turn was to dominate the riches of the world ; it is possible that he was among those initiates who knew that it was more than a simple British-Jewish plutocracy which was pulling the strings. One recalls those often-quoted words of Disraeli : “The world is governed by very different personages from what is imagined by those who are not behind the scenes.”

The prudent and noiseless penetration of Jewry into the English upper classes and into the government itself continued. It was Disraeli who performed the coup upon Egypt in 1875 – with whose help? Rothschild. In 1875, the Khedive had financial worries and Disraeli managed to learn that he was willing to sell 177,000 shares of Suez Canal stock. This was a magnificent opportunity to gain certain control of the route to the Indies. The government hesitated. Rothschild did not. Here is the record of the historic conversation between Disraeli and Rothschild (Disraeli had asked him for four million pounds sterling) : “What guarantee can you offer me?” “The British government.” “You shall have five million tomorrow.” The interest on the loan was ‘extremely low’ ; naturally, the real and important interest of the Jewish clique lay on another and less visible plane …

Disraeli did not fail to make more convenient to the Jews of England their ritual observance. A little-known fact is that the ‘English Saturday’ is nothing other than the Jewish Sabbath, the ritual day of rest of the Jews. It was suitably Disraeli who introduced it to England, under an adequate social pretext.

Thus, as the Judaification of old feudal England was accomplished by diverse means, and as the old aristocracy gradually decomposed and underwent inoculation with ideas which would make it an easy prey for the material and spiritual influences of Judaism and Freemasonry, Disraeli did not forget his other task, that of augmenting and reinforcing the power of the new ‘Empire of Shopkeepers’, the new ‘Imperial Venice’, the reborn Israel of the Promise. This he did in a manner which was just as characteristically Jewish. Disraeli was one of the principal instigators of that sad and cynical English foreign policy by means of ‘protected’ third parties and the use of blackmail, which it pushes to the most extreme consequences. The most striking case is that of the Russo-Turkish War. Disraeli did not hesitate to betray the ancient cause of European solidarity, by placing Turkey under British protection. Turkey, defeated, was saved by Britain ; by use of the well-known ‘English’ method of threats and sanctions, Disraeli was able to paralyse the Slavic advance to the South without a single shot being fired, and a grateful Turkey made him a present of Cyprus. At the Congress of Berlin, the Russian ambassador, Gortshakov, was unable to restrain himself from crying dolorously : “To have sacrificed a hundred thousand soldiers and a hundred million of money, and for nothing!” (*) There is a factor even more serious, from a higher point of view. By virtue of this situation, brought about by Disraeli, Turkey was admitted into the community of the European nations protected by so-called ‘International Justice’. We say ‘so-called’ because, until that time, far from being held to be valid for all the peoples of the world, this justice was held to be valid uniquely among the group of the European nations ; it was a form of recourse and of internal law for Europeans. With the admission of Turkey, a new phase of international law began, and this was truly the phase in which ‘justice’ became a mask and its ‘international’ character became a ruse of ‘democracy’, for it was simply an instrument in the service of Anglo-Jewry, and subsequently of the French also. This development led to the League of Nations, to crisis, and to actual war.

UPDATE 20 Sep 2018: The original link from which the excerpts above were taken is down. The new link says this about the original source:

‘L’Ebreo Disraeli e la costruzione dell’impero dei mercanti’ (‘Disraeli the Jew and the Empire of the Shopkeepers’) was published in September 1940 in Vita Italiana. Like the two other articles by Evola on Judaism which appear on this site, it is also included in the anthology ‘Il “Genio d’Israele” – L’Azione distruttrice dell’Ebraismo’ (‘The Genius of Israel – The Destructive Action of Hebraism’) (Il Cinabro, 1992).

15 thoughts on “Julius Evola: “the ‘British Empire’ was a creature of Judaism””