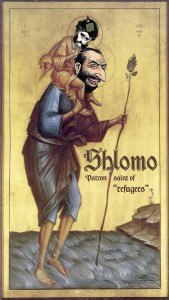 On Friday Trump ordered a suspension of entry by aliens from certain countries for 90 days, entry by alien “refugees” for 120 days, and entry specifically from Syria indefinitely – proclaiming that such alien entry “would be detrimental to the interests of the United States”.

Even before this executive order was announced jews were screeching that Trump and other kikeservatives had neglected to sufficiently emphasize the jew-first moral of their WWII narrative. The screeching intensified with jews big and small slithering forth to jewsplain how Trump’s order threatened their sensibilities and interests as jews.

Beside the condemnations issued by organized jewry, social media was also full of individual jews directly invoking their muh six million narrative in support of their muh refugees agenda. The general thrust of the argument: It is irrational and immoral for you goyim to defend yourself from detrimental aliens, because that might be bad for the jews.

As one particularly noxious little jew, Lucas Neff, put it: “When you say ONLY Muslim countries, it is the exact same as saying it’s ONLY the Jews. Do you not get it??? Do you honestly not get it??” And: “I keep seeing ppl breathe a sigh of relief and say: “It’s ONLY Muslims countries. Not us.” AS A JEW, AS A HUMAN, I WANT TO SCREAM.” A few days earlier the scream was: “My wife is a permanent resident w a green card. Fuck u for voting 4 him. I do not forgive u. I will never forgive u.”

Julia Ioffe: “I have to say: My family came here as refugees. You’ll never meet prouder Americans, or know how much this breaks my heart.”

David Rothkopf: “My father, his family came here as refugees too. If yours did, say so…let others understand how core that is to our country’s greatness.”

David Rothkopf: “Someone needs to take Trump to the Statue of Liberty and let him read the words at its base. They’re what make America great.”

(In the process of deconstructing America jews like to pretend their toxic tribemate Emma Lazarus was a Founding Father and her bit of doggerel praising “wretched refuse” should be treated like the Zeroth Amendment.)

At times there was even some lame pushback from alt-jews.

Seth Barron: “Trump reduced the number of Muslims who can come to the US in the next 90 days from 1.5 to 1.3 billion. #Holocaust #EmmaLazarusWept”

Will Saletan: “So no worries if we were to ban, say, just the Jews from countries that are populated by some violent Jewish extremists, right?”

Steve Sailer: “What hysteria over “Islamophobia” is mostly about is Jewish paranoia over completely hypothetical anti-Semitic persecution.”

Will Saletan: “Yes. So hypothetical. http://auschwitz.org/en/”

Steve Sailer: “Perfect illustration of my point: America can’t have a pro-American immigration policy because Auschwitz.”

In fact the jew agenda to destroy White America was already in motion well before WWII. America can’t have a pro-American immigration policy for the same reason American political discourse consists of so much screeching about “nazis” and “the holocaust”.