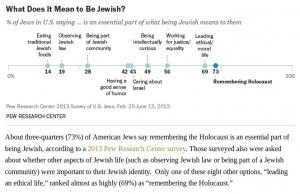 Under jew rule every day is holocaust day, but some days are more holocausty than others.

Seven decades after WWII, references to “holocaust” (and Hitler, and “nazi”) are more common than ever in the jewsmedia. Because jews – because it is the jewsmedia, because the current regime is so thoroughly jewed, because the jews won that war.

Jews lie, Whites die. This was true even before that war, but it is so much more obviously the case ever since. And the jews are increasingly willing and able to criminalize saying so.

The post-war regime’s indoctrination has been so pervasive for so long that even non-jews in the most powerful positions have internalized and mindlessly regurgitate the jew narrative. What that regime says about race and jews and supremacism and privilege is completely contradicted by who it permits to say what about whom, and how they behave when it’s said.

The result is a clown world, a pro-jew/anti-White bagel republic in which the government’s primary function is to combat “racism” and “anti-semitism”, which in effect means protecting the wealthy hyper-screechy jews at the tippity top from the White masses who literally worship an imaginary dead jew, and who voted for a lifelong shyster who, like jews, literally worships “the jewish people”. And of course the real danger in this situation, because it might be bad for the jews, is that at any moment any of these non-jews might suddenly start singling out and hating the jews for no good reason whatsoever!

It seems like only yesterday that Sean Spicer, the new kikeservative-in-chief’s spokesman, tried to justify an act of war against one of the jew state’s neighbors by moralizing in terms of Hitler and gas. Tellingly the jewsmedia echo chamber was scandalized not so much by the act of war as it was by their own absurd notion that, once again, devious White nationalists in the White House had tried to bring about annuda shoah by writing the jews out of their own weaponized narrative.

The scene jews made about Spicer’s Hitler comparison was characteristically schizophrenic. An unthinkable sacrilege, insisted the jews, and at the same time hilarious. How dare you think gassing has anything to do with Hitler! How dare you think of Hitler and NOT think of the jews! How dare anyone imagine jews aren’t Germans! Don’t you know that’s what Hitler did, which is the worst crime ever because the jews aren’t Germans! This “neo-nazi” thought he could invoke Hitler, lol, look how scared out of his mind this thug is now, lol. Oy vey, lol.

U.S. President Donald Trump said anti-Semitism should be defeated and called the Holocaust the “darkest chapter of human history” in a video address on Sunday, following two missteps by his administration regarding statements about genocide during World War Two.

“The mind cannot fathom the pain, the horror and the loss. Six million Jews, two-thirds of the Jews in Europe, murdered by the Nazi genocide. They were murdered by an evil that words cannot describe, and that the human heart cannot bear,” Trump said in a speech to the World Jewish Congress Plenary Assembly in New York on Yom HaShoah, Israel’s Holocaust Remembrance Day.

“On Yom HaShoah, we look back at the darkest chapter of human history,” Trump added. “We mourn, we remember, we pray, and we pledge: ‘Never again.’”

“We must stamp out prejudice and anti-Semitism everywhere it is found. We must defeat terrorism, and we must not ignore the threats of a regime that talks openly of Israel’s destruction,” Trump said in an apparent reference to Iran.

How to fathom the pain and horror of a jew-first regime whose titular leader, the commander of the most powerful military on Earth, so openly and obediently parrots jew numerology like a braindead puppet? Words like kikeservative come in handy.