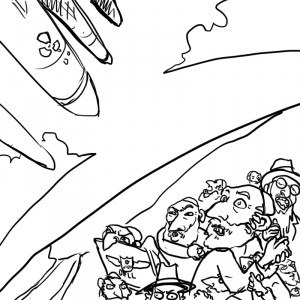 Jewish lives have infinite value, and non-Jewish ones none at all, which has obvious policy implications. For example, in a published article a prominent Israeli rabbi explained that if a Jew needed a liver, it would be perfectly fine, and indeed obligatory, to kill an innocent Gentile and take his. Perhaps we should not be too surprised that today Israel is widely regarded as one of the world centers of organ-trafficking.

If the Gentile population became aware of these Jewish religious beliefs and the behaviors they promote, major problems for Jews might develop, so an elaborate methodology of subterfuge, concealment, and dissimulation has come into being over the many centuries to minimize this possibility, especially including the mistranslation of sacred texts or the complete exclusion of crucial sections. Meanwhile, the traditional penalty for any Jew who “informs” to the authorities on any matter regarding the Jewish community has always been death, often preceded by hideous torture.

In 2009, Gene Expression blogger Razib Khan interviewed eminent evolutionary theorist David Sloan Wilson on the group selection ideas that have been his major focus. During this hour-long discussion, the theories of MacDonald became a major topic, with Wilson seeming to take them quite seriously, and pointing out that within the scientific framework “parasitism” has a simple technical definition, namely the exploitation of the large by the small. Unsurprisingly, the video record of such extremely touchy subject matter was quickly truncated to just the first 11 minutes, and eventually completely removed from both YouTube and BloggingHeadsTV. But it still at least partially survives in archived form

Unz maybe forgot to enable Javascript while looking at that BH page. The mp3 is 404, but the complete video is still there. I’ve put the 11 minute archive.org excerpt, which is the most critical part of the conversation, on TFeed.

In recent years, the history of Jewish expulsions from various European societies over the last thousand years has received considerable attention. The total number is somewhat disputed but almost certainly in excess of 100, with the 1930s policies of Hitler’s Germany being merely the most recent example, and Wired Magazine provided an interesting graphical presentation of this large dataset in 2013. Given these unfortunate facts, it may be difficult to point to any other group so consistently at bitter odds with its local neighbors

Most of these disheartening facts that have so completely upended my understanding of reality over the last decade could not possibly have come to my attention until the rise of the Internet, which partially broke centralized control over the distribution of information. But many other people surely must have known large portions of this important story long before that, and recognized the very serious consequences these matters might have for the future of our society. Why has there been so little public discussion?

I believe one factor is that over the years and the decades, our dominant media organs of news and entertainment have successfully conditioned most Americans to suffer a sort of mental allergic reaction to topics sensitive to Jews, which leads to all sorts of issues being considered absolutely out of bounds. And with America’s very powerful Jewish elites thereby insulated from almost all public scrutiny, Jewish arrogance and misbehavior remain largely unchecked and can increase completely without limit.

I’ve also sometimes suggested to people that one under-emphasized aspect of a Jewish population, greatly magnifying its problematical character, is the existence of what might be considered a biological sub-morph of exceptionally fanatical individuals, always on hair-trigger alert to launch verbal and sometimes physical attacks of unprecedented fury against anyone they regard as insufficiently friendly towards Jewish interests. Every now and then, a particularly brave or foolhardy public figure challenges some off-limits topic and is almost always overwhelmed and destroyed by a veritable swarm of these fanatical Jewish attackers. Just as the painful stings of the self-sacrificing warrior caste of an ant colony can quickly teach large predators to go elsewhere, fears of provoking these “Jewish berserkers” can often severely intimidate writers or politicians, causing them to choose their words very carefully or even completely avoid discussing certain controversial subjects, thereby greatly benefiting Jewish interests as a whole. And the more such influential people are thus intimidated into avoiding a particular topic, the more that topic is perceived as strictly taboo, and avoided by everyone else as well.

For example, about a dozen years ago I was having lunch with an especially eminent Neoconservative scholar with whom I’d become a little friendly. We were bemoaning the overwhelmingly leftward skew among America’s intellectual elites, and I suggested it largely seemed a function of our most elite universities. Many of our brightest students from across the nation entered Harvard and the other Ivies holding a variety of different ideological perspectives, but after four years departed those halls of learning overwhelmingly in left-liberal lock-step. Although he agreed with my assessment, he felt I was missing something important. He nervously glanced to both sides, shifted his head downward, and lowered his voice. “It’s the Jews,” he said.

I do not doubt that much of the candid analysis provided above will be quite distressing to many individuals. Indeed, some may believe that such material far exceeds the boundaries of mere “anti-Semitism” and easily crosses the threshold into constituting an actual “blood libel” against the Jewish people. That extremely harsh accusation, widely used by stalwart defenders of Israeli behavior, refers to the notorious Christian superstition, prevalent throughout most of the Middle Ages and even into more modern times, that Jews sometimes kidnapped small Christian children in order to drain their blood for use in various magic rituals, especially in connection with the Purim religious holiday. One of my more shocking discoveries of the last dozen years is that there is a fairly strong likelihood that these seemingly impossible beliefs were actually true.

It appears that a considerable number of Ashkenazi Jews traditionally regarded Christian blood as having powerful magical properties and considered it a very valuable component of certain important ritual observances at particular religious holidays. Obviously, obtaining such blood in large amounts was fraught with considerable risk, which greatly enhanced its monetary value, and the trade in the vials of this commodity seems to have been widely practiced. Toaff notes that since the detailed descriptions of the Jewish ritualistic murder practices are very similarly described in locations widely separated by geography, language, culture, and time period, they are almost certainly independent observations of the same rite.

Wow, just wow. Their particularist/supremacist religion, organ traffiking, fraud and lying as tribal values, swarming and screeching critics to death, Kevin MacDonald and the biological/parasitic view, the history of expulsions, the role of the jewsmedia, ritual murder. Unz cites so many of the most important aspects of jewing that, other than their toxic six million screeching, it’s hard to think of anything significant he missed. At any rate, gathering and connecting so many aspects at once, without being mealy-mouthed about it or trying to shift blame for it all elsewhere, makes anything he left out beside the point. The point is the exact opposite of the dissembling about jews pumped out by their apologists: jewing is real, jewing matters, jewing is harmful.

The fact that Unz is not just a jew, but a jew with a long history of public political activism, justifies a deep skepticism of his motives and intent. Unz unselfconsciously touches on (and minimizes) the issue when he writes:

Much of this dishonesty obviously continues down to recent times since it seems very unlikely that Jewish rabbis, except perhaps for those of the most avant garde disposition, would remain totally unaware of the fundamental tenets of the religion that they claim to lead

Of course it’s not just rabbis or their religion. This mentality Unz discusses – their racial animus, the disdain and visceral hostility jews exhibit toward non-jews, justifying their aggression by crying victim – is a collective and historic phenomenon. It’s blatantly visible in the constant shameless screeching of all those secular jews in the jewsmedia and all those jews on the internet demanding privileges and policies specifically benefiting jews, decrying “bigotry” and “hate” as if someone else is a better example than themselves, painting any opponent as both mentally ill and deserving of punishment. The pattern is visible as far back in history as you care to look.

Unz implies he didn’t know about or understand jewing until he read Shahak and MacDonald a decade ago. I don’t buy it. But even if it’s true, why did he not blow the whistle sooner? Has he only now realized that jewing is wrong and must be stopped? Absolutely not. He’s a cold and calculating fish. He estimates a backlash is inevitable now and he’s trying to get out in front of it. That’s what he’s been doing for this past decade. He certainly hasn’t decided to side with Whites against jews. As with the relative handful of jews who criticize their own tribe, Unz is the exception that proves the rule. He doesn’t want to end jewing, just moderate it, to sustain it.

59 thoughts on “Ron Unz on Jewing”