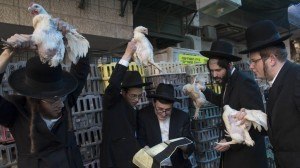 Here’s an instant classic in the vast, age-old genre of jews praising jews for their jewing. David Greenberg, author of Republic of Spin, reviews David Frum’s Trumpocracy: The Corruption of the American Republic:

Has any group of thinkers stood faster in defense of its principles since the rise of Donald Trump than the neoconservatives? A decade ago, when the political right had fallen on hard times, the neocons were derided by almost everyone for furnishing an intellectual rationale for the invasion of Iraq by George W. Bush ’68. But since 2016, neoconservatives—practically alone on their side of the aisle—have consistently opposed Trump for the damage they see him doing. Writers like Max Boot ’92MA, Eliot Cohen, Jennifer Rubin, James Kirchick ’06, Bret Stephens, Cathy Young, and Bill Kristol have resisted the pressures of tribalism at a moment when few dare to leave their partisan tents.

As community cohesion weakens, moral norms change. What would have been unacceptable behavior in a more homogenous national community becomes tolerable when a formerly ascendant group sees itself at risk from aggressive new claims by new competitors. Trump is running not to be president of all Americans, but to be the clan leader of white Americans. Those white Americans who respond to his message hear his abusive comments, not as evidence of his unfitness for office, but as proof of his commitment to their tribe.

But it’s difficult to say which jew in Greenberg’s list is most noxious.

The Yale Review link comes via Sailer, whose usual shtick is to pretend jews are “white”. Confronted with perfectly sober evidence that jews literally see themselves as the opposite of White the best Breezy Steve can do is try to laugh it off:

In the Current Year, are Members of the Tribe as witty as they used to be? Their current moral panic over “tribalism” is a particularly funny example of today’s Jews not getting the joke.

As usual, the joke is on Whites. When jews moralize against White tribalism (or supremacism, or victimology, or fake news, or privilege, or fragility, or hate, or any other buzzterm the jews have weaponized and aimed at Whites) it’s not because they are unaware that the shoe fits their tribe better than anyone else. By so brazenly trying to shift blame onto Whites they are clearly expressing their keen racial awareness and seething racial animus.

24 thoughts on “On Tribalism”