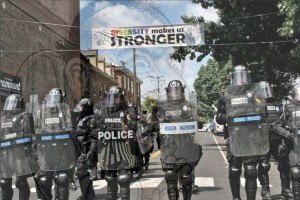 I was not there, but I think my take on Charlottesville 1.0, and the two most substantial comments I’ve made about it since, were correct.

Charlottesville demonstrated that Whites cannot freely assemble and speak, as Whites, in public. The swift and hysterical reaction from the local, state, and federal governments, officially condemning Whites because “anti-semitism”, demonstrated that Whites and jews are political opposites. Decades of phony judicial dancing around race and privilege have suddenly been supplanted by explicit executive and legislative proclamations that the regime is officially anti-White out of deference to jews.

White men flocked to Charlottesville en masse sensing the potential for righteous combat with anti-Whites, and the first thing most every alt-righter with a soapbox did in the aftermath was balk at and denounce that urge. Their fake hero ultimately denounced them. They ignored it. Whites are so accustomed to our fake heroes shitting on us that we take it for granted.

What makes this a tragedy is that it could be different. White as a race have a characteristic capacity for daring, for heroism, for collective mercilessness aimed at enemies, especially traitors. This capacity isn’t gone, it has been hijacked and circumcised. The jews make movies glorifying White self-sacrifice and directing it toward their own ends, even as they psychopathologize its use toward our own. Unlike White misleaders, the jews don’t discourage fanaticism and violence, they deliberately stoke it and AIM IT AT WHITES. While the Ignatievs and Ciccariello-Mahers slyly incite White genocide, the Taylors and MacDonalds respond by babbling nonsense about “pathological altruism”. This behavior is not a product of jew dominance and White failure, it’s the cause.

Whites need to get their heads straight, demand more, tolerate less. It starts, or doesn’t start, with leadership.

For the past year the jewsmedia has moaned about Charlottesville 1.0, shocked that a handful of Whites had the audacity to gather publicly and chant, “jews will not replace us”. The Whites who did that are heroes – they provoked and flushed out the anti-White/pro-jew regime.

A year later and the fake hero, the kikeservative-in-chief, still hasn’t done anything for his White supporters. Instead he tries to please the jews who condemn him by condemning all types of “racism”. The jewsmedia screeches, predictably, that this isn’t anti-White enough. Will he respond by defending his White supporters? No. He’ll respond just as he did last year, by kicking his lickers and licking his kickers.

So far Charlottesville 2.0 is looking like 1.0, but this time with hardly any prompting from defiant Whites. Anti-Whites now constitute all sides of the theatrical production, their only real disagreement being how far and how fast to elevate non-Whites above Whites.