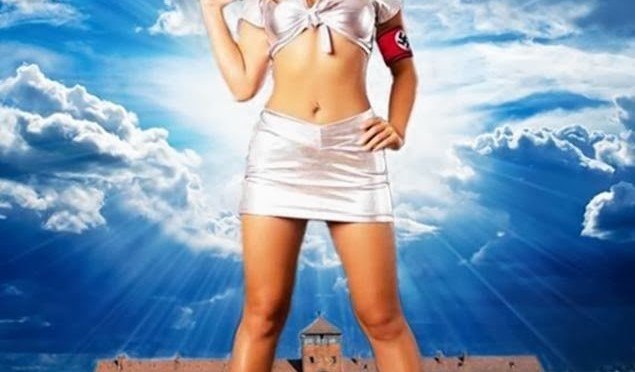 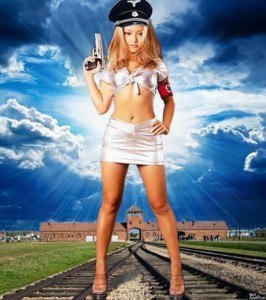 “Oh wait, she’s a Hitler fan? How insulting! I’m offended! This is intolerable! She needs to be locked up in a mental hospital!”

Tila Nguyen‘s latest turn in look-at-me antics immediately captured the attention of the jewiest portions of the jewsmedia. Their usual irreverent snark muted, what came out instead was scandal and bemusement, anger and betrayal. “How dare this otherwise upstanding member of two (three? four?) oppressed classes be so careless and uppity?”

Jezebel: Tila Tequila Is a Nazi Sympathizer Who Calls Herself ‘Hitila’

Esquire: Wait, Hold On: Tila Tequila is a Neo-Nazi Now?

Of course, the jewsmedia being the jewsmedia, the shenanigans of even Z-list celebrities is BIG NEWS when it confounds the jews. Thus Tila Tequila’s transgressions against jewish sensibilities have not remained confined to celebrity-gawking cesspits, but has instead been elevated into a bona-fide mediacaust.

According to the News, Tila felt mocked and rejected when she tried to convert to judaism. This only adds to the case that this woman – from her fame to her infamy – is a product of judaization. It’s hard to fault the goyim for not understanding that the jews are jews and the goyim are goyim – after all, you don’t get anything but double-talk about it from the jewsmedia. Though the jews themselves are well aware of such distinctions (and indeed Tequila is an example of the tribe’s aphorism that a “philo-semite” is just an “anti-semite” who doesn’t know it yet), they’re also keen to stick to their age-old canard that jewishness is all about religious beliefs and that jews are always blameless victims. Thus Tila Tequila must be anybody’s fault but theirs.

Where will this go? Nowhere. And then quickly down the memory hole.

Going forward, as jews increasingly shift their attention toward new hosts, the “minority” coalition, being jew-led, is sure to be increasingly rocked by jew-centric controversies of this sort. During the awkward transition phase, professional jews like Brian Levin, whose job description is literally director of “hate” and “extremism”, is thinking it best to see it as a joke, a gift to sinecured jews like himself. Will the other “minorities” go for that? Does it matter? 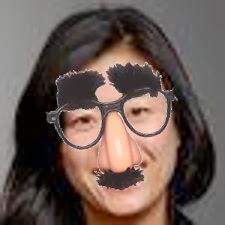 Christians arrrooksame – too White, too “racist”.

A recent open letter to the Christian evangelical church, signed by a wide array of Asian-American scholars and Christian practitioners, complained of numerous racially offensive incidents in evangelical circles. In yet another sign of callousness, Asian-Americans were initially told, in effect, to “get over it.” Instead, it is U.S. white Christians who must “get over” their whiteness and their failure to see the already changed face of Christian faith.

If U.S. evangelical Protestant churches – now 81 percent white, according to 2012 Pew research – hope to become a more diverse representation of all the people of God, they must respond more positively to constructive criticism like that in the recent open letter.

But persistent use of derogatory racial stereotypes by many white evangelical churches continues to surface in a variety of ways, among leaders, at religious events, in church practices and, painfully often, in church curricula.

It is the conceit of religious white racism to presume that one’s evangelicalism transcends racial and cultural identities, making such “worldly” labels no longer important. The letter reminds church leaders that those identities still matter. White evangelical Christians must stop clinging to an alibi of color-blindness and recognize that vibrant growth within “their” churches has much to do with nonwhite members’ views of them.

“Let us angelic asians into your churches and tell you how to run them, you lying, evil Whites!”

Many Whites, and especially Christians, fancy themselves blind to race. It isn’t fooling asians, who are instead following the jewish example, proclaiming how different they are from Whites, whining loudly about how offended they are at not being treated to a different, better standard by “racists”.

What’s the best way to reach out to Asian voters? Tell them you’re Jewish so you can relate. Right?

That’s the route Democratic candidate Dan Adler took in his most recent ad for California’s 36th District special election. In a heavily staged discussion among constituents at a set suggestive of a Korean-owned dry cleaner, the former Disney executive tells a woman behind the counter–who speaks with a heavy Asian accent–that he can relate to her concerns because “my wife is Korean.”

“My family is Jewish.”

“We minorities should stick together,” she replies. Adler laughs as a young Asian couple looks on–the man’s shirt opens to reveal his Chinese script tattoos.

“Dan Adler. Send a mensch to Congress!” a multi-racial crowd shouts at the end, noting the Yiddish word for a person of high character. “What’s a mensch?” the woman from the dry cleaner asks the camera.

Adler’s faux pas here, according to Hartman, is the use of stereotypes in his explicitly pro-minority, implicitly anti-White campaign commercial. Something tells me this will not upset either Adler’s jew or Asian funders and voters, and if any Whites complain they can look forward to being branded and brushed off as “racists”.

Adler’s message assumes it is right and good that:

1) “minorities” see themselves as natural allies against non-“minorities”, ie. Whites.

2) jews identify as “minority”, not White.

Your deracinated White friends will not appreciate the use of this video as a teachable moment, but rub their noses in it anyway.

This is so incredibly ignorant, it’s almost hard to believe that she’s for real. I’ve re-watched it several times now, and I actually find myself laughing at the sheer stupidity. For those who want the literary version, here’s the full transcript of her rant. It’s equally hilarious and infuriating.

He links a few responses from UCLA administration and various asian groups condemning the video, and Alexandra Wallace grovelling for forgiveness. AAM’s blog post currently concludes with the following:

UPDATE: The UCLA Asian American Studies Center has also released a statement on “Asians in the Library.” An excerpt:

“Asians in the Library” is a travesty on many levels, representing an attack on Asian and Asian American students and their families and undermining UCLA as a global university with deep ties to communities and institutions in Asia and other parts of the world. It entails a “new racism” by foregrounding students who speak Asian languages and have different family traditions, as it insidiously groups and attacks UCLA’s American-born as well as our international students of Asian ancestry. As the only University of California campus without a diversity requirement, UCLA surely needs to implement a diversity requirement that will expose every student to the task of living civilly with people of different origins, backgrounds, orientations, and beliefs, whether they are born here or come from abroad.

A diversity requirement might not be such a bad idea.

In the aftermath of a racially offensive Internet video, two University of California, Los Angeles professors are urging the administration to require diversity training for students in hopes of discouraging such incidents.

Dr. David Yoo, director of the Asian American Studies Center, and Dr. Lane Hirabayashi, department chairman of Asian American studies, issued a joint statement this week observing that, “We still have much work to do before we can claim to live in a ‘post-racial’ society.”

The phrase “ching chong” is considered an ethnic slur that historically mocked Chinese speaking patterns but sometimes has been aimed at other Asians. Asian Americans comprise the largest racial group among 26,000 UCLA undergraduates at 37 percent; Whites make up 32 percent.

Both UCLA scholars called on the administration “to respond institutionally since the video addresses larger issues of campus climate and culture.” They called the video rant “a travesty representing an attack on Asian and Asian American students and their families and undermining UCLA as a global university. This type of prejudice and use of derogatory words cannot be tolerated.” They urged the administration to implement a diversity requirement for students.

UCLA Chancellor Gene Block released a statement on Monday afternoon saying he was “appalled” by Wallace’s comments and that her opinions do not reflect nor represent UCLA.

“I recoil when someone invokes the right of free expression to demean other individuals or groups. Speech that expresses intolerance is indefensible,” Block said.

Colleges around the country have steadily added academic courses with a diversity component or global cultures aspect, requiring undergraduates to complete a certain number of credit hours as a graduation prerequisite.

The problem is indeed ignorance – an ignorance deliberately created by an orwellian twisting of words which pathologizes Whites for being “intolerant” of “diversity”. The unspoken premise is that White displacement and dispossession is right and good, therefore Whites are mentally or morally defective for objecting in the slightest way. Even the confused rant of a lone, exasperated, powerless White against “ching chonging” “asians in the library” is an intolerable, indefensible crime. Wallace will be punished for her insolent outburst, and the already widespread indoctrination of Whites as to our proper subordinate and silenced place will be further broadened and accelerated.

Those who lie about their motives and methods have no real standing to blame others for being ignorant of them. Dishonesty engenders ignorance. But let’s not pretend these anti-White “anti-racist” liars are decrying our lack of understanding. They mock us for it. When they call Whites ignorant it is to abuse and intimidate us. Their orwellian use of the term is nothing but a pretentious, exceptionally intolerant way of trying to shut someone up by calling them stupid.

As with most Whites, Wallace has been misguided and probably used to imagine that the goal of her university and the overarching regime is to educate people, to create a fair, tolerant society where all people are treated equally. Condemned by powerful, race-conscious, self-interested asian organizations and insulted and threatened with violence by faceless hordes of angry asians, Wallace is now finally getting a real education.