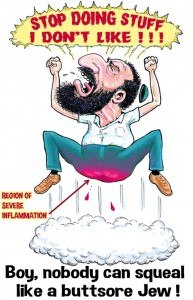 BREAKING: Britain's leading Jewish weeklies, @JewishTelegraph, @JewishChron and @JewishNewsUK, for the first time have run the same leader on their front pages, with each other's logos as a sign of the extent of communal anger and concern over #LabourAntisemitism#UnitedWeStand pic.twitter.com/WWpb19CoaZ

The full text of their monolithic demands, via The Jewish Chronicle:

We do so because of the existential threat to Jewish life in this country that would be posed by a Jeremy Corbyn-led government.

We do so because the party that was, until recently, the natural home for our community has seen its values and integrity eroded by Corbynite contempt for Jews and Israel.

The stain and shame of antisemitism has coursed through Her Majesty’s Opposition since Jeremy Corbyn became leader in 2015.

From Chakrabarti to Livingstone, there have been many alarming lows. Last week’s stubborn refusal to adopt the full International Holocaust Remembrance Alliance’s definition of antisemitism, provoking Labour MP Dame Margaret Hodge to call her leader an antisemite to his face, was the most sinister yet.

Labour has diluted the IHRA definition, accepted in full by the government and more than 130 local councils, deleting and amending four key examples of anti-Semitism relating to Israel.

Under its adapted guidelines, a Labour Party member is free to claim Israel’s existence is a racist endeavour and compare Israeli policies to those of Nazi Germany, unless “intent” – whatever that means – can be proved. “Dirty Jew” is wrong, “Zionist bitch” fair game?

The reason for this move? Had the full IHRA definition with examples relating to Israel been approved, hundreds, if not thousands, of Labour and Momentum members would need to be expelled.

With the government in Brexit disarray, there is a clear and present danger that a man with a default blindness to the Jewish community’s fears, a man who has a problem seeing that hateful rhetoric aimed at Israel can easily step into anti-Semitism, could be our next prime minister.

On 5 September, Labour MPs vote on an emergency motion, calling for the party to adopt the full IHRA definition into its rulebook.

Following that, it will face a binary choice: implement IHRA in full or be seen by all decent people as an institutionally racist and anti-Semitic party. After three deeply painful years for our community, September is finally make or break.

These jews are shamelessly singling out and demanding privileged treatment for jews, in terms spelled out by jews, solely because they are jews. The Labour party has in fact already conceded on all these points. The increasingly hysterical screeching of these jews, as if they are victims of some injustice, is aimed at extending the privileged treatment even to jews who are openly acting as agents of a foreign state.