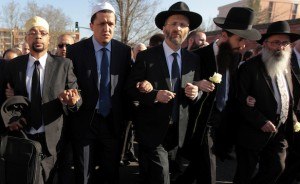 James Kirchick explains Why ‘Islamophobia’ in Europe Cannot Be Equated With Anti-Semitism, Either in Nature or Degree, at Tablet Magazine:

Much of what passes these days for “Islamophobia”—a conversation-stopping word meant to render any and all criticism of Islam as “racist”—simply cannot be equated with anti-Semitism, either in nature or degree. To express qualms about the reactionary attitudes prevalent in many Muslim communities about women, as did the late Dutch politician Pim Fortuyn (who was murdered for his heresy), is not racist, nor is it in any way comparable to the bigotry directed at Jews, historically or today. In the United States, FBI statistics show that, since Sept. 11, anti-Semitic attacks have far outnumbered anti-Muslim ones. In Europe, mobs do not rampage and attack Muslims or mosques following Islamic-inspired terrorist attacks, as Jews are regularly assaulted whenever tension flares in the Middle East.

None of this should obscure the fact that there are important similarities between the Muslim and Jewish experience, of both today and yesteryear. Muslims, Reed College Anthropology Professor Paul Silverstein told the San Francisco Chronicle in 2006, are “the object of a series of stereotypes, caricatures and fears which are not based in a reality and are independent of a person’s experience with Muslims.” Replace “Muslims” with “Jews” and you get a serviceable definition of anti-Semitism. In Europe today, both Muslims and Jews have been the targets of campaigns aimed at outlawing their traditional religious practices, namely, circumcision and the provision of kosher or halal food. Claiming their real motive to be concern for the “bodily integrity” of children or “animal welfare,” militant European secularists portray Muslims and Jews as barbaric peoples stuck in the past. Living in Germany two years ago at the height of the country’s anti-circumcision hysteria, I was confronted with provocative advertising campaigns that effectively likened Jews and Muslims to child molesters. French far-right leader Marine Le Pen, who likes to fashion herself a friend of the Jews, has called for banning not only the headscarf but also the kippah in public.

Nothing new here – just your typical jewish double-talk and hypocritical in-your-face moralizing. Muslims are innocent victims, just like jews, only less so. Whites are the Other, the common enemy, their mutual victimizers, stereotyped as “hysterical” “militant” “provokers” whose “stereotypes, caricatures and fears are not based in a reality”.

Kirchick illustrates how the jewish narrative is extended into a more generalized victim narrative, a narrative in which “racism” and “islamophobia” are both similar and yet incomparable to “anti-semitism”. This reflects the archetypical role of the jews as the first and foremost victim-narrators. The term “new jews” makes this role explicit, designating some group as junior victim-narrators, like the jews, and implying a special status, like the jews. Thus “new jews” are righteous, but not as righteous as the real jews, who otherwise wouldn’t need to be invoked, much less get to have a say in it.

The fact is that the jewish narrative and its terms are used proactively and aggressively, not defensively. The target of their aggression, their characteristic psychopathologization and demonization, is Whites. Their anti-White narrative has been institutionalized and is now a commonplace in the judaized corporate media.

This long-term jew-led assault has put Whites collectively on the defensive, leaving us disoriented and demoralized. In reality Whites, who according to the jewish narrative control everything, have no political representation as such. Leaders who openly and unapologetically identify with and advocate White interests have been excluded or hounded out of power as “racists”. The consequences of this have been disastrous for Whites.

Just one tip of one bloody iceberg has come to light in Rotherham. Unsurprisingly, there have been efforts to mischaracterize the harm as self-inflicted or as a consequence of partisanship. It is neither. What is evident in the revelation of this long-term and wide-spread predation is not only the humiliation of being colonized and despoiled by hostile aliens, but the enervating way in which it has been directly facilitated by the jews and their poisonous narrative.