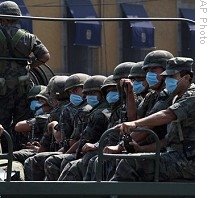 In “Greenspan to testify on immigration” Steve Sailer wrote:

The Open Boarders (sic) crowd isn’t even trying to make sense these days, are they?

In identifying them, “Genocidal Immigrationists” comes closer to the truth. For example, with that understanding of their intent, their nonsense makes perfect sense.

When something doesn’t make sense it’s often because you’re view is distorted or incomplete. But sometimes it’s willful. Sailer himself likes to call attention to and ridicule this kind of willful ignorance, categorizing his observations under “political correctness makes you stupid“.

Recognizing that many of the wealthy, intelligent, educated, and well-informed progressivist globalist administrators of the world actively perpetrate genocide and many more acquiesce to and abet it is apparently something Sailer finds too dangerous to permit his commentariat to try and deride or dispute.

There has been no substantial criticism of Genocidal Immigrationists, though the accusation is quite explicit. Beside the relatively light volume of visitors here I attribute this mainly to the accusation’s validity. At best the most ardent supporters of mass immigration simply don’t care who suffers the consequences, and at worst they intend them. Their justification usually hinges on claims that immigration is profitable overall. When they respond to those who object it is only to smear us as losers, haters, or some combination of the two – another sign of their bad faith and ill will.

I learned only recently from a post at Majority Rights titled ‘La Loi’ de Frédéric Bastiat that there’s an old name for the mendacity I had long noticed genocidal immigrationists indulging in, particularly those of the economist persuasion. It’s called the Broken Window Fallacy, which is the idea that any economic activity whatsoever is more desirable than none. For example, when our genocidalist administrators permit thousands of aliens to flood into our countries to the point that they overload our schools, hospitals, courts, prisons, housing, utilities and roads we shouldn’t see that as bad. No, it’s a wonderful boon. We’re so very lucky because it means lots of jobs and increases the globalist economist’s holiest of holies, the Gross Domestic Product. Never mind that the lives and efforts of some of our finest men and women end up flowing down a rat hole or into aiding those who hate us.

Globalism is in essence a world-scale pyramid scheme. It can only exist because the kind of economic wisdom contained in Bastiat’s essay What Is Seen and What Is Not Seen has for too long not been seen.

In their initial responses to the Swine Flu various globalist mouthpieces again reveal their genocidal motivations, falling over themselves as they have not to calm the public, or to announce measures that would slow or blunt the impact of the outbreak. No. Instead their first reactions have been to announce loudly and clearly that closing borders and restricting travel would most definitely NOT happen – and that only xenophobes and nativist loser-haters who would think such measures might help. Of course if your main concern is continuing to flood the West with third worlders, then an outbreak of infectious disease isn’t important to you except as a threat to trade and travel.

Here’s one typical example from Monday:

Travel restrictions under consideration by the U.S. to prevent the spread of a new flu virus may be influenced by politics more than science, the World Health Organization’s chief said today.

WHO doesn’t recommend closing borders or restricting the movement of people or goods, Margaret Chan, director-general of the United Nations agency told leaders from health groups around the world in a conference call today. The disease, which may have caused more than 100 deaths and sickened more than 1,000 people, has spread too far and would be impossible to contain by closing borders, she said.

Note the numerous hysterical exaggerations. “Impossible to contain”, “every country”, “bring the world’s economy to a standstill”. Note also the inversion in the headline. It is WHO who is driven by politics more than science. The fact is that the rate and extent of the spread of an epidemic is directly related to the frequency and intimacy of contact among people. Reducing interaction slows the rate of infection, stretching it over time, reducing the severity of the impact (so all the cops, firefighters, doctors, and nurses aren’t sick at once) and making it more likely medicine can be produced and distributed.

I don’t think a world-class executive like Chan or her advisors fail to understand this. Instead it seems they are motivated by different priorities that override any such understanding.

Travel to Asia plunged during in the 2002-2003 outbreak of severe acute respiratory disease, or SARS.

SARS, which killed 770 people, reduced passenger air traffic 19 percent in Asia and 8.2 percent worldwide. Malaysia shut its borders to travelers from China and Hong Kong, and other countries instituted health checks at airports and borders. The U.S. Centers for Disease Control and Prevention discouraged travel to some affected countries and said it might screen travelers in a bird flu epidemic.

“When we talk about travel advisories, we cannot think of the old days when we were dealing with SARS,” Chan said today. “It’s a totally different ballgame now.”

Calling 2002-2003 “the old days” and claiming the SARS outbreak is “totally different” is a transparently lame attempt to deny that closing borders and reducing travel might help. “Who cares how many people die”, seems to be the thinking.

Contrast the current reaction with the reaction of the US government in 1976 to a single death from Swine Flu. Advisors feared a pandemic because “[t]he virus isolated at Fort Dix is antigenically related to the influenza virus which has been implicated as the cause of the 1918-1919 pandemic which killed 450,000—more than 400 out of every 100,000 Americans”:

Then President Ford, on the same March 24, 1976, only one day after his surprise loss to Ronald Reagan in the North Carolina Republican presidential primary, announced on national television his recommendation to the American public for a crash nation-wide influenza vaccination program to include “every man, woman and child.” Congress responded promptly to the president’s call for funds (appropriations were voted by the Senate April 9, by the House April 12, and signed into law April 15, 1976). Vaccine was produced, field tested, and evaluated in April, May and June. There were problems with producing the vaccine. Nevertheless, between October 1 and December 16, 1976, the U.S. Public Health Service, through state and local public health department “public sector providers,” rapidly spread out among the citizenry to successfully vaccinate 85% of 40 million voluntary vaccinees in 10 weeks (the other 15% of the 40 million voluntary vaccinees received their vaccinations from “private sector providers”).

This morning I was listening to NPR and was quite surprised to hear the commentator declare that the common thread in the outbreak so far was a connection to Mexico.

A minute later they mentioned that the israeli health minister found the word swine offensive to jews and muslims and suggested calling it mexican flu instead, which offended mexicans. That made me laugh quite a bit, though I sobered up when I realized it’s only a matter of time before the selfless advocates for all “people of color” decide to call it White flu and blame blue-eyed people for engineering it. Nobody will care if that causes us any offense.

Some people are puzzled as to how human, pig, and bird strains of the flu have mixed together, but if you have spent any time in rural Mexico the answer is obvious: these creatures all live together in close quarters.

Commenter El Caudillo quotes this and suggests a more accurate term would be mestizo flu. I didn’t bother testing if Sailer would permit a comment suggesting genocidal globalist flu is even more accurate. Ben Tillman said as much in a subtle way:

It’s the evolution of virulence through horizontal transmission. Immigration policy is designed to foster such increased virulence.

Indeed, that’s the science of it. Obviously the politics are instead driven by what is financially and biologically profitable for the mendacious few at the tip of the pyramid. The rest of us be damned.

67 thoughts on “Symptoms of Hostility”