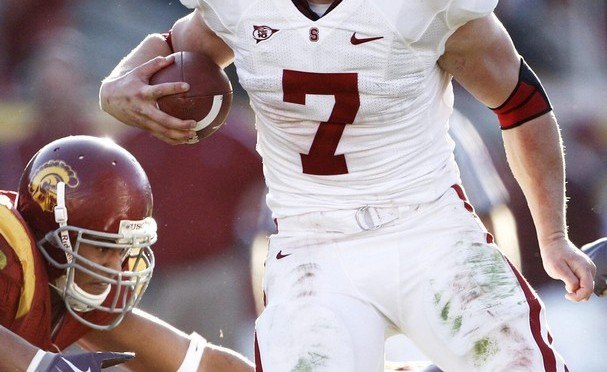 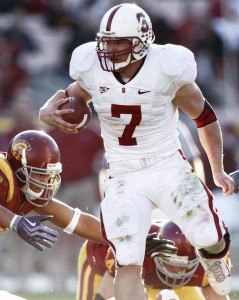 If you’ve seen Toby Gerhart carry the football, you’re well aware that the former Stanford halfback and Heisman Trophy runner-up is about as subtle as Iron Man. It’s no surprise, then, that as the NFL draft approaches, the player one AFC front-office executive described as “a bowling ball with butter knives” is hell-bent on obliterating the perception that he lacks the athleticism to succeed in the pros.

I’ve spoken with numerous NFL talent evaluators about Gerhart over the past few months, and there are plenty of skeptics who don’t seem to be locked into mindless stereotypes.

Did skin color keep Stanford RB Toby Gerhart from being a first-round pick? – The Huddle: Football News from the NFL – USATODAY.com:

“One team I interviewed with asked me about being a white running back,” Gerhart said. “They asked if it made me feel entitled, or like I felt I was a poster child for white running backs. I said, ‘No, I’m just out there playing ball. I don’t think about that.’ I didn’t really know what to say.”

Opinions seem mixed on Gerhart, who was obviously productive but also absorbs a lot of punishment and isn’t especially shifty. One scout told Silver that Gerhart’s pigmentation was definitely working against him.

Nothing to see here, move along folks. When a White guy faces race-based bias it’s a “perception that he lacks the athleticism to succeed” and his “pigmentation” is “working against him”.

Last Friday, in a judicial decision that hinged on a legal technicality, the U.S. Court of Appeals in Washington, D.C., upheld the right of the local pro football team to keep its unconscionable nickname.

Gloated team attorney Bob Raskopf, “It’s a great day for the Redskins and their fans and their owner, Dan Snyder.”

Alas, it was another shameful day for America.

In clinging to the most racially offensive moniker held by a major U.S. professional sports team since the Emancipation Proclamation – yes, I know, since forever – the franchise continues to offend some Native Americans and assault the sensibilities of a citizenry that should be long past such insensitive and shallow depictions.

How can a large majority of us not be offended? Imagine trying to explain “Redskins” to a foreign visitor or a time-traveler from the future? Every time I say the word, I throw up in my mouth a little and wonder why there is no widespread outrage.

Would we “honor,” say, Chicago’s African-American population by calling its NFL team the Brownskins?

If the NBA placed a franchise in Hawaii, would it consider paying homage to the islands’ Asian influences by competing as the Yellowskins?

And while I’m sure we could all come up with some Jewish slurs to continue the analogy, I submit that an anti-Semitic major league owner like Marge Schott might’ve been quite comfortable fielding a team known as the Foreskins.

Ridiculous? Absolutely. And Redskin is just as absurd, whether you’ve been conditioned to regard it as normal or not.

If Toby Gerhart were a jew Silver wouldn’t describe the problem as “the perception that he lacks the foreskin to succeed in the pros”. He’d describe it as “anti-semitism”. He’d be throwing up in his mouth and wondering why there is no widespread outrage.

Gerhart isn’t a victim of his skin color. He and other White players are subjected to a different race-based standard by sports and media machers who favor “African-Americans” over “whites”. We are conditioned to regard this as normal. It’s not.

So, why are there a lot of white starting tailbacks in high school, very few in big time college football, and none in the NFL?

There are three general explanations:

Stereotyping and Discrimination Against Blacks (A.K.A., Did You Know that Jewish Players Used to Dominate Basketball?) This is the dominant public explanation put forward by the sporting press. The party line is that blacks are forced by poverty to become multimillionaire stars, while wealthy whites relax in the lap of luxury by, uh, playing center or breaking up the wedge on kickoffs or … well, never mind. The facts aren’t important.

As Tom Wolfe implied in I Am Charlotte Simmons, this theory is motivated less by any serious urge to explain reality and more by Jewish pundits’ concerns over whether honest analysis of racial differences is good for the Jews.

… four poorly postured middle-aged white sportswriters sat slouched in little, low-backed, smack-red fiberglass swivel chairs panel-discussing the ‘sensitive’ matter of the way black players dominated basketball. “Look,” the well-known columnist Maury Fieldtree was saying, his chin resting on a pasha’s cushion of jowls, “just think about it for a second. Race, ethnicity, all that—that’s just a symptom of something else. There’s been whole cycles of different minorities using sports as a way out of the ghetto. …

Maury Fieldtree goes on to talk about the Irish and boxing, Italians and boxing, Germans and football, and then, inevitably:

In the 1930s and 1940s, you know who dominated professional basketball long before the African Americans? Jewish players. Yeah! Jewish players from the Jewish ghettos of New York!”

The Rube Goldberg ish logic underlying the conventional wisdom is, roughly, that

A) If it became socially acceptable to admit in public that blacks might have on average genetic advantages in jumping and sprinting; then

B) It might become acceptable to admit that maybe blacks have lower average IQs for genetic reasons; which would then

C) Let the gentiles find out that Jews might higher average IQs for genetic reasons; thus,

D) The goyim will come for us with their torches and pitchforks; and therefore,

E) We must just bury the whole topic in mindless kitsch to prevent A from ever happening.

In contrast, the two serious theories are:

Genetics: As O.J. Simpson explained to Time in 1977: “We are built a little differently, built for speed—skinny calves, long legs, high asses are all characteristics of blacks.”

Stereotyping and Discrimination Against Whites: The website CasteFootball.us has long been single-mindedly documenting outstanding young white athletes who have been channeled by coaches from traditionally black positions such as tailback, cornerback or wide receiver to whiter, less glamorous positions such as linebacker, strong safety, or tight end.

The conventional wisdom is actually a combination of all three theories. “People of color” are discriminated against and biologically superior and it’s right and good to discriminate against Whites because of the stereotype that they’ve been discriminating against superior “people of color” for ages.