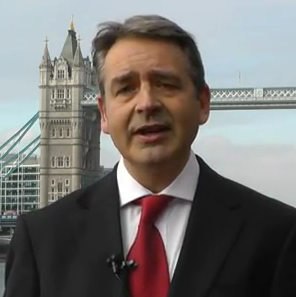 David Cameron’s Conservatives will not talk about the major issues, which to me are mass immigration – which now has got to such a point that it equates to population replacement – and they won’t talk about Islam. And of course Labour won’t, and of course the Lib Dems won’t.

The only party that will talk about it is the British National Party, but I don’t think they are going anywhere politically. They may very well be the biggest national[ist] party in the country, and there’s an awful lot, tens of thousands of people, who support the BNP but do not support a leader who is a holocaust denier and has the background that he has. So I can discount the BNP in terms of really gaining electoral success in the future, and the mainstream parties as I just said are absolutely useless when it comes to it.

Paul Weston on the Woolwich Killing, Islam and the State of Modern Britain presents his views in more detail. At 1:38 he explains why “conservatives” behave as they do:

They have to admit, that if there is a problem with Islam, they have to do something about it. And if you want to do something about it, that automatically makes you a far-right, racist, xenophobic bigot. And they don’t want to be labeled that. So they would rather betray their entire country than be labeled a racist. And this whole racism thing has got to stop. . . . And when they talk and label us as racists they’re doing this because the left-liberals have declared a racial and cultural war on the indigenous people of this country. It’s what they’re doing. Everything they’re doing right now is literally a racial and cultural war.

Genocide. Race war. Treason. Weston offers a remarkably articulate, unvarnished view of what’s happening not only in Britain but across the West. It’s quite a pleasure to see and hear someone so gifted stand up and give voice to these views, much in line with my own. Unfortunately, Weston suffers the same reticence he sees in “conservatives”. He’s afraid to associate with a “holocaust denier”, much less be labeled one. He wants the whole “racism” thing to stop, but not the “anti-semitism” thing.

This hobbles Weston’s analysis. He acknowledges the critical importance of race. He recognizes government-imposed immigration and multicultural policies as genocide. He calls it a racial war. Then, when when it comes to the who/whom and motives, he reverts to “conservative”-speak, mischaracterizing the enemy as “left-liberals”.

“Left-liberal” was a favorite of fifth-columnist jew Lawrence Auster, though Weston’s rhetoric is best understood as an outgrowth of a broader jew-first movement known as the counter-jihad. Norwegian ultra-nationalist Anders Breivik referred to this movement as “the Vienna school“, alluding to Gates of Vienna, a nexus of sorts for a loose network of websites and forums hosted by self-professed pro-Westerners. Counter-jihadists can be understood as quasi- or even pseudo-nationalist dissimulators. Their opposition to muslims and islamization is ultimately predicated upon support for jews and judaization. Full-throated advocacy for jewish nationalism is de rigueur. White nationalism is regarded with skepticism. White racial identity is regarded with contempt.

Your past is evil. You deserve everything that you now get as a result of what your ancestors did a long, long time ago.

This is the jewish narrative in a nutshell. Such attitudes are so prevalent and easy to find because anti-Whiteness is at the heart of jewish identity and jews have power.

Weston understands the evil-White-oppression template but considers the holocaust version of it sacrosanct. He stares jews in the face and pretends he sees “communists”. His passionate speech about genocide concludes with him feigning ignorance about the who and why of it all.

The article Weston wrote about his exchange with Gable, The Left — Mad, Bad, or Criminally Ignorant?, was reposted and commented on at Gates of Vienna. It’s even more telling. The dissembling starts right in his introduction:

In the peculiar world view of communists, anyone who disagrees with them is a fascist

Weston engaged Gable because he understands “fascist” is code for anti-jew. He plays the same game by using “communist” instead of jew. For whatever reason, Weston will not see even the jews who attack him as enemies. He wonders if they might be mad or ignorant or even criminal, but even so he thinks they might still be convinced to join forces with him against the real enemy:

Sonia, as an organisation claiming to fight against racism and fascism, you would have my full support. I am viciously attacked by the real far-right, and they are deeply unpleasant people.

I simply cannot understand what thought processes drive you to support the dilution and eventual extinction of a decent race of people and their culture, in favour of an emerging mono-cultural and supremacist majority which pays scant regard to the rights of women, Jews, and all those not of the Muslim faith. The parallels between Nazi ideology and fundamentalist Islamic ideology are pretty much identical.

And you support this, and attack people like me?

By playing the what’s-good-for-the-jews card he gives the game away. Gable attacks him because she disagrees with him on this point. Weston concludes, once again, by acting as if he cannot understand. But I think it’s clear enough.

In trying to explain “conservatives”, Weston explained himself. If he were to admit that there’s something wrong with the jews, that there’s a connection between their victimology, their rabid anti-White thought processes, and the genocidal racial war he decries, then he’d have to do something about it. It seems he doesn’t because he’s more concerned about defending jews than he is about defending White Britons.