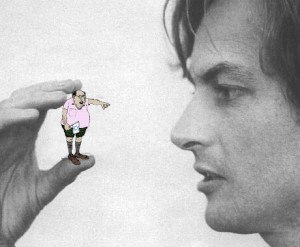 A recent twit from Richard Dawkins to his 1.05 million followers (retwitted by 325, favorited by 498):

Biologists disagree over how, or whether, to define race. But there is NO sensible definition whereby either Judaism or Islam is a race.

This is intellectual sleight-of-hand, a word game in which Dawkins has substituted “judaism” for “jews”. It is the same trick the jews themselves use – emphasizing the ideological, the religious disguise, to distract from the biological, hereditary nature of the group itself. Dawkins is a world-famous biologist, specializing in evolution. He is too intelligent to not comprehend the fallaciousness of this game.

He may have been trolling, intentionally mocking the fallacy. More likely he was lamely trying to defend himself from the jews and muslims who call him a “racist”. Jews deliberately conflate jewishness with judaism, encouraging others to do the same, but they also don’t hesitate to cry “racism”, because they understand better than anyone that their connection to each other is racial.

The pretense that jewishness equates to religion falls apart as soon as you start asking questions. Which religion? What about so-called “jews of no religion”? For a more detailed examination see Pew Polls Jews, as well as Jewish Crypsis – Religion – Part 1, Part 2, Part 3, and Part 4.

Kevin MacDonald’s article, Get into Twitter. Be Depressed., elicited a comment from James Reinfeld calling attention to my recent work:

Tanstaafl at Age of Treason is doing podcasts on intellectuals such as Francis Parker Yockey and their thoughts – or really their lack of adequate thoughts – on the Jews. The impression I get from these confirms the frustration I had myself in looking up the wise old men of the white race for thoughts that might help us in this crisis.

Before Kevin MacDonald, no one knew anything about the Jews, and the danger to whites as whites. Attempts to grapple with a Darwinian challenge using theological mental tools, passing references to Jewish attitudes and habits with no development on the potential danger they posed and no advice on how whites should defend themselves as whites, or at most inclusion of Jews on lists of alien peoples who really posed nothing like the same threat – these just didn’t cut it. Nor is there guidance to be had in hyper-nationalist perspectives, that had no notion of whites as an endangered in-group, and rather saw some particular nation as in competition with all others (merely including Jews).

Jews are and have been conscious of themselves as a collective with shared interests and enemies, while we have been unconscious. This has given Jews an enormous advantage over us.

From the publication of the Culture of Critique trilogy and the additional material that followed, we can say that at least tiny numbers of whites had for the first time a matching awareness. That’s quite new. Really, it’s a 21st Century phenomenon only.

Kevin MacDonald is a refreshing exception amidst the cowardice and ignorance that prevails today. MacDonald’s analysis is both comprehensive and coherent, but the general thrust – that the jews are biologically alien and conspire to advance their own interests, against the interests of their White hosts – is not new.

Many Europeans have seen the jews for what they are – implacably alien, harmful, an existential threat – especially since the Enlightenment. In Germany the National Socialists, the “nazis”, understood the jews in this way, and organized to defend themselves.

Reinfeld’s point about “hyper-nationalist perspectives” is that it plays into the divide-and-conquer tactics jews use. If Americans, Britons or Russians had awakened and recognized the jews as the Germans did then World War II might have been averted, or at least the jews might have lost. At any rate the world would be a very different place today.

Andrew commented on the previous installment:

I am unsure about the degree of Jewish self-deception versus conscious deception. I tend to side with Dr. MacDonald here. On the micro level, I am sure they know very well that they are slithery and deceptive in their conduct. But on the macro level, I think there is a lot of self-deception at play.

I see their need to destroy Europeans as an emotional compulsion that they are mostly not self-aware of. A circumspect, self-aware, not self-deceiving organism would not be hell-bent on destroying its host (or undertaking the other ultimately self-destructive policies that we see).

Note how difficult it is to believe that the jews are self-destructive and contrast this with the premise of the suicide meme, that Whites are inherently self-destructive. The truth is that no organism evolves to destroy itself.

Jews, like any group, exhibit a range of behaviors. Applying their favorite adage to their primary concern we could say, “Two jews, three opinions about what’s best for the jews.” Whites should be wondering whether it’s good for Whites that any jews are free to run around, pretending to be White, telling Whites what to think and do, regardless of whether all jews are hell-bent on destroying Whites, or why.

On the one side are jews like Tim Wise. Wise’s “White Like Me” shtick serves as the barest disguise for a resentful mischling who is quite literally hell-bent on destroying Whites.

On the other side are jews like Lawrence Auster. Auster was the quintessential “good jew”, a self-professed Christian convert, (neo-)conservative, and race realist. Like Wise, Auster insisted that jews are “white”, though only because he was hell-bent on defending the jews, and thought Whites could still be of some service to this end.

As I wrote in On Jewish Deception:

Self-deception, in its most literal sense, is about lying to oneself to protect oneself. It is a personal mechanism for dealing with a personal problem – avoiding mental anguish by mentally avoiding reality.

The primary problem for Whites is not in trying to distinguish between jewish deception or self-deception, it is White denial, the propensity of Whites to deceive themselves, to imagine ways to avoid facing the harm and pain caused by jewish deception.

“It’s not the jews! There is no jewish conspiracy. That’s just craaaazy talk.” This line of thinking is strongly and constantly encouraged by the jews. It is a line eagerly adopted by those who wish to avoid the very real pain the jews readily inflict on those who refuse to accept it.

Race as a Framework for American Jewish Identity

Jews had long been understood as a “race” in Western societies. According to Yosef Hayim Yerushalmi, racial terminology was applied to the Jews as early as the fifteenth century, when Purity of Blood Statutes were enacted in Spain to restrict Christians of jewish descent from holding certain privileges. By the mid-nineteenth century, the opposition between “Aryan” and “Semite,” which had grown out of the study of philology, had become an orthodoxy of racial science in Europe. In America, however, where racial theories grew in response to a history of colonization, slavery, and westward expansion, Jews did not become a primary focus of racial discourse. White Americans spoke of the Anglo-Saxon heritage that had endowed them with a talent for good government and contrasted themselves to African Americans, Native Americans, and other peoples of color. But despite the national preoccupation with these groups, by the mid-nineteenth century there were also a number of European immigrant populations—mainly the Irish, Germans, and Jews – who began to be referred to in racial terms as they became more prevalent on the American scene.

The evidence of just how distinct jews are from Europeans is in archaeology and biology as well as philology. This is beside the fact that jews are most clearly distinguished by the way they distinguish themselves. It was the collective behavior of jews and their quick rise to power that alarmed White Americans and distinguished them from other immigrants.

The “Purity of Blood Statutes” are also known as Limpieza de sangre. The Iberian Reconquista and Inquisition is one of many instances in history, better known than most, where jews were at least partly exposed, recognized for what they are: racial aliens living among and preying upon their hosts. As MacDonald put it:

Fundamentally, the Inquisition should be seen as a defensive reaction to the economic and political domination of these “New Christians.”

Jews have long been understood as a race because it fits reality. This understanding didn’t start in Spain or 19th century America. It started when the jews started. Even today jews euphemize their racial nature as “peoplehood”. They see themselves as a people connected by heritage, by genetic descent – a connection that transcends language, religious beliefs, or current place of residence.

Goldstein’s book could just as well have been titled “White Like Us”. Reading between the lines we find an expose of jews hyper-conscious about identity, obsessed not only with how best to see themselves, but how to best manipulate others into seeing them.