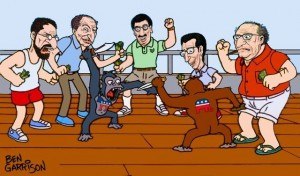 In Fear and Loathing and Treason – Part 1 and Part 2 I discussed the psychological motives and mechanics of the White traitors aiding and abetting the invasion and colonization of Europe by “refugees”.

(((Corey Robin))) has written an article for the Jew Republic, What’s in it For The Collaborators?, getting inadvertently at what I was try to get at more deliberately. I’ve just taken the liberty here of deobfuscating (in the current year even the jews admit “elite” is just code for “jews”) and excerpting those portions which well describe the interplay of host collaboration and jew parasitism:

By conventional understanding, a collaborator is one who assists an enemy, helping groups to which he does not belong threaten groups to which he does belong. But this definition, it seems to me, is too restrictive. It presumes that a group is a discrete whole, that once in it, we can’t get out of it or have competing affiliations. Collaborators, however, cannot be so neatly bound.

Whether we belong to one group or another in some existential sense, in the course of our lives we do incur moral obligations to our comrades and friends, whom we betray when we aid our opponents.

But to avoid the question of identity that restrictive definitions of collaboration entail, I will use the definition contained in the word’s Latin root collaborare: “to work together.” By collaborator, I simply mean those men and women who work with jews and who occupy the lower tiers of power and make political fear a genuinely civic enterprise.

The collaborator confounds our simple categories of jew and victim. Like the jews, the collaborator takes initiative and receives benefits from his collaboration. Like the victim, he may be threatened with punishment or retribution if he does not cooperate.

Many collaborators, in fact, are drawn directly from the ranks of the victims. Perhaps then we can distinguish between collaborators of aspiration, inspired by a desire for gain, and collaborators of aversion, inspired by a fear of loss. The first are akin to jews, the second to victims. But even that distinction is too neat. Jews also fear loss, and victims hope for gain, and as the economist’s notion of opportunity costs attests, the hope of gain often informs the fear of loss.

Collaborators serve two functions. First, they perform tasks that jews themselves cannot or will not perform. These tasks may be considered beneath the dignity of the jews: cooking, cleaning, or other forms of work. They may require local knowledge—as in the case of informers, who provide information jews cannot access on their own—or specialized skills.

Second, collaborators extend the reach of jews into corners of society that jews lack the manpower to patrol. These collaborators are usually figures of influence within communities targeted by jews. Their status may come from the jews, who elevate them because they are willing to enforce the jews’ directives. More often, their authority is indigenous. Figures of trust among the victims, they can be relied upon to persuade the victims not to resist, to compound the fear of disobedience the victims already feel.

Because their functions are so various, collaborators come in all shapes and sizes. Some travel in or near the orbit of jew power; others are drawn from the lower orders and geographic peripheries. One common, though unappreciated, influence upon their actions is their ambition. While some collaborators hope to stave off threats to their communities and others are true believers, many are careerists, who see in collaboration a path of personal advance.

Whether the payment is status, power, or money, collaboration promises to elevate men and women, if only slightly, above the fray.

Though ambitious collaborators like to believe that they are adepts of realpolitik, walking the hard path of power because it is the wisest course to take, their realism is freighted with ideology. Careerism has its own moralism, serving as an anesthetic against competing moral claims. Particularly in the United States, where ambition is a civic duty and worldly success a prerequisite of citizenship, enlightened anglers of their own interest can easily be convinced that they are doing not only the smart thing, but also the right thing. They happily admit to their careerism because they presume an audience of shared moral sympathy.

6 thoughts on “The Politics of Fear, The Psychology of Treason”