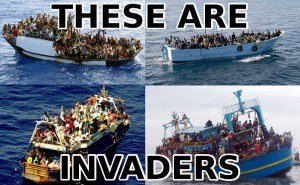 For years thousands of Africans and other non-Whites have been invading Europe, crossing the Mediterranean ocean by boat. Rather than turning these boats around, or simply sinking these invaders, European security forces, ostensibly sworn to protect their countries from invasion, have been increasingly more likely to “rescue” the invaders, to help them ashore, feed them, and release them to do as they please in Europe.

Why do European governments permit this invasion? I’m sure the details of the incidents and legal arguments are complicated and confusing. But to put it simply, it happens for the simple reason that the invaders aren’t offically regarded as invaders, but instead are described as innocent victims, “refugees” who are just looking for a better life for themselves and their families. And the simple reason for that is treason. The governments are operated by aliens and indigenous traitors who demonstrate by their words and deeds that they place the interests of alien invaders above the indigenous Europeans.

François Crépeau‘s bio at McGill says he is:

the Hans & Tamar Oppenheimer Professor in Public International Law at the Faculty of Law of McGill University. In 2011, he was appointed United Nations Special Rapporteur on the Human Rights of Migrants.

The only real solution to Europe’s migrant crisis is to let everyone in, by Dylan Matthews at Vox, 21 April 2015.

VOX’s Dylan Matthews: Ending Europe Forever Is The “Only” Solution To Migrant Crisis, by James Kirkpatrick at VDare, 22 April 2015.

A Swedish MEP [Cecilia Wikström] is stepping up a pan-European cross-party campaign for “legal and safe routes to Europe” for migrants in the wake of the latest Mediterranean boat disaster.

I think that my children and grandchildren are going to ask why more wasn’t done to help people running away from Isis, or violence in Eritrea or wherever, when we knew that people were dying in their thousands. People will ask the same question they did after the war, ‘if you were aware, why didn’t you do something?’. In Sweden we allowed our railroads to be used to transfer Jews to Nazi death camps.

Will Africa’s Northern Sea be the Mediterranean or the Baltic?, by Steve Sailer, 23 April 2015.

80 thoughts on “Fear and Loathing and Treason – Part 1”