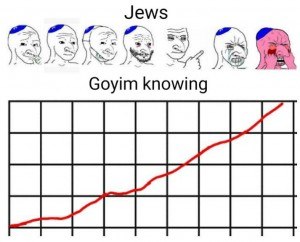 What a difference a current year makes. The jews are genetically and psychologically alien to and alienated by Whites. Naturally the jews blame Whites for this. Unnaturally, so do many Whites. The objective truth is that what the tribe of Seinfeld and Weinstein regard as normal is seen as abnormal by Whites. And when the jews screech about Whites being normal, ooooy veeeeeeyyyy, that’s just the jew normal.

In fact, it’s really stupid of the New York Times to have published an article that comes off with no irony. It’s lots of fun for Twitter-ers, and the Atlantic has already run a parody, but to a huge number of people this piece normalizes anti-Semitism, racism, and white supremacy.

Things are so bad now at the Times that they had to reference “the widely accepted estimate” of the six million Jews who died in the Holocaust with a link. Just in cause you don’t believe them.(The link is to Haaretz, which I’m sure every white supremacist believes.)

You know, the Holocaust, what Mel Gibson called “a numbers game.”

Dean Baquet, editor of the New York Times, this didn’t work. It’s disgusting. Talk about alienating your base.

NY Times article shows how not to write about neo-Nazis | Jewish Telegraphic Agency:

Too often he relays one of Hovator’s “uglier” ideas without explaining why they are vile, as when Hovator is shown “defending his assertion that Jews run the worlds of finance and the media, and ‘appear to be working more in line with their own interests than everybody else’s.’”

Fausset doesn’t comment on these assertions — presumably because the reporter feels that readers will need no reminder how awful they are. But maybe that presumption no longer holds. Maybe we need a sentence or outside source saying something like this: “Those kinds of conspiracy theories are at the heart of Western anti-Semitism, and formed the basis for the ideology, revered by Hovater, that justified the systematic slaughter of 6 million people.”

I’ve often argued that the strength and weakness of The Times is that it often acts as if it is having an “insider” conversation with the kinds of readers who form its core, or idealized, audience: liberals, the affluent, the highly educated and, yes, Jews. That assumption leads to highly critical Israel coverage, for example, because this is the way “family” talks with one another.

In this case, it led editors to assume that readers would read a portrait of a neo-Nazi “normie” as a cautionary tale about the mainstreaming of hate. But it forgot about a wider audience that still needs a reminder that some ideas are not merely “ugly” but vile, abhorrent and fundamentally un-American.

How dare these uppity goyim who don’t even read the Jew York Times doubt the six gorillion?

18 thoughts on “The Jew Normal, Screeching about Whites being White”