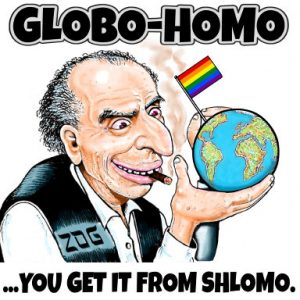 In the comments on the previous post I made the somewhat flippant claim that the Enlightenment was all along a jew-led, jew-serving psyop. Fred W, a frequent commenter whose opinion I respect, asks:

How you can reach the reach the above idea, I don’t understand.

Even before Fred asked I had already expanded on my claim, stating that the essence of the so-called Enlightenment is that the goyim must never think or speak or act as the jews do, because jews. The only rationale ever offered for the system is that it serves the interests of “humanity”, i.e. the jews. Consult any mainstream discussion of the Enlightenment if you doubt this. Most of my readers are well aware of this and other games jews play with words, but here’s a bit on the meaning of “humanity”.

We can easily get lost in the weeds trying to define the Enlightenment and it’s key figures. The thrust of my argument, however, is elementary. Cui bono?

If you’re interested in getting lost in the weeds anyway, consider the bragging of jews, provided by Andrew Joyce. Here’s a taste:

I explore what is arguably the most ambitious effort yet attempted to create a Jewish icon for the non-Jewish world. In this, the case of Baruch Spinoza, I will outline the history of the Jewish effort to place him at the very heart of the Enlightenment, and to crown him as nothing less than the founder of the modern West, and even of modern democracy itself.

In [Jonathan] Israel’s words: Spinoza and Spinozism were “the intellectual backbone of the European Radical Enlightenment everywhere.”

I disagree with Joyce’s interpretation, that this effort from jews is a false exaggeration. Like most White men, Joyce sees the Enlightenment favorably, as a product of by and for White men. I see it more as typical jew arrogance, as the criminal claiming responsibility, boasting about their crime long after they imagine anything can be done about it.

The psychological failing here, the vector or vulnerability enabling the psyop, is apparently endemic to Whites. It is this peculiar recurring pattern of being hoist with the enemy’s petard, while jealously clinging to it as if it is your own. We see it also in (((the British Empire))), for example. It is a pitfall I’ve called racial solipsism.

I see the Enlightenment negatively. I see it as a watershed moment when White men, deluded and debilitated by Christianity but starting to wake to reality, tried to cure their hangover. Unfortunately, they ultimately did so by doubling down on the jew narrative, looking to the jews for answers to problems that jewing had caused. Whatever the details, they came to the conclusion that the answer was tolerance. The world was broken and the White man needed to fix it, and that meant…emancipating the jews, who then quickly helped themselves by helping the White man decide to emancipate the negroes, women, homosexuals, and so on. The disastrous consequences are exactly those things that the jewsmedia today most emphatically celebrates – feminism, open borders, sexual deviance, black lives matter, and the never-ending wars to keep the world safe for jewing.

There are people who purport that this is all about the White man trying to kill himself. They claim that all this pathology proves we’re suicidal. I disagree. I see the pathogen as jewing. I see jews bending the arc, as they put it, toward White replacement and extinction. They have made the highest purpose of every government they control to combat “racism” and “anti-semitism” while boycotting, imprisoning, or dropping bombs on whoever vexes the jews-first jews-only state. Proponents of this system call it “liberal democracy” and they trace its origins to the Enlightenment. In fact it is rule of by and for jews, and its roots go back much farther.

Here’s another recent claim of responsibility for the Enlightenment, with jews mischaracterizing themselves as the victims of their much less conscious Christian dupes, of course:

The development of the study of Jewish texts and Jewish culture within the university setting, as opposed to in a yeshiva or rabbinical academy, was by its very nature tied to the emancipation of the Jews in modern Europe, and their concomitant entry into broader European culture. As Martin Goodman notes, the earliest professors of Jewish literature in European universities were Christian professors of classical Hebrew, who claimed that their study of Hebrew language and literature could help them to discover the “true” (and invariably Christian) meaning contained within the text they called the Old Testament.

By the late Renaissance, Christian Hebraists in the university setting became interested in Kabbalah, part of a broader academic trend in which Christian scholars claimed that a whole array of esoteric literature, ranging from Zoroastrian and Hermetic texts to Egyptian hieroglyphs, could be interpreted to reveal Christian insights.

More on cabalism and its influence is coming in The Burden of Jewing, Part 3.

You might be thinking the Enlightenment is ancient history. But that’s where you’re wrong, bucko. The most vociferous proponents of Enlightenment/”classical liberal” thinking today are jews like Stephen Pinker, Dave Rubin, Ben Shapiro, and the broader jew intellectual movement calling itself the Intellectual Dark Web. They can clearly see a backlash building to the increasingly naked anti-White screeching of their “leftist” cousins. Their response is classic bagelian dialectic. Rather than call out their cousins’ jewing as jewing, they instead pine for a return to its previous, more cryptic form. They seek to moderate the White reaction to jewing, and they are doing so by encouraging still more Enlightenment thinking among Whites. They’re not doing this to hijack the credit for and esteem of what the deluded White man imagines is muh Greatest Achievement. They are doing so because they sense that the White man’s capacity for soft-headedness is not yet completely exhausted.

The Enlightenment was all along a jew-led, jew-serving psyop. Indeed, it is all the more obvious now in retrospect, now that jews no longer think there is any need to hide it.

In a remarkably explicit and expansive claim of responsibility, published in 2002 and titled The Jewish Roots of Western Freedom, Fania Oz-Salzberger jewsplains “the story of political Hebraism, the sustained effort to read the Bible politically during the seventeenth century”:

This essay attempts to point out some of the most interesting, most thought-provoking, and least studied Hebraic and Judaic origins of early modern political thought in England and beyond. It will examine several political Hebraists of the seventeenth century, and will consider the reasons for the abandonment of biblical and post-biblical sources of political thought by Enlightenment and post-Enlightenment thinkers—in particular modern liberals.

Jewish texts were not accidental sources for the subtle discussion of liberty engaged in by seventeenth-century thinkers. There were several important ideas about the nature of freedom, which early modern Europe learned from the Bible and its Jewish interpreters, and from them alone. These ideas, which Enlightenment thinkers and their progeny either abandoned or ignored, have now returned to the forefront of political discourse, and are relevant in no small measure to contemporary Israel as well.

Seventeenth-century thinkers used their Bible in a multitude of ways: There were biblical royalists, biblical republicans, biblical regicides, biblical patriarchalists and defenders of the old order, biblical economic revolutionaries and deniers of private property, biblical French imperialists, biblical English patriots, and their biblical Scottish counterparts. Policies, polemics, and parodies were based on the Bible. Writers and readers alike were intimately familiar with the Old Testament.

In Protestant Europe and in much of counter-Reformation Europe, it was the central compartment of a learned man’s toolbox, the principal weapon in his scholarly arsenal

What all of these had in common was their stout belief not only in the supreme importance of the Hebrew Bible as an authority for their convictions, but also in its uniqueness as a source of historical models. Since Calvinists and Puritans, monarchists and monarchomachs, French and Dutch and English alike all viewed themselves as the “second Israel,” the ancient Hebrew state was their best political template, if not their only one. Not Athens or Sparta or Rome, but Israel, with its kings and priests, its tribes and elders, its institutions and, especially, its laws.

the tradition of religious tolerance that was transformed by Spinoza and Locke into a doctrine of political tolerance.

A highly inﬂuential group of seventeenth-century thinkers found within Hebraic sources a cluster of significant ideas, and put them into the mainstream of European intellectual history. These thinkers, and the ideas about which they wrote, were linked to one another in several ways. The following sections of this essay discuss three seminal ideas, explicitly and often exclusively Hebraic in their inspiration—ideas for which Aristotle, Cicero, or Tacitus (among others) could not reasonably be credited— which played a crucial role in the genealogy of modern political thought. They affected early modern thinking about the state and about political liberty, and took part in the birth pangs of classical liberalism itself.

Seventeenth-century Amsterdam was the most fertile soil for social and scholarly interaction between Jews, primarily exiles from Spain well versed in classical thought, and Christian scholars, primarily Calvinists with a Hebraic fire burning in their bones. In the Dutch golden age, the “Hebrew republic” took shape as an ideal type for the modern European legal and political system. Grotius was one of the first to search for the Hebraica veritas, the Hebrew truth, a natural law common to all nations.

The glory of the Hebrew republic in Western political thought reached its apex in the middle of the seventeenth century, when the English republican revolutionaries made it their central historical model, some-times alongside the Roman republic, but more often above it.

These thinkers all repeat, with individual variations, the same basic theme: The people of Israel had a republic, a nearly perfect republic, from the time of the Exodus until at least the coronation of Saul.

105 thoughts on “The Enlightenment: Good for Whom?”