I like good cheer. But please do not wish me “Merry Christmas.” It’s wonderful if you celebrate it, but I don’t — and I don’t feel like explaining that to you. It’s lonely to be reminded a thousand times every winter that the dominant American cultural event occurs without me.

To write “I don’t feel like explaining” while doing just that is like saying “yes” while shaking your head “no”. Ioffe brims with irrepressible loxism that she certainly does feel like expressing. It’s just that she also feels that she can’t be completely honest about why. Ioffe could have said, “As a professional member of the ruling tribe, I feel entitled to spell out how you mindless goyim need to reorganize your society to suit me.” Instead she said:

When you are from a minority religion, you’re used to the fact that cabdrivers don’t wish you an easy fast on Yom Kippur. But it’s harder to get used to the oppressive ubiquity of a holiday like Christmas. “This is always the time of year I feel most excluded from society,” one Jewish friend told me. Another told me it made him feel “un-American.”

To say it’s off-putting to be wished a merry holiday you don’t celebrate — like someone randomly wishing you a happy birthday when the actual date is months away — is not to say you hate Christmas. It is simply to say that, to me, Julia Ioffe, it is alienating and weird, even though I know that is not intended. I respond: “Thanks. You, too.” But that feels alienating and weird, too, because now I’m pretending to celebrate Christmas. It feels like I’ve verbally tripped, as when I reply “You, too!” to the airport employee wishing me a good flight. There’s nothing evil or mean-spirited about any of it; it’s just ill-fitting and uncomfortable. And that’s when it happens once. When it happens several times a day for a month, and is amplified by the audiovisual Christmas blanketing, it’s exhausting and isolating. It makes me feel like a stranger in my own land.

Ioffe admits she’s saying what she’s saying because she’s a jew, she just adds the usual thick layer of reality-inverting jew victim narrative on top. Sure, she’s a member of the most privileged and powerful tribe in the world, but they’re a MINORITY. That makes you goyim the real problem. You make jews feel UNCOMFORTABLE. You make jews feel like STRANGERS. You make jews feel OPPRESSED, ALIENATED, EXHAUSTED, ISOLATED. And worst of all, you just being yourselves forces jews to pretend they’re not jews. Which is why they write articles like this. Every day of the year may be Holocaust Day, but every now and again jews need a different pretext to jewsplain how their jewy hostility toward the goyim is really all the goyim’s fault.

When I tried to explain this on Twitter, I earned thousands of attacks: people vindictively wishing me a Merry Christmas, vicious and ad hominem condemnations accusing me of being angry, whiny, impolite, self-centered, ungrateful, sad and, in general, a bad person. (“We’ve already got a reputation for being miserable f—s,” one Jewish commenter wrote, “let’s not make it worse.”)

I find this surge of hostility baffling. To voluntarily opt out of Christmas, apparently, is an act of aggression against Christmas itself.

What Ioffe didn’t want to explain, at first, was that she was thinking and speaking as a jew. Then the vindictive goyim attacked her for no reason. So now she’s trying to jewsplain. “As a jew, I’m the real victim here. Stop being so hostile you filthy mindless goyim.”

There’s something a little deranged about taunting someone of another faith with “Merry Christmas” after they’ve politely asked for a recusal. It feels out of step with what Christians say this holiday — and Christianity — is all about: peace, love and mercy. It feels, instead, to be of a piece with the warring tribalism that has consumed our politics.

How, I was asked, are people meant to know what you celebrate? They’re not. Which is why my wish, this holiday season, is for people not to make assumptions about others, to put themselves in others’ shoes, to respect others as they wish to be respected, to respond with kindness even when they disagree, to live and let live. I heard about a guy who used to say all that stuff, and apparently his birthday is coming up. Why not honor him that way?

You know what’s deranged? Trying to paint yourself as a victim while telling others they annoy you and should change their behavior to please you. It’s disgusting to contemplate, but it isn’t difficult to understand this victim/control-freak mentality. In individuals the symptoms are commonly described as antisocial personality disorder. Such individuals feel no empathy for others, but they understand how to manipulate others to feel empathy for them.

Though Ioffe lamely attempts to personalize her story, she isn’t standing on her Washington Post soapbox as an aggrieved individual. She’s speaking as a member of her tribe, “from a minority religion”. That’s the key to her identity, the magic jew card that, in their minds, fills them with righteousness and moral authority. She may have no empathy for the Christians (by which she means Whites) whom she’s collectively complaining about, but clearly she understands how to moralize, to shamelessly exploit whatever sense of honor, respect, or kindness the gullible goyim will show her.

Furthermore, Ioffe has previously described just how self-aware she is about this, how she knows it has more to do with race and nation than religion:

Personally and not because I’m a pessimistic Soviet Jew– personally I was kind of glad to see the outpouring of antisemitism, because for a long time I was very frustrated by the discussion on kind of the liberal side of the political spectrum, where Jews, like Israel, were no longer seen as the underdog, no longer seen as the persecuted minority, in fact, this kind of scurrying line of anti-Semitic stereotype of us as the establishment, and people who run and control everything…. I had black friends, for example, black intellectuals who say, “Our issue is the more important one, we are the persecuted minority, you’re part of the establishment, you are white,” and to me seeing that reaction, that seeing that anti-semitic reaction that came with Trump I think got those people to kind of see us again as the minority… I think that people are recognizing that we’re still kind of in the same boat…I’m seeing it as a little reminder to people.

Ioffe doesn’t see jews as White, she sees jews as victims of Whites, “in the same boat” with other non-Whites, against Whites. She likes the “persecuted minority” narrative, the jews’ oldest, biggest lie. She promotes it, and is glad to see others influenced by it, because she sees the value in that for herself and her tribe, not because she believes it’s true.

First, let’s listen to a jew explain what Passover means to the jews. “We can’t let them win”: Passover is more than a holiday — it’s a call to arms against oppression:

Passover is more than just a holiday. It’s a call to arms. I have realized and maybe you did, too, even before the election laid bare the fight we would face, that above all else Passover is the story of a successful uprising against tyranny. It is a story dripping with hope, one that inherently looks to the future — a story we need this year in America more than ever.

As a people, we Jews have historically led the resistance against intolerance and persecution, from championing the civil rights movement to standing up against authoritarianism in all its guises. We have always sought a better world, not only for ourselves but also our children. This Passover we must come together, urgently, to sit among friends and family and listen to the unprecedented story of a profound resistance. We must remember that we have faced dark times before — in Egypt, in Spain, in Auschwitz — and that we have outlasted them. We will outlast these dark, turbulent times as well, not just because we continue to stand on the right side of history, but also because, as targets of hate and survivors of it, we know exactly what’s at stake if we fail.

This is a concise, precise formulation of the jew narrative. It clearly indicates the jew-centric origin of the most powerful weaponized buzzterms used against Whites today – “intolerance”, “persecution”, “civil rights”, “authoritarianism”, “seeking a better life for ourselves and our family” – and connects it directly to the long string of hosts jews have previously infiltrated, exploited, and ultimately exterminated.

Jew holidays are nothing more and nothing less than a regular opportunity for “the jewish people” to remind each other of their conspiracy against everyone else, and to celebrate the tremendous advantage their jew-righteous jew-justifying jew-first mindset gives them in that fight.

Now listen to how the jews’ narrative is distorted and misinterpreted by the jews’ most powerful servant and millions of his witless Christian supporters. President Trump Easter Holiday Message To The Nation:

This week, jewish families across our country, and around the world, celebrate Passover and retell the story of God’s deliverance of the jewish people. The story of the Exodus is a story of freedom. It is the story of an incredible people who were liberated from oppression and raised up the face of humankind.

Down through the centuries, the jewish people have lived through one persecution after another–and yet, they persevered and thrived and uplifted the world beyond measure. And now, the state of Israel stands as a monument to their faith and endurance.

The jews’ hostile particularist us-versus-them narrative has been transformed into an Animal Farmish jews-are-the-best-of-us form.

Whereas jews see Whites (Christian or not) as alien enemies whose mere existence amounts to oppression, Whites misinterpret jews not only as friends but as moral superiors who have been unjustly persecuted. Whereas the view jews share with each other emboldens and empowers them, the delusions jews encourage among their hosts confuse, demoralize, and ultimately destroy them.

During his selection campaign, the kikeservative-in-chief often reminded his supporters of the dangers of such destructive behavior by recounting the ancient European parables of The Trojan Horse and The Snake. And as usual for dire warnings about “pathological altruism”, the fatal conceit of Trump’s enraptured audience was that he was talking about somebody else’s error. 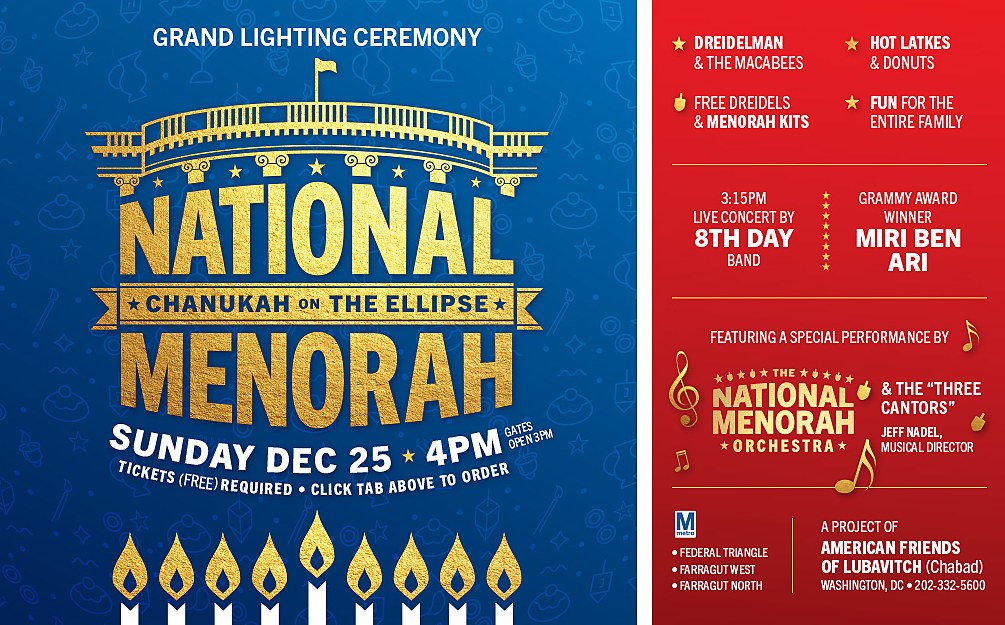 National Menorah | About Us:

The lighting of this menorah – the world’s largest – is attended by thousands every year and seen via TV newscasts, internet feeds and other media by tens of millions across the nation and around the world, many of them hundreds of miles from any Jewish community.

Indeed, this menorah has become a premier national and even international symbol of the festival of Chanukah, inspiring many communities across the globe to sponsor more and greater public menorah lighting ceremonies of their own. After all, this is the essence of the celebration – to increasingly proclaim and celebrate the miracle of Chanukah – The Festival of Lights, in the most public manner possible.

In this way, we actively reaffirm the celebration of our freedom, inspired by the historic and present victory of right over might, light over darkness, and understanding and justice over intolerance and bigotry. 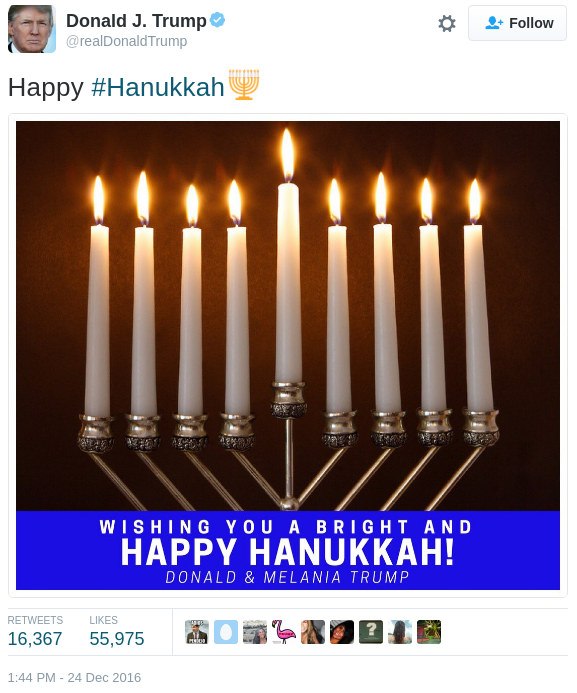