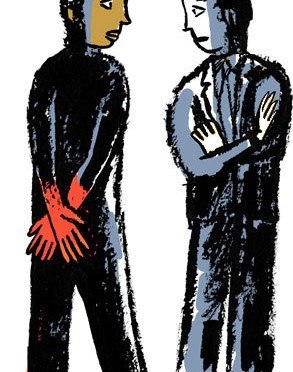 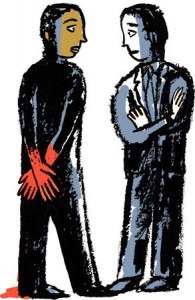 Letter to the White Race, ostensibly written from the point of view of a non-white, provides a fair summary of how impotent and defeated Whites have been made to appear.

This is facilitated by decades of brainwashing, beginning in early school years, portraying Whites not as the builders of a great civilization, or the admirable leaders of the Free World, but in a lopsided, entirely slanted way as oppressors, enslavers, genocidal “Nazis”, southern Klansmen, imperialistic Colonials, and toothless hillbillies just itching for a chance to lynch the first colored individual that comes along. This brainwashing not only inflames the minorities in these now racially-mixed “schools”, but also inculcates a sense of “White guilt” that the Out Group finds particularly useful in maintaining control.

Just weeks before the history-making 2008 presidential election, the first in which any political party has nominated an African American as its candidate, Discovery Channel presents a one-hour special on race in America. Some commentators are now speaking of a “post-racial” period in American history. While the nation has come a long way on the road toward racial equality, there is still much left to accomplish.

It is a prime example of Out Group brainwashing.

The documentary focuses on a Ku Klux Klan-related murder that took place in Mobile AL in 1981. Ted Koppel, who is jewish, interviews 1960s “freedom rider” and current congressional representative from San Diego, Bob Filner, who is jewish, and the SPLC’s founding hate-crusader Morris Dees, who is jewish. The moral of the story: Whites are lynch-happy racists – but we can redeem ourselves by voting for Barack Obama.

Daniel M. Gold writes in his New York Times review: “The past is never dead. It’s not even past.” And concludes his critique-free review with this:

In these accounts Mr. Koppel offers inspiration and a tribute to an event — the nomination of a black presidential candidate by a major party — that many had not expected in their lifetime. Yet “The Last Lynching” also conveys how close to the surface racial resentments can lie, and how easily they can be channeled into blind rage. In the end the program is as much cautionary tale as celebration.

Racial resentments indeed. This documentary is an excellent example of anti-White resentments motivating jews to not-so-subtly nurse black victimology and channel black resentments against Whites. When their man doesn’t win in November, whose “blind rage” is more likely to spill over? The blacks polling 95-1 for Obama and threatening race riots, or the Whites polling 55-40 for McCain who dare not make a peep about jews like Harold Meyerson who openly say “whiteness is a huge problem”.

In The Last Lynching the mendacity begins at the beginning with a cliched glossing over of the history of lynching in America. Quickly flashing images and carefully selected words convey the impression that only blacks were hung, and that none of it was just or warranted. Some 5000 who were lynched between the civil war and the 1930s are described only as “victims” – as if they were all selected at random, or simply because they were black. There is scant mention of the victims whose rape or murder instigated more than a few of the lynchings.

In glossing over this past Koppel even brazenly refers to The Birth of a Nation, a 1915 film that tells a quite different story from his own. Koppel and friends used snippets of the film to flesh out their characterization of hooded Klansmen mindlessly murdering random negroes. They’re counting on modern day viewers not to know the film’s story and not to know that the Klan rose from the post-war chaos in reaction to the depravities and injustices visited upon southern Whites. As late as 1915 most Whites still knew this history and celebrated the KKK, but even by then racial resentments were brewing:

When Griffith released the film in 1915, the National Association for the Advancement of Colored People (or NAACP) and other groups protested; the NAACP published a 47-page pamphlet titled “Fighting a Vicious Film: Protest Against The Birth of a Nation,” in which they referred to the film as “three miles of filth.” W. E. B. Du Bois published scathing reviews in The Crisis, spurring a heated debate among the National Board of Censorship of Motion Pictures as to whether the film should be shown in New York. However, President and former history professor Woodrow Wilson viewed the film at the White House and proclaimed it not only historically accurate, but like “history writ with lightning.” Like Woodrow Wilson, many whites felt it a truthful and accurate portrayal of racial politics, so much so that they flocked to join the rejuvenated Ku Klux Klan. The years after Griffith released The Birth of a Nation saw massive race riots throughout the country, peaking especially in the North in 1919; many historians lay the blame for this racial conflict on Griffith’s The Birth of a Nation.

What happened between then and now? Well understanding that the early NAACP was organized, funded, and led by jews helps explain. It seems WEEJs (white eastern European jews) had an axe to grind with the WASP elite. It seems these WASPs were a wee slow in handing over control of the nation their forefathers gave birth to. After almost a century of “culture war” those busy little WEEJs are still grinding away. Today “KKK” is an epithet, and jews are making documentaries to explain how the ever expanding racial conflict they’ve poured gasoline on is all for the better. The only threat to their utopia are racist Whites itching to once again start lynching at random.

If jewish influence in the media were not so strong, or if jews did not so uniformly resent Whites, then perhaps today’s mainstream journalists and pundits would not so strongly and uniformly insist on inverting reality. The reality of post-KKK, post-Jim Crow, post-White, jewish-dominated America is black on White violence:

Mapping The Unmentionable: Race And Crime
February 13, 2005
By Steve Sailer

THE RACE WAR OF BLACK AGAINST WHITE
Paul Sheehan
From the Sydney Morning Herald, May 20, 1995

Guy White calls out “liberal” Tim Wise on his “lying” and “false logic” about this reality. Guy makes sense, except in failing to note that Tim Wise is a jew who makes a living channeling racial resentment towards Whites. Jewish race-based indifference, hostility, and even genocidal feelings toward Whites, no matter how hard we might wish to avert our eyes and pretend jews are “White Like Me”, is another harsh reality the media won’t discuss.

If an atypical murder from 1981 rates a prime-time documentary, then when might Ted Koppel make a documentary exploring the racial resentments behind the quadruple murder in Wichita, the rape/torture/murder of Christopher Newsom and Channon Christian, or the sickeningly common racial murder and rape of White women in America? When might Bob Filner spend time on a bus or in a jail cell for the benefit of White victims of racial violence? When might Morris Dees hound black rapists and murders in court?

I think they’ll get around to these things right after making a documentary guilt-tripping jews for their involvement in the biggest fraud in history.

In other words: never.

UPDATE 15 Oct 2008: The image at the top of this post is a corrected version of the reality-inverting original that was attached to a Slate essay from May titled In Praise of Liberal Guilt – It’s not wrong to favor Obama because of race. In that essay Ron Rosenbaum, who is jewish, delivers virtually the same message as Koppel/Filner/Dees: Whites should feel guilty because of slavery, lynching, and Jim Crow. We should feel guilty about it forever. And because of it we should vote for Obama.

He also neglects to address the black on White violence occurring today.

We must recognize these attempts to guilt-trip us for events that occurred generations ago, to libel and damn us forever because of the race we are born into. We must recognize that these smears are not only false, they represent attacks made by people who wish us ill.

6 thoughts on “Not the Last Brainwashing”