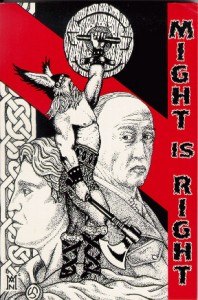 I’ll be live with Bill Rhyes this Thursday night, 2 July 2015, at 8pm ET (7pm CT) on his program, The Might is Right Power Hour. You can listen and call-in via TalkShoe. Chat via http://mightisright.net/. The mp3 download will be linked here when it becomes available.

We plan to discuss A Personal Disclosure, my role and focus, the White network, White suicide vs genocide, The 14 Words, Breivik, Roof, and more. Join us.

28 thoughts on “Talking with Bill Rhyes”