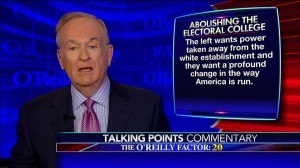 In their own ways Bill O’Reilly and Bill Clinton have just highlighted the defining character of the political zeitgeist – a clash of establishment narratives.

Referring to Trump’s selection, Clinton said, “He doesn’t know much. One thing he does know is how to get angry White men to vote for him.”

Referring to the jewed establishment’s response to Trump’s selection, O’Reilly said, “The left wants power taken away from the White establishment and they want a profound change in the way America is run.”

Trump and his campaign manager responded to Clinton. Trump, as usual, refused to even say the word White. Conway, rather than noting Clinton’s invective was anti-White, simply accepted his premise and responded in kind.

The jewed establishment’s response to O’Reilly has been to shit on O’Reilly for having the temerity to defend the establishment, specifically because he imagines it is White. Bill O’Reilly rose to the defense of white privilege in America’s presidential voting process, from The Washington Post, and Bill O’Reilly, in Defending “the White Establishment,” Nails a Liberal Vision of America, from Salon, capture the gist of this response.

Both little Bill scandals are merely reverberations of the recently completed hyper-racialized selection process. To recap, the Clinton team went with an anti-White strategy. Meanwhile, the Trump team wanted White votes, but wouldn’t even speak to Whites as such.

The jewsmedia, which in effect served as part of the Clinton team, has been pushing two conflicting narratives before, during, and now after the campaign.

The first narrative – decrying “White supremacism”, “White privilege”, “institutional racism”, and even lowly working-class White voters – is based on the premise that the current establishment is White. The second narrative decries the same thing – Whites, specifically because they are White – but is based on the premise that Whites have been emboldened by Hitler 2.0 to rebel against the current establishment, which alarms organized jewry and the jewsmedia precisely because they perceive this as a threat to jews.

There is some truth in both narratives. The apparent contradiction is resolved by putting them together.

The Clintons and the Trumps and many other individual members of the establishment may look White but their words and behavior aren’t pro-White. They all recognize the difference White votes can make, but none will so much as speak explicitly in favor of Whites. And even when the Conways or O’Reillys do use the word White, it’s only because they have internalized and are regurgitating the anti-White premise they are responding to, not to defend Whites as Whites.

The larger truth is that jews aren’t White, they’re anti-White. The establishment is anti-White because it is so thoroughly jewed. That’s why members of the current establishment, whether they look White or not, won’t say anything positive about Whites or negative about jews. Those who do dare are denounced and excluded.

Jews currently rule and are pushing a genocidal anti-White agenda. This is what’s making Whites angry. The jewsmedia reports every aspect of this situation, they simply report it from a point of view entirely sympathetic to jews and other non-Whites, and antipathetic to Whites.

8 thoughts on “The Jewed Establishment is Anti-White”